The state of Nevada is considering a substantive change to its public sector pension system. AB190, a bill currently being considered in the state assembly, would introduce for new employees a hybrid pension plan while leaving current employees alone.

In consultation with The Terry Group, Reason developed a forecast for how the legislation would change Nevada’s fiscal position, taxpayer risks, and member benefits. We presented our findings in a hearing on April 15, 2015 before the Nevada Assembly Committee on Ways and Means. This is a summary of our testimony.

Our actuarial model of NV PERS allows us to analyze the long-term effects of AB190, as well as to assess the implications of the recently proposed amendments. When considering the effects of a pension reform bill there are three elements to consider:

The first consideration to consider are the fiscal effects of AB190. Our first figure shows a baseline model for NV PERS, combining both the Regular and Public Safety plans; this is what we project for the current system should nothing be changed for NV PERS AND should all actuarial assumptions be correct. 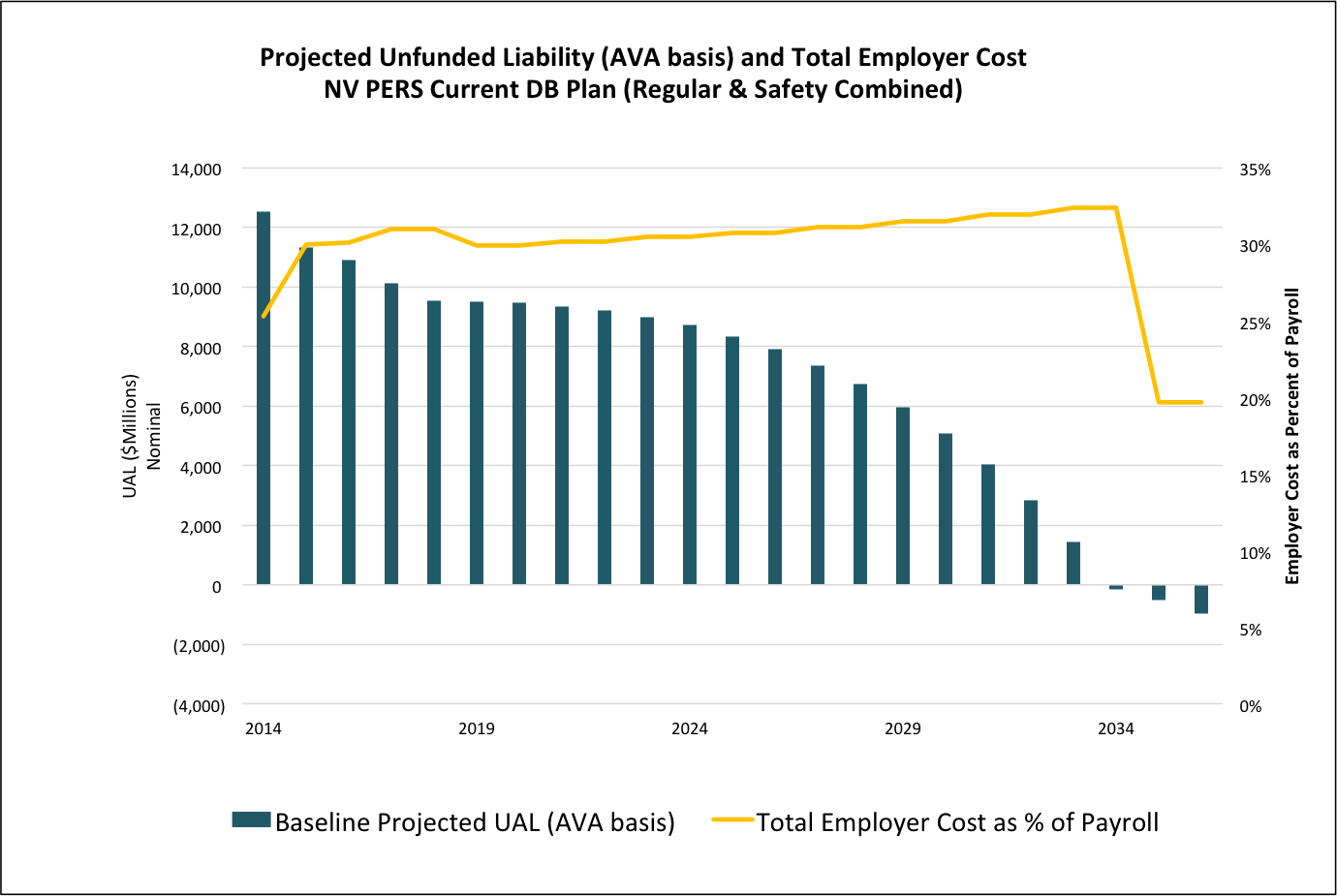 Given current assumptions, the unfunded liability (in the blue bars) is scheduled to be paid off by 2034. However, total employer cost-i.e. normal cost for funding benefits plus an amortization payment on the pension debt-for both Regular and Public Safety employee benefits is going to rise from the 23% of payroll in FY2014 towards 33% of payroll.

Even under this best case scenario, though, employer costs are set to continue to grow. Should investment returns underperform in the coming years, employer costs will be even higher.

AB190 addresses the challenge of growing employer costs. Our second figure shows the same data as before, but with two added lines. The blue bars continue to represent baseline projected unfunded liabilities. The green line across the top shows what unfunded liabilities would be under AB190 – it is essentially unchanged. The yellow line is again the growing employer costs under the baseline, and the juxtaposed orange line projected employer cost under AB190.

The primary fiscal effect of AB190 is to reduce the trend in growth of employer cost. By introducing a less expensive benefit (AB190 offers a smaller defined-benefit multiplier and a defined-contribution rate that cumulatively have a lower normal cost than current benefits), over time normal cost for NV PERS will fall. Combined with keeping the amortization schedule fixed, the result is that total employer costs will stabilize at around 27% of payroll for the next several decades. Combined normal cost during this period will fall from about 18% of payroll to near 10% of payroll.

We estimate that the savings as a result of AB190 would be substantial, as shown in the below table.

In the first fiscal year that AB190’s changes would be meaningful, FY2017, we anticipate employer cost will be $14 million less than currently projected. Over five years, we anticipate that a pension system as proposed in AB190 will cost taxpayers $216 million less than making no changes. And over 20 years, the employer cost savings from adopting AB190 will be around $2.4 billion.

The Change to Taxpayer Risks

The second consideration for AB190 is how the law reduces the risk that taxpayers are exposed to with a defined-benefit pension plan.

Defined-benefit pension financing is always going to have some associated risks. For example, the investment returns could be lower than anticipated, the discount rate could be inaccurate and cause under contribution, and/or people could simply live longer than the longevity assumptions. 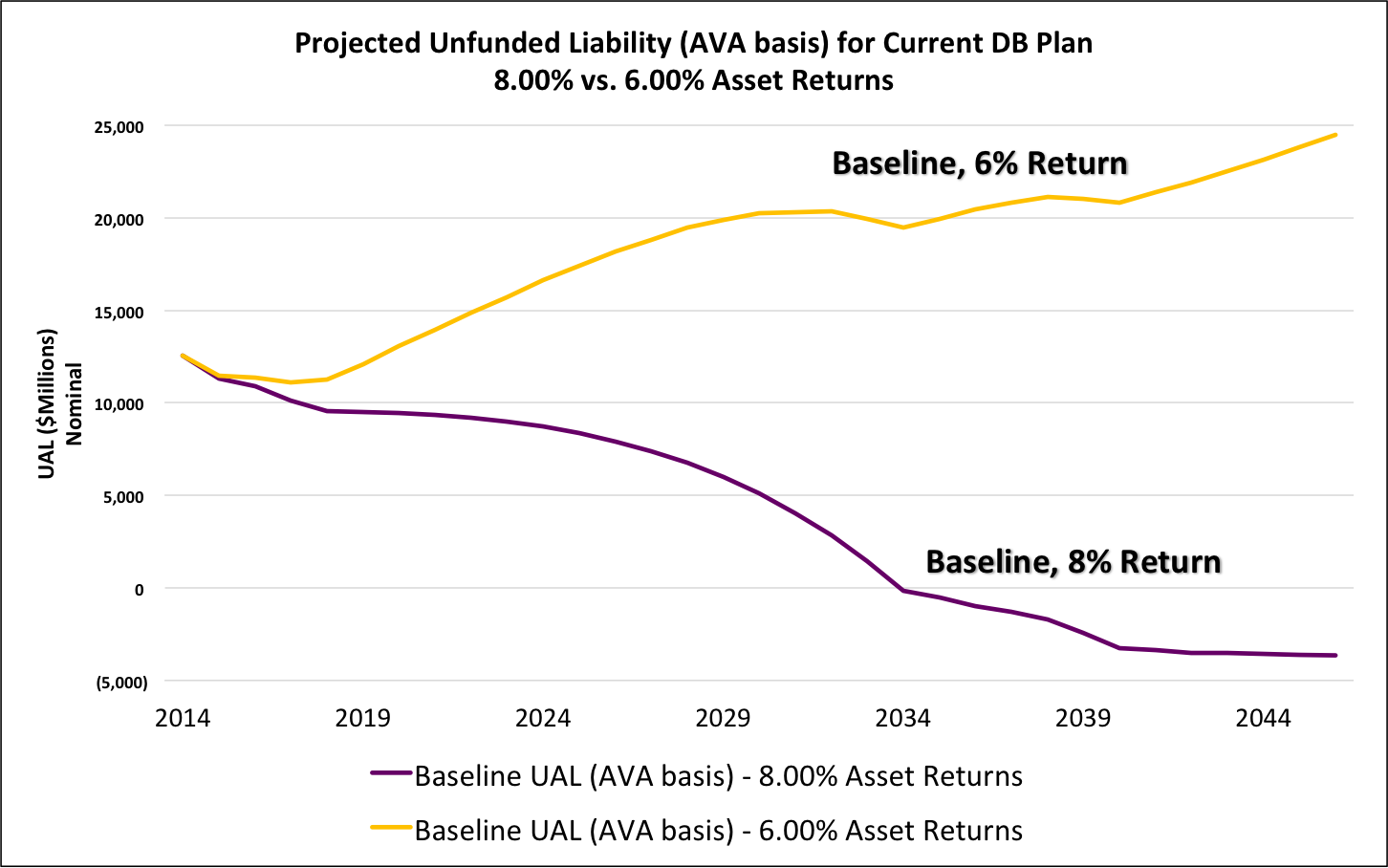 Notice that if investment returns underperform on average over the next few decades that the unfunded liability will skyrocket instead of declining. And this isn’t an abstract scenario-over the past decade the market returns of NV PERS have been just 6.91% (FY2004-2013) instead of the expected average 8%.

Now consider what would happen to the unfunded liability should investment returns have the same underperformance, but if AB190 were adopted. The next figure we show the same data as above, but with a line added for what unfunded liability would look like with a 6% actual return under a system reformed by AB190. 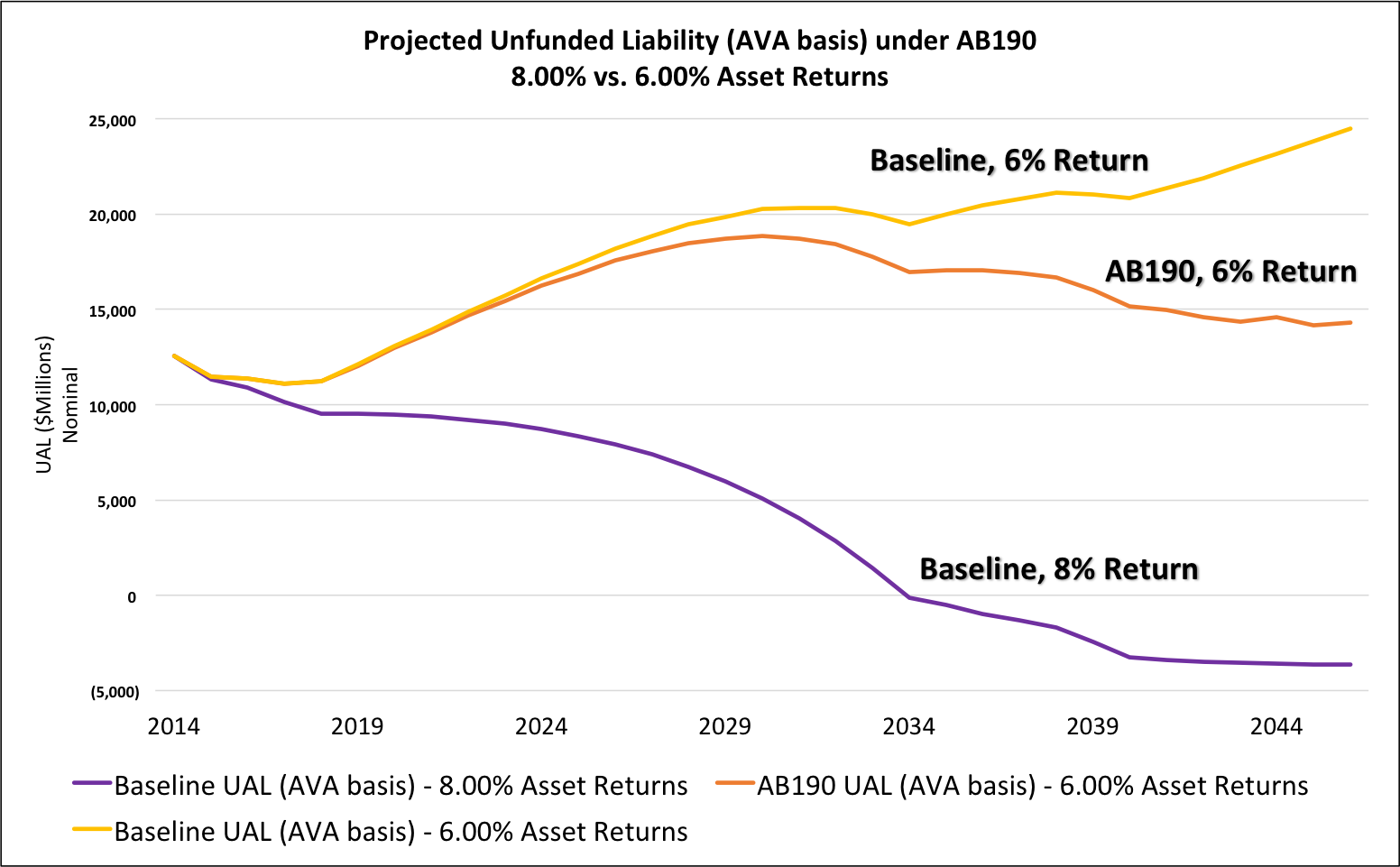 Because a hybrid system puts part of retirement benefits into “defined-contribution” accounts, the hybrid approach reduces the risks to taxpayers relative to a pension plan that is 100% defined-benefit. Funding DC benefits means having fixed employer costs. And taxpayers are no longer exposed to the risk of underwhelming investment returns with DC accounts.

In the figure above, we can see that debt is still going to rise (from the purple line to the orange line). That is just what happens when assumed returns are higher than actuarially valued actual returns over the long run. However, since over time hybrid employees will replace the legacy employees, and this means total defined benefit liabilities will be declining as well.

To put this in context, if investment returns are going to average 6% over the next 30 years, adopting AB190 would mean the difference between debt growing to $15 billion instead of growing to $25 billion. In short, AB190 helps to mitigate some of the financial risks of a DB pension plan.

The Change to Benefits

The third aspect of AB190 that we considered was how the new benefit structure of the hybrid compares to the benefits for current employees. The best way to consider the various kinds of employees as a whole is to look at how the benefits change in terms of the “replacement rate.” The replacement rate is a measure of how much of a worker’s current income gets replaced by the pension benefit. 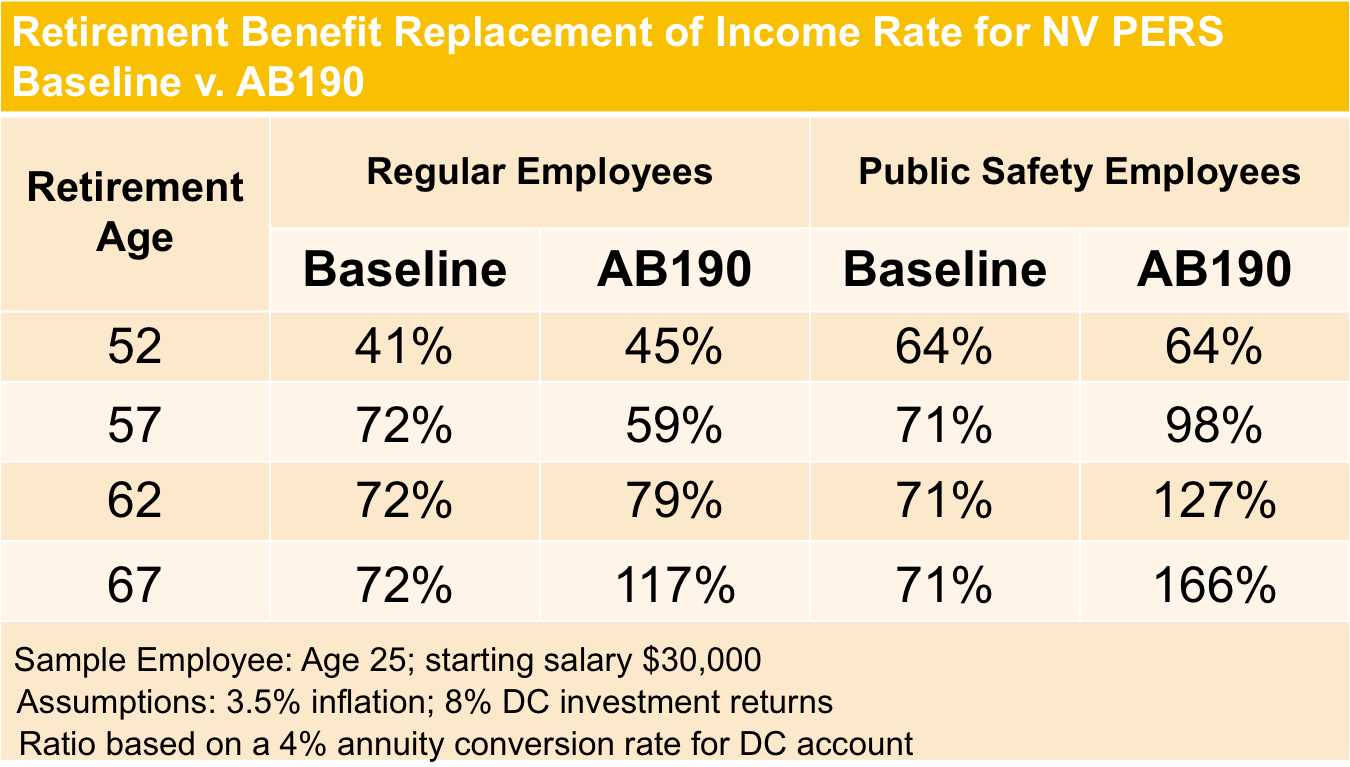 On the whole, though, we find that for full career employees, the replacement rate of the hybrid benefit is as good if not better than the legacy benefit.

Our actuarial model of NV PERS, and forecasting of how AB190 would change the baseline, yielded three key findings:

To be sure, if Nevada wanted to speed up the amortization schedule (as Segal proposed in its fiscal note attached to the original version of AB190), then taxpayers would wind up paying less on net in the long-run for pension debt. Just like paying off a mortgage faster than scheduled, increasing the amount paid now (roughly $700 million a year for the first four years) would mean the debt gets paid off much faster. However, the trade off is that near-term outlays would be larger than anticipated for the next few years. This is a policy decision that lawmakers need to consider, but for now, the amended version of AB190 directs the plan actuary to keep the amortization schedule the same, which allows for the cost savings of adopting a less expensive benefit plan to be realized.

A PDF of our presentation to the Nevada Assembly Committee on Ways and Means is provided below.

For any questions or media inquires, please contact Anthony Randazzo, director of economic research at Reason Foundation at anthony.randazzo@reason.org.