In the world of public policy evaluation, the strength of a research finding is only as good as the quality of data used in the analysis. When it comes to researching programs like state business incentives, where states offer tax breaks and other incentives to companies in exchange for them locating some of their operations in that state, good data and analysis have been rare.

But a recently completed study, “Evaluating State and Local Business Tax Incentives,” generated a proprietary database with the most accurate information to date on these types of business incentives programs. The study fills in some of the gaps of a well-known economic incentives database, called Good Jobs First Subsidy Tracker. The authors accomplished this by requesting official tax and budget documents from all 50 state governments as well as manually inspecting newspaper and other media reports for claims about things like the anticipated job numbers the incentives were supposed to generate.

With the new database, the authors, Cailin Slattery of Columbia Business School and Owen Zidar of Princeton University, conducted several interesting evaluations, finding that economic development incentives were not effective in their primary aim—creating jobs.

While we find some evidence of direct employment gains from attracting a firm via incentives, we do not find strong evidence that firm-specific tax incentives increase broader economic growth at the state and local level. We document an average growth of roughly 1,500 jobs within the specific industry of each deal. We don’t, however, see strong evidence of job growth in other industries or an effect on county-wide employment.

We also find a small effect on housing markets, with localities that attract new firms via incentives seeing, on average, a 4 percent decrease in house prices. This apparent decline in house prices provides some weakly suggestive evidence that the welfare effects of these subsidies might be negative on average.

Taken together, our findings suggest that any argument for the continuation of state and local business tax incentives must demonstrate that these policies improve equity, either by improving economic conditions in the most distressed places or by improving the well-being of underemployed and low-income workers. Whether or not incentives can achieve these goals more effectively than other policies remains an open question.

The study also finds that large and more profitable firms are more likely to receive incentives. This lends credence to the idea that even if incentives did “work” in the sense of creating jobs, larger firms would capture most of the benefits due to their higher resource capacity over small businesses. This would serve to further limit the economic benefits of the incentives to the area generally.

Another intriguing finding is that incentives appear to have strong political motivations. Slattery and Zidar find that incentives from state governments see a large increase in a year that the state’s governor is up for re-election.  The theory is that offering these incentives creates “ribbon-cutting” moments for governors to claim they have created jobs and economic opportunities for the state, which the governors and their political campaigns hope will aid them in that year’s re-election campaign.

I drilled down into the data for my home state, Florida, and found the data match this pattern. Former Florida Gov. Rick Scott, who doled out these types of business tax breaks and incentives while governor, was up for re-election in 2014. And as the study’s theory predicts, Florida’s incentive spending shot through the roof — to the tune of some $600 million dollars — as Scott ran for reelection in 2014. 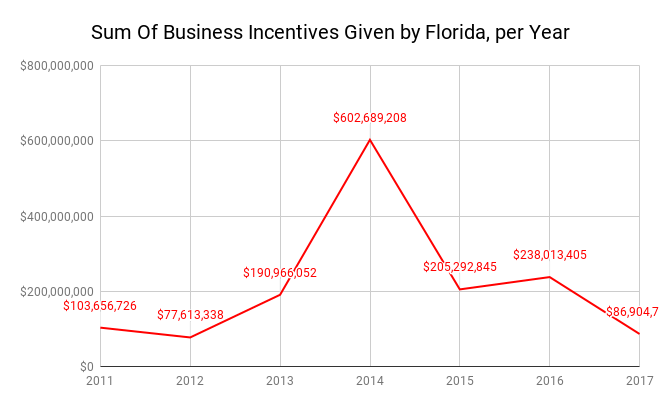 Accurate and complete databases like this can unlock more insightful analysis into government programs like business incentives, helping taxpayers and politicians understand their costs and impacts. That’s also why legislation like the federal bill S.1344, which would reform an incentives style program called Opportunity Zones, is so important and needed. The bill would create a standardized reporting form that all firms that participate in the program are required to fill out, making it easier to examine the program’s successes and/or failures.  While there is obviously no guarantee every form would be 100 percent accurately reported, it would render the current tedious data collection methods obsolete and create a much more complete database.

As it pertains to economic development incentives specifically, the better the data get, the worse the incentives programs look.

Myself and others have written about how current economic evaluation methods still lack quality data and methodological rigor that could be improved. States can take data standardization and financial transparency more seriously to generate more accurate evaluations of these tax breaks and incentive programs.

Taxpayers deserve to know exactly how much is being spent by governments on incentive programs and what the return on that public investment exactly is.