Over the past year, the Teachers’ Retirement System of Louisiana (TRSL) experienced a slight improvement in its financial health. According to the recently released 2019 valuation report, unfunded liabilities fell from $10.5 to $10.3 billion. However, a quick dive into the data suggests that there’s no cause for celebration, and the slight improvement is still far outweighed by the overarching concerns previously highlighted by Reason Foundation’s Pension Integrity Project.

Despite the $200 million drop in unfunded liabilities over the last year, TRSL’s multibillion-dollar legacy debt still remains. Underfunding at this level endangers future pension payouts, erodes pension security for public teachers, and crowds out spending on other priorities like teacher pay raises, classroom needs or after-school programs. As Reason Foundation’s Pension Integrity Project has previously shown, the latest drop in TRSL debt is simply a drop in the ocean of unfunded promises made to Louisiana’s teachers.

To put the figures from this latest report into perspective, in 1998 TRSL had less than half the debt ($4.11 billion) it has today ($10.3 billion), with government pension contributions increasing from around 7.7 percent of the Louisiana General Fund in 1998 to roughly 12.5 percent this year.

Our previous analysis indicated that the main culprit behind Louisiana’s rising pension burden —and most other states’ pension debt—is investment underperformance. To be precise, as much as two-thirds of the additional $6.3 billion in TRSL unfunded liabilities between 2000 and 2019 is attributed to investment returns underperforming relative to the plan’s investment return assumptions. 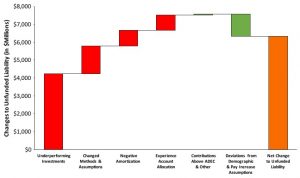 The 2019 data included in the latest TRSL valuation reinforces that trend. TRSL assets returned just 5.86 percent over the past year, well below TRSL’s own 7.55 percent return assumption. Despite the last 10 years, which saw a 10.3 percent geometric average return, being a net positive for TRSL, over the last 20 years the plan’s returns have only averaged 6.3 percent. These long-term investment losses have systematically starved TRSL of the revenue it needs to keep the plan on track to full funding. 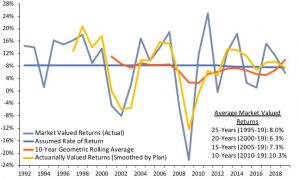 This is a testament to how TRSL’s assumed rate of return, which was recently lowered from 7.65 percent to 7.55 percent, is still too optimistic. TRSL’s 7.55 percent is well above the national median assumed rate of return of 7.25 percent. In fact, recent returns and economic forecasts suggest that a lower investment return environment is likely to be the “new normal”, anchored by slow economic growth, low inflation, overpriced capital markets, and low interest rates.

As pointed out in a recent Louisiana Legislative Auditor’s report, this “new normal” creates cash flow challenges (i.e. annual expenses outpacing contributions) for most mature state-level retirement systems, like TRSL. This often pushes pension plans to invest more heavily in riskier assets in search of higher yields, increasing the volatility in year-to-year investment returns. Each year that TRSL investments underperform its unfunded liabilities increase and the plan finds itself further off the path to solvency laid out by plan actuaries.

The volatility associated with riskier assets also limits the impact employer and employee contributions can have on prefunding pension benefits and paying down the system’s unfunded liabilities. For over a decade TRSL has maintained debt levels exceeding $10 billion despite a seven-year streak of making the full actuarially required contributions and the country experiencing the longest bull market in history. Without systemic pension reform, the state legislature will likely continue making very little progress in honoring its commitment to public educators.

The slight bumps and dips in unfunded liabilities reported by TRSL in any given year should be viewed within the context of the “new normal” investment environment and prompt the question: What happens to TRSL in the next recession? The answer to that question should give all Louisianans pause because the system is ill-equipped to handle a downturn in the economy or stock market. As TRSL continues its reach for riskier and higher investment gains, the more exposed to market losses the plan becomes. Only by continuing to lower its assumed rate of return and adopting more conservative assumptions across the board can TRSL protect Louisiana educators and taxpayers from global market volatility and set itself back on course to long-term solvency.