As we highlighted in our July 2016 newsletter, a recent Rockefeller Institute simulation project has found that while common funding policies and practices of public sector retirement systems are effective at reducing year-to-year contribution rate volatility, there is a troublesome flip side to the equation: common funding policies are also increasing the likelihood of severe long-term underfunding. This report has been receiving increasing attention and it is worth discussing the findings in more detail.

The Rockefeller study, conducted by Donald J. Boyd and Yimeng Yin, found that by implementing funding policies designed to produce low year-to-year contribution volatility—such as 30-year, level-percent, “open” amortization methods—plan sponsors can generally enjoy lower initial payments. This can be quite attractive to governments that sponsor public pension plans, as the lower initial payments allow them to keep taxes lower or services higher in the early years after investment shortfalls. However, as could be inferred, low initial payments come at the expense of greater contribution payments later, as well as greater tax and service trade-offs in the following years.

The stochastic model used in the study simulates possible future outcomes of a standard 75% funded pension plan and calculates annual finances by running many sets of investment returns assuming a 7.5% compound average return and 12% standard deviation.[1]

All in all, the simulation results indicate that these funding policies are unlikely to bring underfunded plans to fully funded status within the first 30 years, even if investment-return assumptions are met every single year and employers make their full actuarially determined contributions. For example, the same pension plan that uses a common policy of 30-year, level-percent, open amortization method, was found to reach only 85% funded status after 30 years, even if it earned its assumed 7.5% return every single year.

The down side of the open amortization method, as well as inappropriately high discount rate assumptions, is that plans and their sponsors could expose themselves to substantial risk of potential crises.[2] This comes from the fact that in the current low-interest-rate and low-inflation environment, many pension plans are now taking on additional risk of significant investment shortfalls as a way of raising their chances of achieving overly optimistic return assumptions. This means that investment earnings will be particularly volatile, and funding policy takes on greater importance. The same plan was found to face approximately 17% chance of falling below the 40% funded status within the 30-year period if its investment return assumption is correct on average, but has a 12% standard deviation.

Furthermore, the authors point out that if sponsors do not pay full actuarial contributions, or if reasonable expected returns are less than 7.5%, the risk of severe underfunding goes up.

Unfortunately, this is not just a theoretical, academic issue, as the South Carolina Retirement System (SCRS) knows well. SCRS currently uses a 30-year open amortization schedule. Since 2004, amortization payments towards the growing SCRS unfunded liability have always been less than the interest on that pension debt, shown in the below figure. 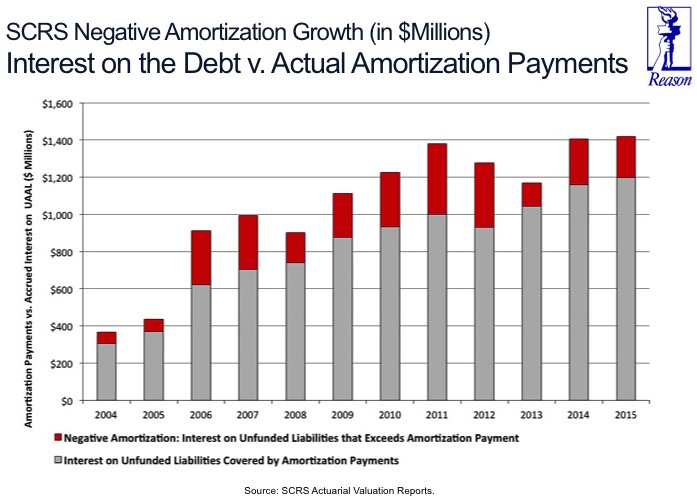 As would be intuitively suggested by the Rockefeller study, SCRS has seen its unfunded liabilities grown from around $4 billion in 2004 to $19 billion in 2015. The funded ratio has fallen from north of 80% to south of 60%.

According to the Rockefeller study, SCRS is not alone in its practice. Out of 138 state plans reviewed in the study, nearly 40% used open amortization method. Here are some other key findings from the study:

All of this raises important policy and budgetary questions for legislators about the effect that pension contributions and various funding policies will have on state and local government taxes and spending in both the near-term and the long-term. For plans that are engaged in the problematic funding policies, the likely solution will mean ending those practices and thus increasing contributions. But given that every government has to consider a wide range of policy concerns, it may not be feasible to change a bad funding policy in the near term. With bad pension funding policy at place there is no easy way out and, as in many cases in public policy, every option has its trade-offs.

[3] Study simulated ADEC with a 20% cap, where employers make up to 80% of the actuarially determined contribution each year.