Economist Art Laffer recently released a report analyzing three pieces of proposed antitrust legislation making their way through Congress. The study, published by the Committee to Unleash Prosperity, which is led by Laffer, Steve Forbes, and former Donald Trump advisor Stephen Moore, argues that these proposed bills falsely assume a state of entrenched market power in technology while ignoring consumer gains in the form of lower prices and better products.

First, the paper by Art Laffer and John Barrington Burke suggests that monopoly claims against firms like Amazon, Google, Facebook, Netflix, Apple, Amazon, and more could be overblown as measured by the level of firm concentration in the economy. The two measurements it cites to assess concentration are the Herfindahl–Hirschman Index (HHI) and the concentration ratio of the top four firms (CR4).

The HHI and CR4 aren’t just theoretical concepts of market competition analysis—the Department of Justice has employed both to investigate the impacts of merger applications. Both measures do have major flaws. Concentration is not the same as monopoly power. The HHI typically measures general concentration among all firms while the CR4 measures the sales of the top four firms as a percentage of total sales in the industry. HHI shows how competitive an industry is overall, while the CR4 shows how much of an industry’s output the top four firms are responsible for.

Between 2002 and 2017, a period of major growth for technology firms, the concentration ratio of the top four firms meaningfully shifted among tech firms. Using the North American Industry Classification System (NAICS) business code system, the concentration ratio of the top four firms in the category of software publishers and data processing, hosting, and related services decreased from 39.5% in 2002 to 35.4% in 2017. Meanwhile, other business categories, like the consumer lending industry, for example, had their CR4 go from 60% to 50% over the same time period. Thus, the consumer lending CR4 was still nearly 15% more concentrated than the information technology C4.

U.S. Census data shows that the HHI for information technology is far below monopoly concerns and also in line with most other industries. An HHI score of around 1,500 is generally considered to represent a monopoly.  As of 2017, the latest available Census data for this report, the information technology industry had an HHI score of 239. This indicates that while tech may be more concentrated than other industries, it is far from being a market share monopoly as measured by either the CR4 or HHI.

The most valid criticism of the study is that the NAICS code system used to track industry concentration and sales is flawed and does not capture actual market dynamics. For example, there is no NAICS code for search engines that accurately captures the shape of the market. Critics argue that if NAICS was more detailed then the data would reveal that the industry is more concentrated than the current data suggest. The two categories the study cites as being less concentrated, software publishers and data processors, contain firms like Salesforce, popular video game makers Electronic Arts, and Activision, and less known companies like Perspecta. Critics argue that the real monopolists are in other data categories such as internet publishing, information services, e-commerce, and other categories not broken out in the Laffer analysis, which hides their true market dominance.

However, another study that used a proprietary method to stitch together NAICS data from 2002-2017 found that even other NAICS categories which contain electronic shopping, search, music publishing, taxi services, and video distribution have only seen slight increases in concentration and are still below many other industries.

A monopoly cannot be judged by market share alone. The Laffer paper emphasizes that U.S. antitrust is judged by the consumer welfare standard, meaning that antitrust hinges on whether prices can be increased or product quality can be decreased without competition. This has not been the case in the market for digital advertising and search. The price of digital advertising has fallen by almost 30% since 2009 while online search engines have remained free. If digital advertising customers really had nowhere else to go, Google would likely be raising prices on digital advertising but that is not what the data show. In 2009, a typical digital ad would have cost $100 but in 2021 that same ad would only cost $75. This means that it costs less for most companies to connect with customers in a more efficient or cost-effective way due, in part, to improvements in services that Google has invested in.

If Google truly had monopoly status and felt no pressure from the competition, we would expect to see them invest less in research and products, raise prices, and allow their products’ quality to decrease without consequence. In terms of search, Google has maintained its market share by continually improving the product while keeping the price charged to search engine users at zero, not by using any coercive power to block out competition.

Google has recently faced criticism and pressure for tracking user data. They have also seen competition from firms like DuckDuckGo, which promise not to track users’ data. With a fraction of Google’s money, approximately $172 million in investment, DuckDuckGo has achieved a 2.5% of search engine market share.

The Laffer paper goes on to invoke both Moore’s law, which says that transistor capacity should cost half as much to produce every two years, and Wright’s law, which says that for every cumulative doubling of units produced, the cost to produce is reduced by about 15%. Both of these phenomena contribute to tech companies being able to produce better machine learning models and algorithms at lower and lower costs.

Faster computer chips can process more data at one time while smarter machine learning models can make the data more intelligible and profitable. Laffer explains how artificial intelligence has improved business processes, “AI can also go beyond traditional A/B testing to make predictions about how creative will perform…by using historical data to determine what kind of colors and messaging will connect with consumers and drive sales.”

These techniques have improved digital advertising effectiveness and also improve customer experience through better personalization and more relevant ads.  Laffer argues that this happened because internet businesses need less real estate or physical goods than traditional businesses and therefore can invest more into software applications like machine learning which continually improve efficiency at a lower cost of operation. While this has produced historically valuable companies, Laffer emphasizes that this is because they have brought equivalent value to their customers and partners.

The paper concludes by analyzing the rise of Amazon’s Marketplace seller fees through the framework of the Laffer Curve. The Laffer Curve theory states that there is an optimal tax rate that will produce the most revenue for the government. If the rate is set at 0%, the government did not recover as many funds as it could have. But as the rate approaches 100%, at some point it will go beyond equilibrium and discourage economic activity by making business unprofitable, ultimately reducing government revenues.

The antitrust bills in Congress claim that Amazon is leveraging monopoly power to increase marketplace seller fees to unreasonable rates. By applying the Laffer Curve theory, Laffer and Burke argue that if fees were too high we would see sellers jumping to other, more profitable options such as Shopify, Etsy, eBay, and others.  As a result, they claim, we should see Amazon’s revenue decrease because it would be “overtaxing” its economic participants. However, the study finds that this is not the case; as Amazon marketplace revenues have steadily increased over the last decade, marketplace sellers have increased, and total sales have increased, demonstrating that participants still find value despite the increased marketplace fee rate.

In other words, the price of selling on Amazon was likely too low and Amazon is slowly discovering the true value of its service, steadily increasing it until it finds resistance and loses revenue. If Amazon continues to increase the rate, at some point sellers will find another way to sell those goods and we should see Amazon’s revenues decrease. 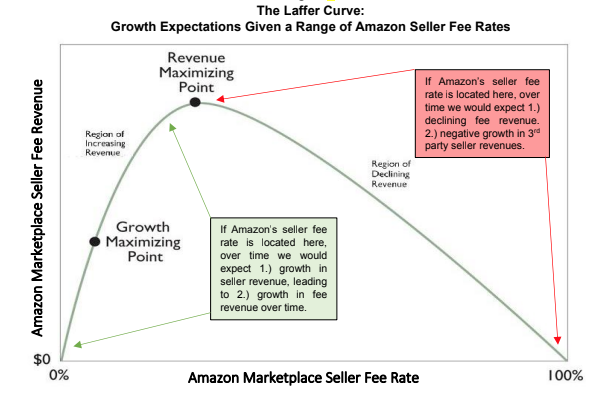 Contrary to the narratives used to argue against big tech companies like Google and Amazon in proposed antitrust legislation, the Laffer-Burke paper argues that these companies are the largest and most profitable companies we have ever seen, in large part, because they have innovated ways to deliver high-value products at relatively low costs by leveraging advances in digital technology.

The size of these companies alone should not automatically subject them to antitrust claims. Lawmakers should consider the benefits that businesses and consumers enjoy as well as the ongoing competition in the technology industry. Antitrust law should be reserved for cases where clear monopoly status can be shown to harm consumers in the form of higher prices and lower quality products.