This is the second update on pension fund investment in real estate.

The inherently illiquid, but evolving, real estate market is increasingly taking up space on the shelves of pension fund investment managers who want to diversify their portfolios in the continued chase for greater returns. In the quest for yields that could match the unrealistically high assumed rates of return, public plans are looking to real estate as a component of alternative investing. Specifically, state and local pension plans have boosted their real estate portfolio allocations from an average of less than 3.0% in 2001 to 8.2% in 2016.

This is but one aspect touched on in the new Emerging Trends in Real Estate report by PricewaterhouseCoopers (PwC) and the Urban Land Institute (ULI), which provides an informative peak into the positive and negative real estate trends of 2017. A wide range of industry experts that were interviewed and surveyed in the report anticipate “good” business prospects in the United States for real estate equity investors this year. The economy shows no signs of overheating either, report says.

The shift to so-called alternative investments, which include real estate and private equity, was in no small part accelerated by the 2007-08 financial crisis. But “beta” (i.e. less risky) investors, such as public pension plans, with long-term investment horizons and long-term pension liabilities can be naturally driven towards the real estate market.

Take for example the Public Employees’ Retirement Fund (PERF) of CalPERS — the largest state plan in the country. Last year PERF dedicated as much as 10.3% of its $302 billion assets to “real asset” investments (i.e. real estate, forestland, and infrastructure), as shown in the nearby figure. 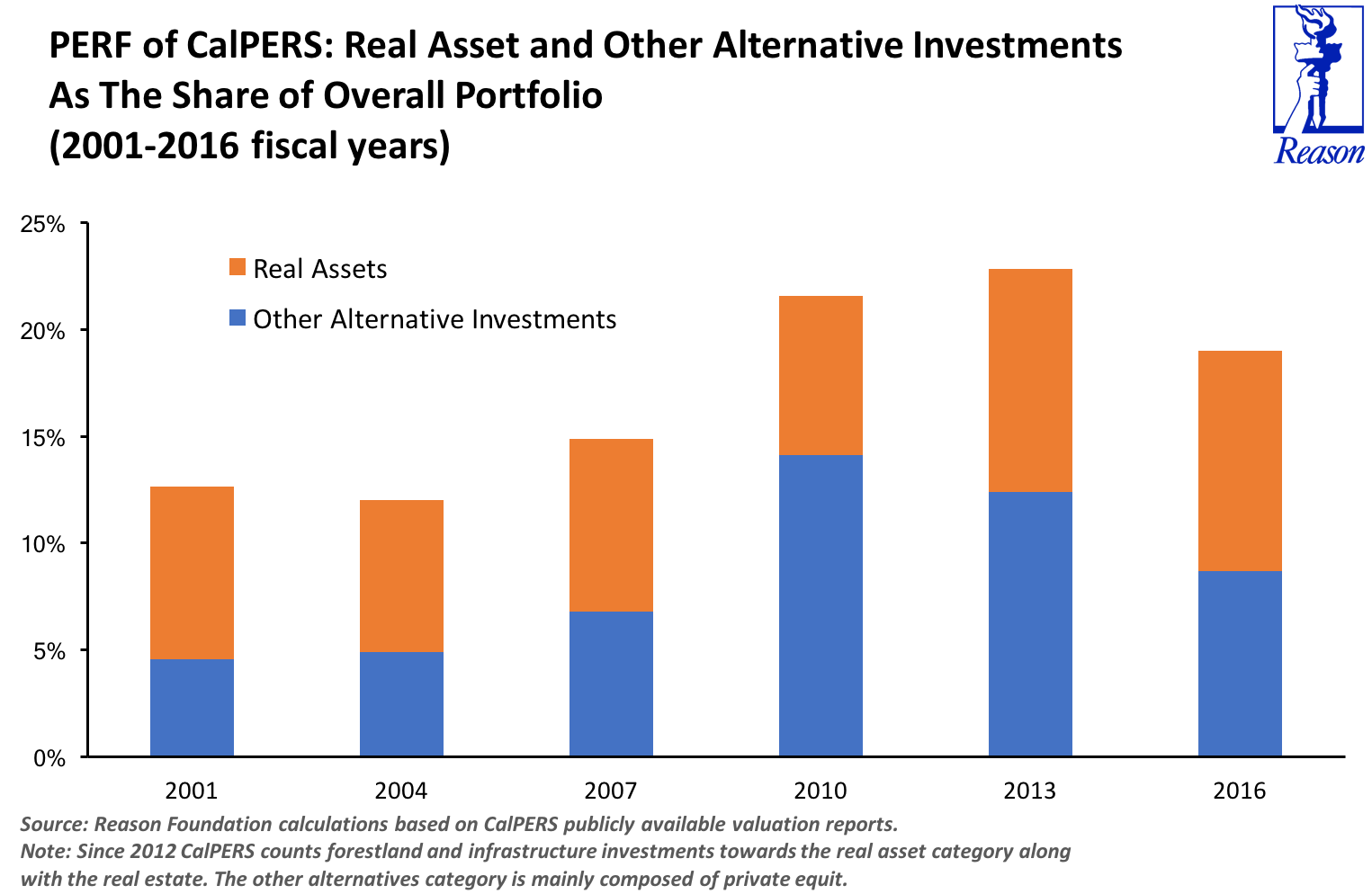 The CalPERS pension plan expects its real assets to earn 7% (including 2.5% inflation) in the next decade; plan’s new asset allocation strategy portends 5.8% portfolio returns. And that expected return isn’t likely to rise in the near-term. The CalPERS has said it plans to increase its real asset holdings, and continue cutting down on other alternatives to ‘de-risk’ its portfolio.

It is argued that the shift to more real assets may be a positive step towards maintaining returns and reduce year-to-year fluctuations. In fact, real assets can help funds diversify portfolio risks as their performance is only moderately correlated to other instruments, such as stocks and bonds. In addition, real estate yields are generally higher than bonds and lower than stocks. For example, NCREIF Property Index (NPI) that tracks core real estate returned 7.27% in the year ending Q1 2017, which is on par with S&P 500.

Yet real estate is not impervious to the overall trends on financial markets. According to the investment managers interviewed in this report, lower levels of return are the “new normal” for the U.S. real state going forward, as much as it is for virtually every other instrument. Adding to that more sour note, financial regulations and risk rules (e.g. the recently enacted Dodd-Frank Credit Risk Retention Rule) are among the main obstructions on the way to financing new construction projects, PwC/ULI report says.

Specialists have also highlighted other issues, such as uncertain job and income growth prospects, macroeconomic issues, such as low inflation rate, and high land costs. This, collectively, can be bringing the real estate prices up.

It is worth emphasizing, though, that as government pension plans contemplate the pros and cons of more sophisticated investment strategies, they need to match these strategies with the risk tolerance of inter-generational taxpayers, who eventually bear the liabilities of public pension underfunding. Fund managers should not simply embrace lower yields if their plans’ assumed returns remain high; but at the same time the search for yield must take into account what an appropriate degree of taxpayer risk is for any given jurisdiction.

For more on real estate investment see our previous coverage: