The City of Phoenix Employee Retirement System (COPERS) estimated in its most recent valuation that it is just 56.6% funded. That translates to $1.5 billion in pension debt, known as unfunded liabilities. While that is a big problem, the reality is that COPERS likely is underestimating the depth of their debt.

Last week we published an analysis of COPERS and a proposed change the status quo. In that policy brief I wrote a challenge with COPERS current actuarial accounting is that they are using an unrealistically high estimate for what their $1.9 billion in assets will earn over the next 25 years-7.5%. If the actual return on COPERS’s assets is lower than 7.5%, there will be a further mismatch between assets on hand and promised pension benefits (i.e. liabilities).

Consider how missing investment targets by a small amount can mean big costs for taxpayers: if the actual return on COPERS’s assets over the next 25 years is instead just a quarter percentage point lower at 7.25%, then taxpayers will have to pay nearly $100 million more in normal cost than is currently anticipated. And that is just if the assumption is off by a small amount. Figure 1, which was produced for a recently published analysis of the proposed Phoenix Pension Reform Act, shows the range of additional costs Phoenix taxpayers will bear if the average actual return is lower than the currently expected rate. 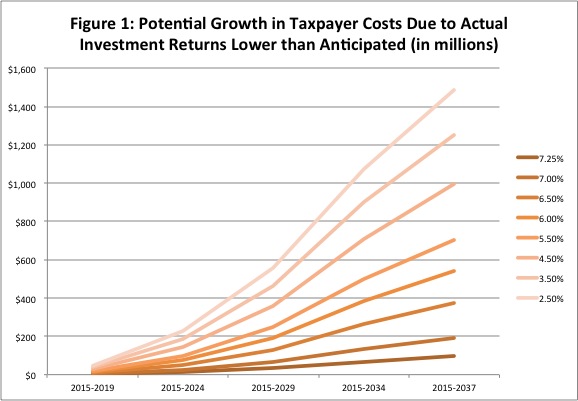 At this point, we can be fairly confident the return on investments is going to be lower. The financial crisis vividly demonstrated the investment risks that defined-benefit pension systems like COPERS perennially face. And in the post-financial crisis context, investment returns are shaping up to be a much different landscape than prior to the housing bubble and subsequent crisis.

Most pension systems across the country use similar rates of return (typically somewhere between 6.5% and 8.5%), but Moody’s Investor Service recently proposed 5.5% as a responsible return assumption. As the figure above shows, under this scenario Phoenix taxpayers will be paying $702 million in added costs over the next 25 years.

Stanford economist Joshua Rauh and Northwestern economist Robert Novy-Marx have suggested the most honest and realistic assumption might be closer to a 3% rate of return, which would put additional taxpayer costs around the $1.4 billion mark.

Because the future of institutional investing is murky it may be unfair to taxpayers to immediately switch to a 3% assumed rate of return for COPERS. However, it would be irresponsible to keep assuming the 7.5% rate and wait for taxpayers to make up the difference down the road.

COPERS might be best off shifting to a 5.5% assumed rate of return as Moody’s suggests as a first step, and then continuing to assess whether stepping down to an even more realistic rate of return would be better. Taking this approach would mean recognizing an additional $702 million in unfunded liabilities and a higher debt amortization payment today. However, the trade off would be paying less for pension debt on net over time because whether or not the $702 million is recognized now, city taxpayers will likely have to end up paying that much anyway as investment returns underwhelm down the line. The worst case scenario is that investment returns are better than expected and Phoenix pays down its currently recognized $1.5 billion in debt faster.

To see our full analysis of challenges facing COPERS and whether the proposed Phoenix Pension Reform Act would solve those problems, see our full study.