Human beings are imperfect; and the technology we create is also often flawed. This fact may surprise some people who think that engineers are able to create perfectly safe technologies, especially if given appropriate guidance from Congress, the US Department of Transportation, or some expert board.  But no one can predict the future or foresee all potential scenarios. Thankfully, the House’s SELF DRIVE Act limits its prescriptive guidance allowing automakers to test, to correct errors, and to ultimately build more accurate AVs.

One of the biggest potential benefits of AVs is reduced vehicle fatalities. In 2016, roughly 40,000 people died in motor-vehicle incidents. This was a 6 percent increase over fatalities occurring in 2015, and a 14 percent increase in traffic deaths in 2014.  This is the biggest two-year increase in 50 years (from 1966 to 2016). However, over the same 50-year period, those deaths due to motor-vehicle incidents have dropped remarkably for the number of miles travelled per year in the US. 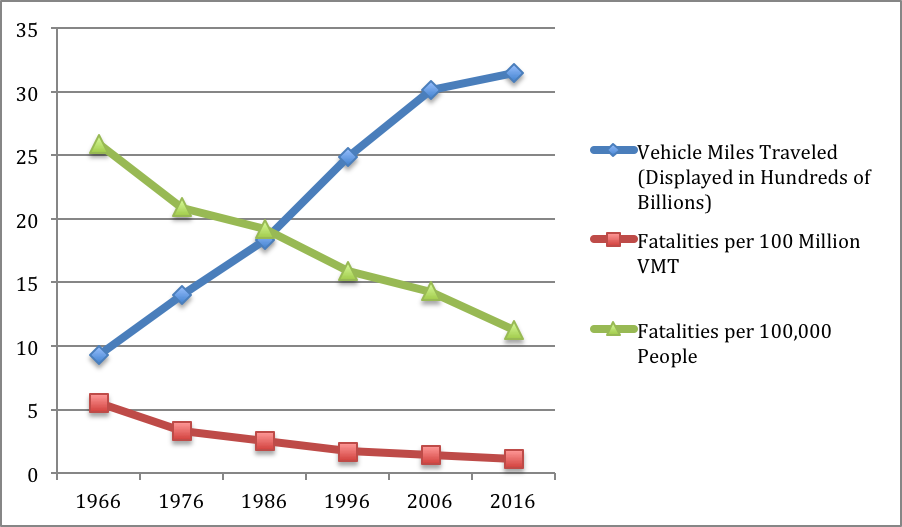 Between 1966 to 2016 VMT increased in the U.S. by 240 percent. Motor vehicle fatalities declined 79.2 percent per 100 million VMT (56.2 percent in fatalities per 100,000 people).  Though motor vehicle fatalities have declined significantly over the last five decades, 40,000 automobile deaths a year is still a tragically high figure, especially for the family and friends of each of those who died.

Developing automated-vehicle (AV) technology comes with a price in both cost of development and in lives lost. And because not all scenarios can be foreseen in a laboratory or in testing, this means that the only way to get the needed data to improve AV technology is real world testing and use. The alternative of imposing regulations on AVs that significantly delay or derail the growth of AV technology will lead to even more loss of life. While not perfect, the SELF DRIVE act is a useful law that will prevent unnecessary regulatory overreach once AV challenges do arise.