There’s an old joke about banks making loans: when you have money and don’t need it, banks are eager to lend, but when you don’t have money and need it, they’re nowhere to be found. If only lenders were as reserved when purchasing pension obligation bonds (POBs) from state and local governments that play with fire by borrowing to cover the costs of their pension systems.

Pension systems that find themselves in a fiscal hole generally have four options to increase their assets on hand: increase contribution rates, make a lump sum payment into the fund, invest in higher-yielding assets and hope the return matches expectations, or issue POBs and add those funds to the plan’s portfolio.

The first option, though it would constitute a meaningful improvement to plan solvency if done properly, is usually unattractive to policymakers. Near-term focused legislators or governors often want to avoid the political downside of increased contributions —increasing employer contributions means less money to spend on current public services.

Most states typically don’t have the revenue for the second option, since year-to-year budgets tend to be tight and the resources scarce for lump sum payments in to plans.

The more common approach for plans is to chase higher returns by investing in assets with higher potential yields — but also with more risk. A survey of public-sector pension systems conducted by Pensions & Investments found that in 2012 states allocated about 27% of assets to fixed-income instruments (generally considered the safest asset class), 52% to equities (riskier, but relatively safe), and nearly 20% to “alternatives” between 2008 and 2011. Compare this to 50% invested in fixed-income, 38% in bonds, and only 5% in alternatives between 1984 and 1994. 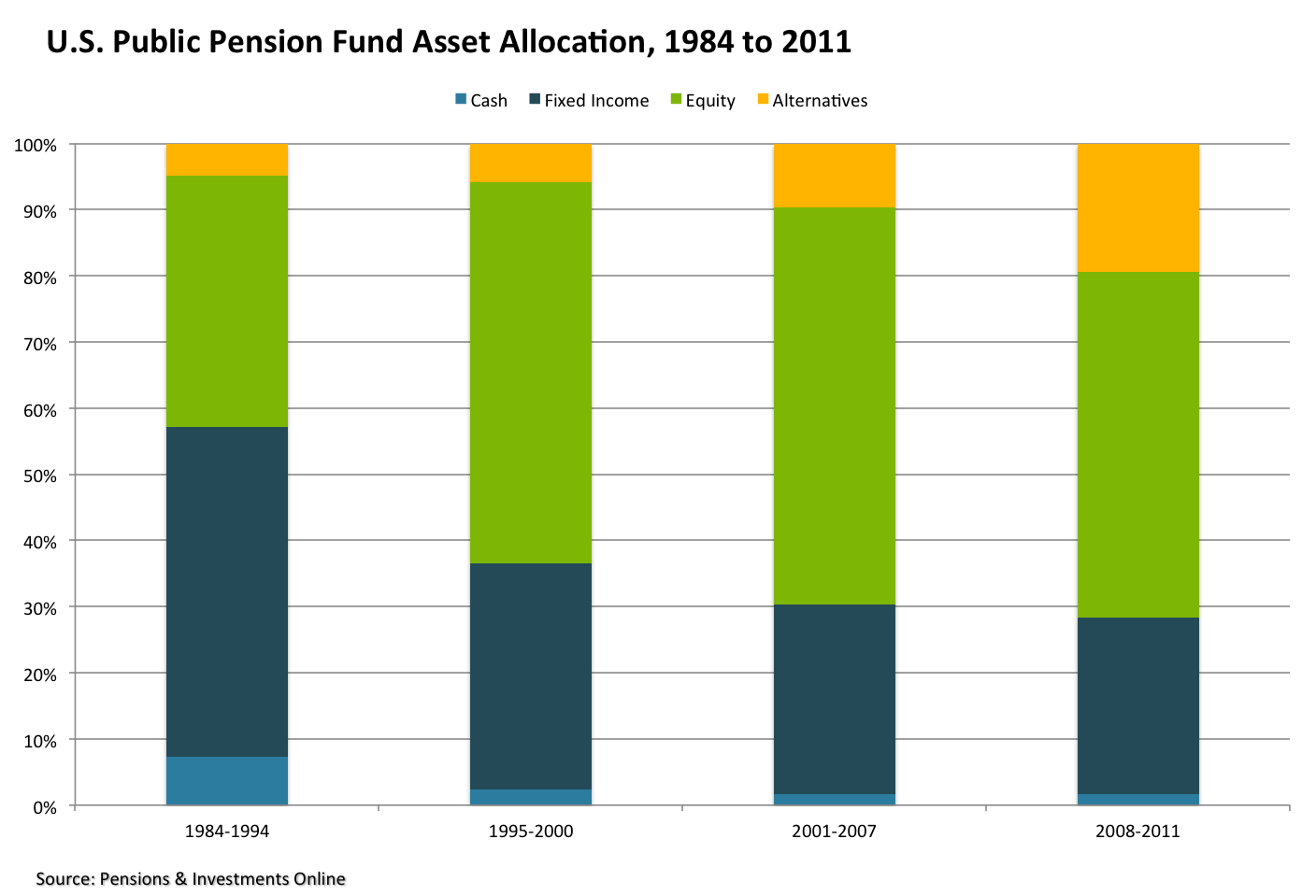 But this is no free lunch. Higher expected returns means increased risk, as many pension funds have found out the hard way.

And that brings us to pension obligation bonds. These are bonds issued by a state, county, or municipal government specifically to finance its pension system. Oakland, California issued the first POB in 1985, trying to leverage borrowed money and make higher returns than otherwise possible using contributions alone. Higher investment returns means reduced future contributions. This is referred to as “actuarial arbitrage.”

In finance, arbitrage is simply making a trade in one part of the market with the intention of making some simultaneous trade in another part of the market in order to take advantage of special knowledge held by the investor. In the case of POBs, the debt-issuing government is implying it can do more with the money it collects from the private sector than the investors handing over the money could do with it.

Why should anyone be worried about this common practice from the private sector being used by the public sector?

When comparing private and public sector operations, what’s good for the goose is not good for the gander. Though POBs are uncommon across the country (only 0.2% of governments issued POBs according to the Center for Retirement Research at Boston College) for those that have tried the practice, it has not worked out well. CRR calculated the internal rate of return (IRR) for POBs issued over various time intervals, and the results tracked the general performance of the market, as one would expect. The average IRR from 1992 to 2007 was 0.8%, from 1992 to 2009 was negative 2.6%, and from 1992 to 2014 was about 1.5%.

This tells us that the success of POBs largely depends on the market. This does not bode well for issuers, as future returns will likely be much lower than in the recent past.

The Government Finance Officers Association has come out against states and municipalities issuing POBs because the risk associated with POBs is higher than that of private debt. In practice, there is a very real possibility that public sector investments will turn into a net loss for the POB issuer, and this has to be weighed carefully when future taxpayer money is on the line.

To date, most of the POBs issued have not matured, so more data are needed to fully determine the efficacy of current investments. Connecticut’s Teachers Retirement System issued a $2 billion POB in 2008 that matures in 2032. The Center for Retirement Research found that, to date, this POB has returned negative 0.3% per year.

But none of this has stopped states from considering POBs. The boards of the Oregon Public Employees Retirement System (OPERS) and Oregon Investment Council (OIC) recently announced they were considering a POB to deal with the State’s $22 billion unfunded liability. Similarly, Alaska’s governor announced his intention to issue $3.3 billion in POBs, until being rebuffed by legislative leadership. The State risked a credit downgrade if it proceeded with the POB.

Both Oregon and Alaska face large unfunded liabilities due to previous poor investment returns and funding policies. And this follows a trend where states that consider or issue POBs tend to have very poorly funded pension systems. As CRR’s report concluded, “governments are more likely to issue POBs if the plan represents a substantial obligation to the government, they have substantial debt outstanding, and they are short of cash…financial pressures play a major role.”

Even if it were possible to use POBs responsibly, the data show otherwise. POBs are not a tool used by prudent pension funds to increase returns. Rather, they are straws that struggling funds grasp at when they’re already underwater.