In a  recent hearing held in the New Mexico Capitol, actuaries and financial experts urged a new task force to brace for any future outcomes that could damage the health of the state’s pension plans for public employees and educators, which are 71.1 percent and 52.2 percent funded, respectively The hearing highlighted a few pension funding concerns and explored policy proposals that could alter some of the future pension costs for public employees and taxpayers alike.

The core discussion revolved around the “what if scenario” — the possible degradation of the state pension plans’ financial health if investment returns underperform relative to assumptions. For example, the New Mexico Public Employees Retirement Association (PERA) expects, on average, to earn 7.25 percent in long-term investment returns. Though this arguably falls in line with nationwide median assumptions, legislators in the state have plenty of reasons to be skeptical. For example, PERA averaged out to just 5.5 percent and 6.5 percent returns over the past 10 and 20 years, respectively (see Figure 1 below). 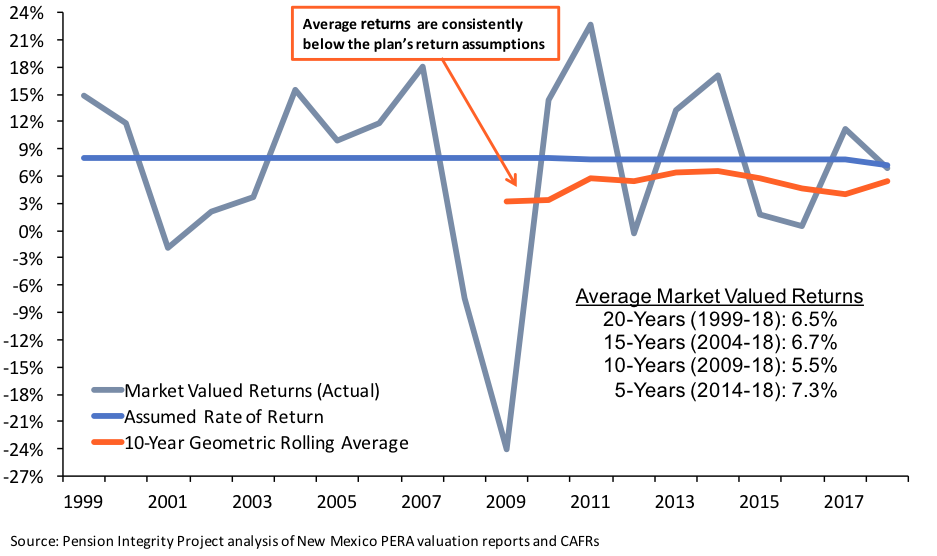 Take it from one of the plan managers — Dominic Garcia, chief investment officer of PERA and a member of the task force, says the current 7.25 percent return assumption is a “rosy scenario.” He added, “We need this system to be resilient to bad outcomes.”

New Mexico is of course not alone on this. As the Pension Integrity Project at Reason Foundation has highlighted before, many state and local pension plans’ long-term return expectations are misaligned relative to both their own historical performances and short to medium term return projections.

That is not to say that these are impossible targets, they just appear to be hard to hit over the foreseeable future. Furthermore, as actuaries highlighted, if PERA somehow ultimately averages out to 7.25 percent over the long-term, the plan’s risky asset allocations should also put state legislators on the lookout for a volatile range of possible year-to-year investment returns, along with higher chances of significant losses and downside risks.

In the public pension realm, investment underperformance matters a lot, as it directly fuels the growth of both unfunded pension liabilities and pension contribution requirements. Under a package of reforms signed by New Mexico Gov. Michelle Lujan Grisham (D) earlier this year, employer contributions to the state’s two major pension funds: PERA and Education Retirement Board (ERB), will be lifted by 0.25 percent starting July 1.

However, as we explained in a previous commentary, Moody’s Investor Services decided not to improve the state credit rating in response to the change because the reform came short of tackling the ERB’s unfunded pension liability. To do so, it would likely require even more increases in contributions, along with additional changes to problematic actuarial assumptions, statutory contribution policy, and recurring costs that are still jeopardizing pension solvency. As highlighted during the discussion, one option to curb costs could be moving away from guaranteed annual cost-of-living adjustments (COLAs) for retirees and making these benefits contingent on investment performance, or some other benchmark (e.g. regional inflation rate) instead.

This makes sense, as the guaranteed COLAs often amount to a considerable portion of the overall pension costs for the public and are reportedly easier to amend under state law than core benefit formulas and the like. COLA amendments were also among the most popular changes for state and local public pension plans between 2009 and 2014.

An alternative or additional option not involving current or retired members would be establishing a new plan design for new hires on a prospective basis. This might be a risk-adjusted defined benefit plan with an option to select a defined contribution plan (a debt-free design), a hybrid of the two, cash balance plan, or some other retirement plan design that would add choice and portability while reducing financial liability risks and stabilizing future pension contributions.

New Mexico’s policymakers will have several more chances to discuss the state’s $18.1 billion in unfunded liabilities across both PERA and ERB, which is a significant level of pension debt to hold for a state with New Mexico’s population and budget. Tackling public pension woes sooner than later will make a difference. It will ensure New Mexico continues fulfilling its promises to police officers, teachers, and other public employees while keeping costs for the taxpayer at bay.