The tragedy unfolding in America’s nursing homes highlights the need to address long-standing failures in the industry. In a new policy study published by the James Madison Institute, Protecting Florida’s Most Vulnerable: Market Based Reform for Improving Nursing Home Care, I offer recommendations to address these problems.

Between state and federal requirements, nursing home care is among the most highly regulated industries in the United States, but quality issues remain rampant. Considering the vulnerability of nursing home residents and the potential for neglect and abuse, some degree of regulation and oversight is necessary and appropriate. However, policymakers must acknowledge the limitations and tradeoffs associated with regulation.

For example, state-level certificate of need (CON) laws require health care providers to receive government approval in order to construct new facilities, expand existing ones, or offer new medical services. These laws were implemented under the misguided theory that restricting supply would control health care costs by preventing over-investment. However, the bulk of evidence suggests that CON laws do not achieve this goal.

States With and Without Nursing Home Certificate of Need Laws 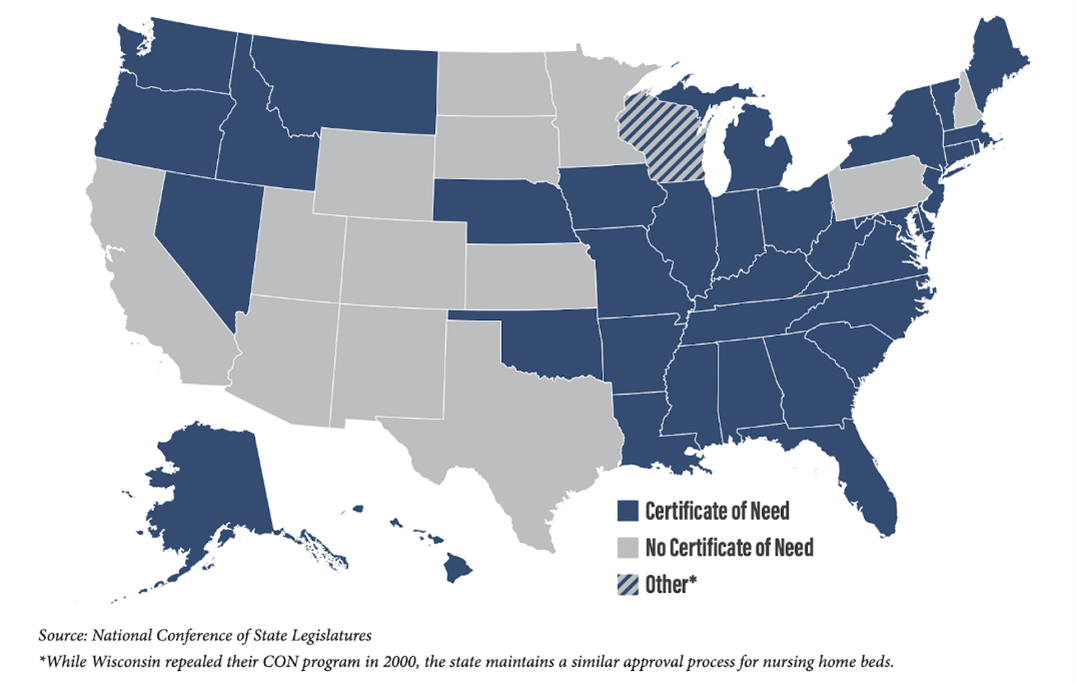 *While Wisconsin repealed its CON program in 2000, the state maintains a similar approval process for nursing home beds.

Despite overwhelming evidence that CON laws do not reduce health care costs, proponents argue that limiting the number of nursing home beds will control Medicaid costs. However, that assertion is not supported by research on the subject. A 2016 study found that while nursing home Medicaid spending per enrollee declined in all states between 1992 and 2009, the rate of decline was actually higher in states without CON laws. As the authors noted, “by 2009, compared to states without CON, Medicaid spending per enrollee on nursing home care was 1.8 times higher in states with nursing home CON.”

Proponents of nursing home CON also argue that CON requirements improve quality by ensuring high occupancy rates. They suggest that eliminating Florida’s CON program would lead to a dramatic increase in the number of nursing home facilities and beds. As a result, facility occupancy rates would decline, revenues would fall, and care providers would be unable to cover the costs required to provide quality care. Again, the available research does not support these claims.

A recent study found that certificate of need requirements and higher occupancy rates are both associated with lower quality of care. The authors used scores from the National Nursing Home Survey, which measures facility cleanliness, staffing adequacy, and satisfaction ratings from a sample of residents in each facility. After controlling for other relevant factors, the authors found that survey scores are about 18 percent to 24 percent lower in states with CON requirements. Moreover, a one-point increase in the occupancy rate was found to result in a 0.5 percent reduction in survey scores on average.

While certificate of need laws do not achieve their goals of reining in costs or improving quality, they do have significant distortionary impacts that benefit incumbent care providers to the detriment of consumers and potential competitors. For example, Florida’s CON program tends to lead to outdated, larger nursing facilities by protecting existing providers from competition and favoring expansions over the construction of new, state-of-the-art facilities.

As a result, over 30 percent of Florida’s nursing homes were built before 1981 and about 16 percent are over 50 years old.

In sum, the evidence indicates that certificate of need laws may be counterproductive to the goals of reducing costs and improving quality. They also protect incumbent care providers from competition that would otherwise create incentives to improve quality beyond the minimum standards set by regulation.

It is, therefore, reasonable to conclude that repealing certificate of need laws would encourage greater competition without increasing costs or compromising on quality.

The COVID-19 pandemic has highlighted long-standing problems in the nursing home industry. In response to the crisis, it is incumbent upon us to rely on evidence-based policy decisions and abandon the top-down approach of the past to ensure high-quality care for Florida’s, and the nation’s, growing elderly population.