The Michigan Legislature has just passed a first of its kind, innovative pension reform bill that will provide a new set of retirement choices for state teachers and cap the growth of liabilities in the state’s current, structurally flawed retirement plan. Should Gov. Rick Snyder sign the bill, the Michigan Public School Employee System (MPSERS)—currently only 60% funded with $29 billion in unfunded pension liabilities—will have its most realistic path to solvency in the past two decades.

The reform is grounded in a focus on reducing risk, while stabilizing cost, and preserving choice:

The Pension Integrity Project at Reason Foundation provided technical assistance to many stakeholders throughout the MPSERS reform process, including the bill sponsors (Sen. Phil Pavlov and Rep. Thomas Albert), legislative leadership in the House and Senate, and many individual legislators. We provided independent actuarial modeling during the process and offered advice on design concepts to the legislature, the Snyder administration, and the state’s Office of Retirement Services.

Some other plans in the country have adopted similar components as the Michigan teacher pension reform:

But no state in the country thus far has embraced the full scope of these reform components for a teacher pension system in a way that will virtually eliminate the possibility of unfunded liabilities for new hires, while also allowing future teachers a choice of retirement benefit styles (DB or DC). The structure of this blended approach should serve as a model for teacher pension reform in other states facing similar challenges as MPSERS does today.

Like many other pension systems in America, MPSERS faces a mountain of unfunded liabilities and future of growing contribution rates. At the turn of the millennium the Michigan teachers plan was reported to be fully funded, but as of the end of last year (June 2016) the plan’s funded ratio was below 60% with $29.1 billion in unfunded liabilities. 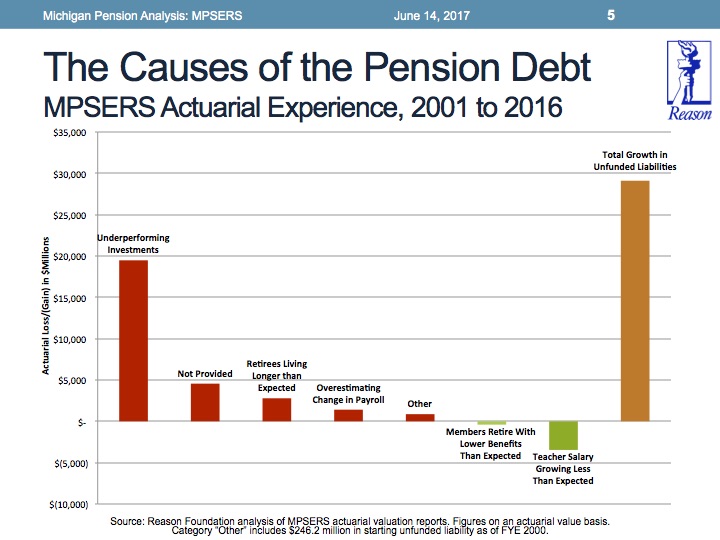 Our analysis of the MPSERS valuation reports found that two-thirds of the debt accrual came from underperforming assets over the past decade and a half. For the past few decades MPSERS has assumed an 8% rate of return on assets. However, the 20-year average return has actually been 7.2%. The 15-year average is even worse at 6.5%, while the 10-year return has been just 5.8%.

Other actuarial assumptions have created problems for MPSERS too. For example, since 2004, the Michigan Office of Retirement Services (ORS) has been assuming a 3.5% growth in payroll — but there hasn’t been a single year since then that payroll grew at that rate higher than 1.25%. In fact, over the past 15 years the payroll for the plan has actually declined by nearly $2 billion. This grossly unrealistic growth assumption — combined with a long, level-percent of payroll amortization method — has effectively back-loaded billions in unfunded liability payments, making the long-term “plan” to pay off the pension debt increasingly a fantasy.

In 2010, Michigan created a new “Pension Plus Plan” to replace its existing defined benefit plan for future hires. This new hybrid design included the same defined benefit plan — with a 1.25% multiplier, 10-year vesting schedule, and 5-year final average salary — but with a larger employee contribution, slightly changed retirement eligibility age, and no cost-of-living adjustment. Instead of a COLA, the state added a small DC Plan on the side of the DB Plan, with a 1% maximum employer match for the first 2% contributed by the employee. Most importantly, this “hybrid” plan was priced with a 7% assumed rate of return while the main DB Plan continued to use an 8% rate of return.

This change was not enough to fix MPSERS’ problems though. Even the 7% assumed return carried substantial risk. We developed a Monte Carlo analysis of the MPSERS portfolio using asset class forecasts by three leading financial firms plus the Michigan Bureau of Investment’s own forecasts and found that there was less than a 50% chance of achieving a 7% rate of return.

To make matters worse, all of the other unrealistic or inaccurate assumptions being used by MPSERS for the old plan were the same for the Pension Plus hybrid plan. As a result, employers contributed just 3.1% towards the post-2010 defined benefit plan when more realistic assumptions would have required around 7.1% employer contributions.

Meanwhile pension debt continued to accrue in the old plan with its unrealistic 8% assumed return. The adoption of the hybrid plan didn’t fix the problem, and its actuarial assumptions were tacitly underfunding new employee retirement benefits in just the same ways as the old plan.

On top of growing unfunded liabilities, MPSERS has also faced considerable retention problems. Our analysis of termination data provided by ORS found that about 50% of teachers left before vesting in any benefit, and less than a third of teachers actually stayed long enough (30 years) to earn a full pension benefit. The existing system was clearly not working for all teachers.

Using independent actuarial modeling we built for members of the Michigan legislature, our forecast shows that without changes to MPSERS and continuation of recent actuarial experience trends, actuarially required employer contributions would effectively double by the 2030s, from around 30% of payroll today to north of 60% of payroll. Such a nightmare scenario would easily risk crowding out classroom expenditures as all of Michigan education costs — including pension debt costs — come from the same pot of money in the Michigan budget called the School Aid Fund. Facing this kind of unsustainable future, the Michigan legislature knew it needed to act.

The primary objectives of pension reform in Michigan started with ensuring that all promises made to existing employees and retirees could be kept, and that any solution ensure retirement security for all current and future members. A major focus was on putting a cap on the state’s financial risk while also minimizing increases in normal cost. It was important for many stakeholders in Michigan that employees have the option for a traditional defined benefit, while other stakeholders were focused on providing a robust DC Plan that would provide portable benefits for the more mobile teachers in the state. The final agreement balanced the varying interests and goals of stakeholders from across the legislature and Governor’s office.

Funding Policy Improvements for the Existing Plan: While the primary changes of the Michigan teacher pension reform were a cap on liabilities and improved benefit design structure, there were also funding policy changes that cumulatively will result in approximately $250 million in the current year budget being appropriated to make a down payment on the existing debt above and beyond the actuarially determined contribution.

New Pension Plus 50-50 Plan Design: A key innovation in the Michigan teacher pension reform is the creation of a retirement option that combines a de-risked defined benefit pension plan with a defined contribution retirement plan.

Our Pension Integrity Project team provided technical assistance to many stakeholders in the MPSERS reform process. We provided independent actuarial modeling for members of the state House and Senate (including, most importantly, the bill sponsors), as well as policy design advice to legislative leadership, governor’s office, and the state’s Office of Retirement Services based on our experience assisting in other states. Whenever we look at a proposed pension reform package we always compare it our objectives for good pension reform. Ultimately, the MPSERS reform bill compared very favorably to our matrix:

The Michigan Legislature should be congratulated for adopting such an innovative teacher pension reform package that will reduce risk, provide choice, stabilize contribution rates, offer retirement security, and keep promises. Other states and cities should look to this design for inspiration in solving their similar pension woes.