The Nebraska legislature is currently considering a bill aimed at helping to identify systemic challenges that are driving the growth of unfunded liabilities affecting municipal pension systems across the state.

Understanding a pension plan’s stress points provides an opportunity for the pension system’s managers to implement preventive measures that either limit the impact of the discovered risks or avoid the risks entirely.

One of the most widely recognized risk factors pension plans must navigate is volatility in short- and long-term investment returns. Traditionally, reports from public pension plan consultants give long-term forecasts assuming a year-to-year outcome that exactly matches their assumed long-term investment return assumptions. But—as the last two decades would attest—expecting increasingly volatile market returns to match assumptions each year is not an accurate portrayal of the volatility of global investment markets.

Instead of only showing a scenario of what the plan’s funding would look like if it met its assumed rate of return each year, stress testing explores a range of realistic market scenarios to more comprehensively demonstrate what could happen to the pension plan’s funding over the next few decades. This allows policymakers to see not only where the system’s financial health is today, or where it is expected to be in 30 years, but how the system would be impacted in times of unforeseen economic volatility.

Nebraska’s LB 586 requires a description of each municipal pension system’s assumed rate of return and how each pension board determined that rate. This metric is important because if a public pension plan’s investment performance falls short of that rate, debt is created.  The decision-making process around this important assumption should be more transparent.

Similarly, showing the impact various market return scenarios would have on assets, liabilities, and required contributions over long periods of time, can provide a quantitative view of the appropriateness of such an important assumption.

Although some scenarios required under the proposed legislation are often described as black swan-types of events that are hard to predict, they spotlight the relationship between traditional public pension plan metrics and the resources required to sustain such systems over long periods of time. Stringent accounting and financial disclosure requirements have increased the amount of attention given to these types of assessments that explore the outcomes that can result from possible deviations from assumptions.

Colorado’s particular required risk assessment draws lines in the sand where stakeholder consensus dictates acceptable or concerning levels of risk and takes the form of simple “signal light” report. This evaluation looks at how investment returns, population growth, mortality, and other actuarial assumptions impact the system’s efforts to achieve and maintain full funding. The simplified signal light reporting system gives policymakers and stakeholders the ability to assess the likelihood that future changes to the plan will be needed.

Requiring routine stress testing of Nebraska’s public pension systems would unlock the ability to apply uniformed metrics to what is currently a real, but largely unmeasured, problem for taxpayers, retirees and local governments. This bill would allow policymakers to rely on real and concrete accounting that clearly defines the challenges facing each pension system in clear, comparable, and dispassionate metrics.

In the interest of taxpayers and the public workers depending on these pension systems, the reporting established by this bill would be a significant first step in identifying and addressing the challenges facing locally-run pension plans.

The chart below details which important measures of comprehensive public pension reform that Nebraska’s LB 586 includes. 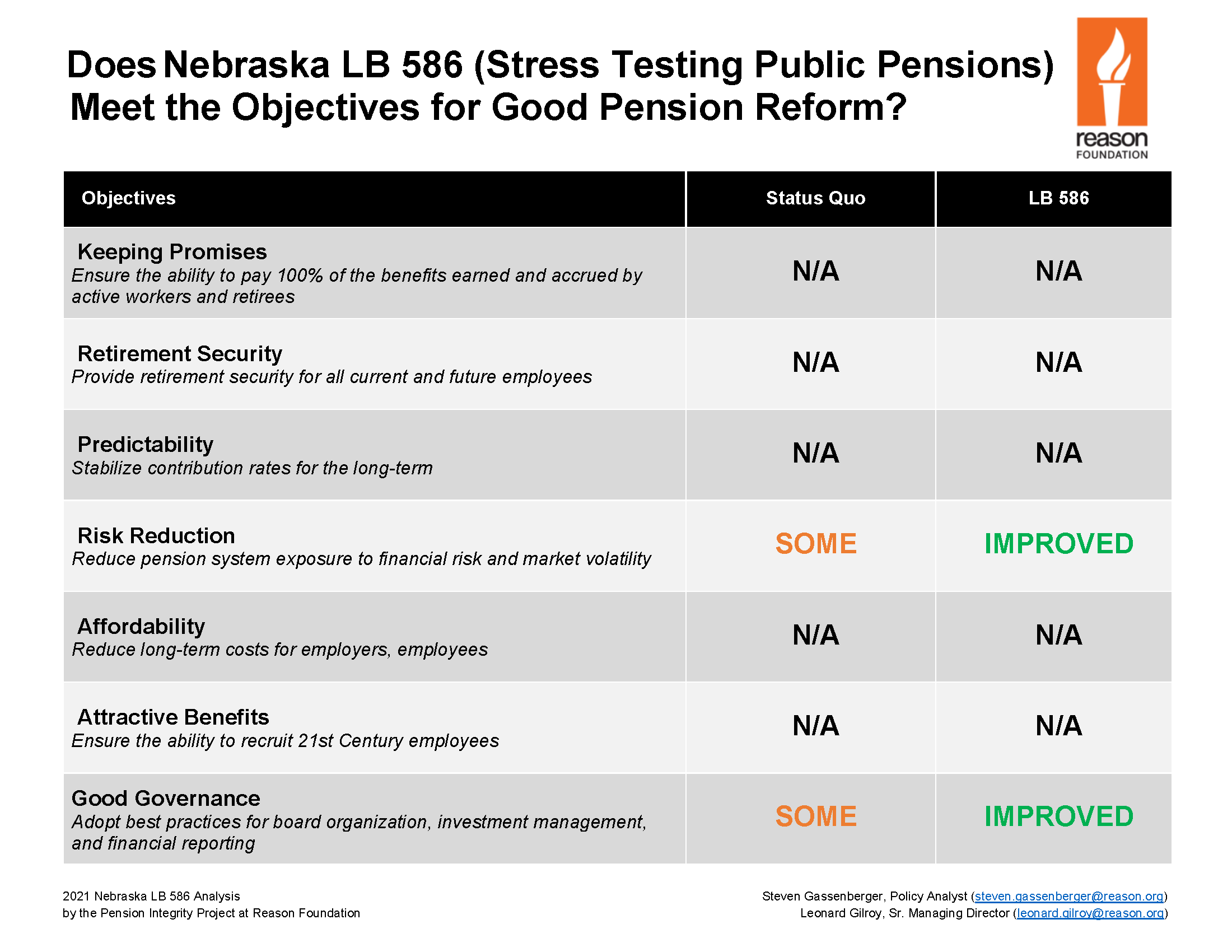 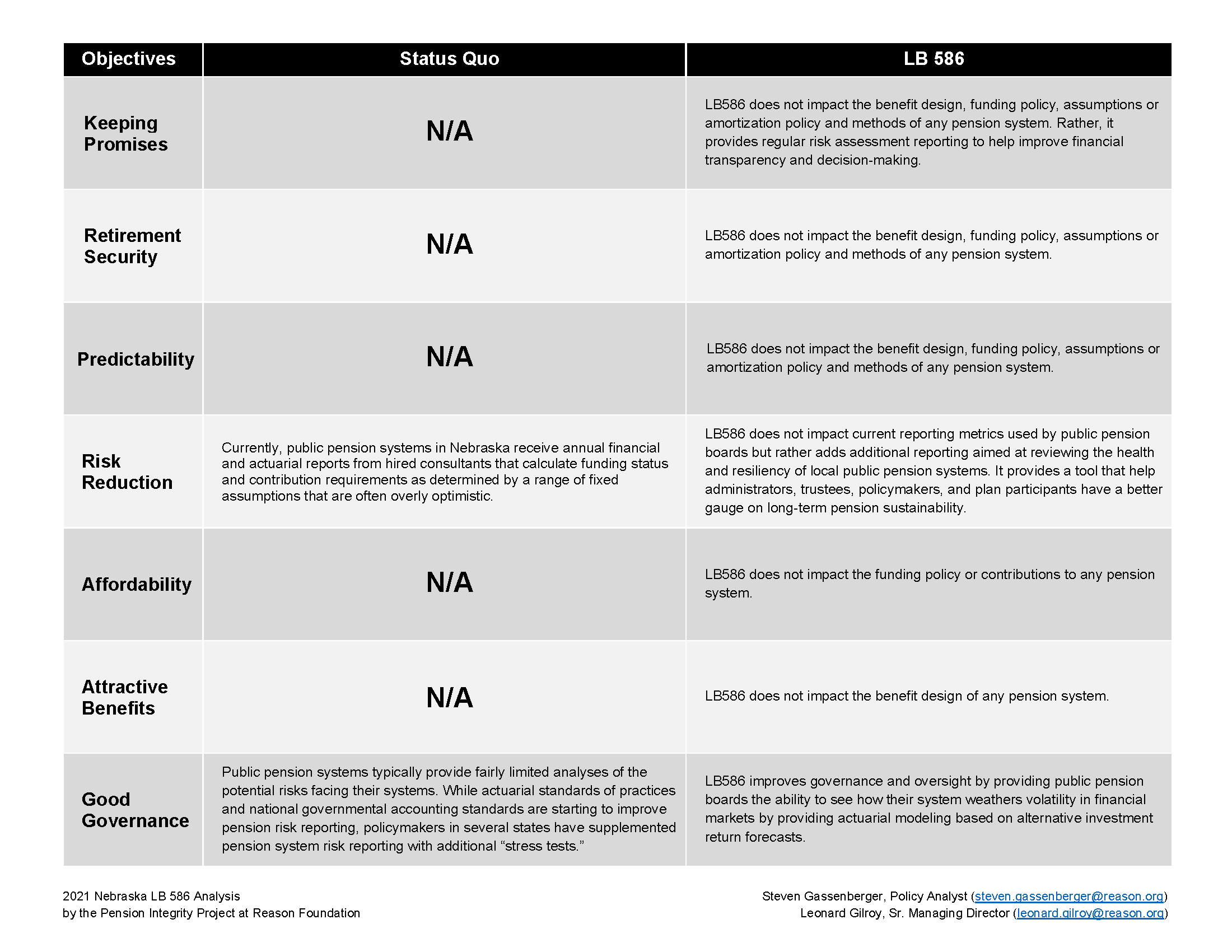