The board of the Kentucky Retirement System (KRS) has taken one of the boldest steps of any pension plan in the country towards improving its funding policy. In May, the KRS board adopted sweeping changes to the actuarial assumptions used to calculate liabilities and determine pension debt payments:

These moves made by one of the worst funded pension plans in the country stand out for their boldness in the face of just incremental changes made states like California or New Jersey. Earlier this year Connecticut dropped its rate from 8% to 6.9%, despite the fact that is only forecasted to earn around 6%. At the time that seemed like a large cut anyway and a decent step towards being realistic. Compared to Kentucky, it seems like child’s play

Simply put, Kentucky has set a new bar for adopting more conservative assumptions to get ahead of the pension crisis unfolding in many states across the U.S.

Unfortunately, some are mistakenly reporting that the change in these assumptions has “increased” the KRS total liability by $2 billion. This claim is based on a misunderstanding of pension accounting. Changing these assumptions only changes the measured value of the liability, or put differently, how much of the true liability is actually recognized on an accounting basis. In a defined benefit plan, the dollar amount to be paid out in promised benefits is fixed (though uncertain, as the compensation and lifespan of members can’t be known exactly). Thus, the liabilities are what they are; all that’s changed in this case is how Kentucky measures the present value its liabilities and how much is recognized.

Once understood in that context, the importance of conservative funding policy comes into focus. Take a plan like the New Hampshire Retirement System, where the state dutifully made 100% of the annual required contribution for almost all of the past 15 years, yet the plan is only 58% funded. This is a failure of funding policy. The state paid 100% of a bill that was miscalculated and undervalued because of a failure to meet assumptions like payroll growth, employee lifespan, and investment returns (the underperforming assumption that has contributed the most to pension underfunding).

When a plan becomes underfunded, payments are added on to the next year’s normal cost (the cost required to pre-fund benefits earned that year) in the form of amortization payments to pay down the unfunded liability. Even the best-run plans will likely need to make amortization payments at some point (especially if there is a recession).

But if a plan fails to update its old assumptions after years of underperformance due to structural features of the modern global economy, underestimating members’ lifespans because it uses outdated mortality tables, or low payroll growth due to poor retention and recruitment, pension debt will accumulate and amortization payments will grow. And unless these assumptions are revised, the amortization payments (just like the previously-calculated normal costs) will be too low because they are based on assumptions the plan likely won’t meet in the future.

Those responsible for funding policy need to know the contribution rates necessary to fully fund their plans, and it is the responsibility of the legislature to then appropriate the amount required for full funding. In states like New Jersey, Illinois, and Massachusetts, the legislature has simply neglected to make the required pension contributions in favor of funding other budget priorities.

For this reason, Kentucky policymakers will need to commit to consistent, full funding as a central driver of its fiscal policy moving forward. It is almost impossible to understate the magnitude of the policy change the Commonwealth has made and the precedent it has set for the rest of the country. But over the past two decades, the Bluegrass State has had a mixed (and more recently, poor) record of making its required pension contributions. 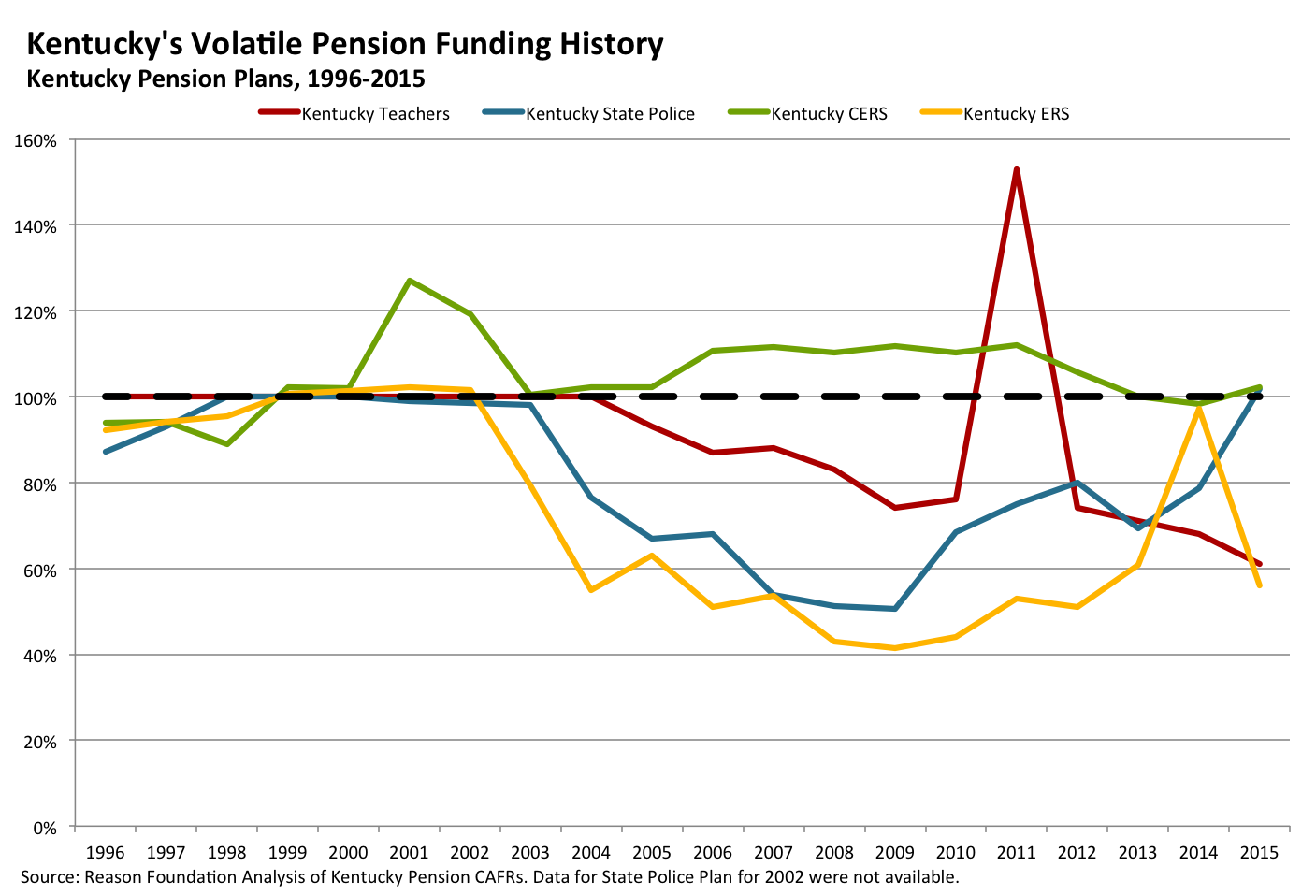 These assumption changes are estimated to increase the required annual contributions by $700 million dollars.

Given the severity of Kentucky’s pension crisis, serious debate is needed over where the state is going to find the money to make the required contributions to fund the system (and Gov. Matt Bevin deserves credit for elevating the issue in Kentucky). But at least Kentucky will now have a better idea of how much KRS really costs. And it’s better to debate where money will come from to pre-fund benefits than where the money will come from to pay promised benefits once the funds are insolvent.