Recent reports of strong investment gains for the Iowa Public Employees Retirement System (IPERS) are good news but shouldn’t be interpreted as a sure sign of future solvency. Although exceeding investment expectations in any given year improves the health of a pension plan, a single year, or even a few years of solid returns, are not enough to completely balance a retirement system that is expected to pay out benefits to retirees for decades to come. Likewise, investment returns are volatile—impressive gains in any given year can easily be offset by future loses.

To address the issue of volatility within pension investment portfolios, pension managers and actuaries employ asset smoothing. This method allows investment gains and losses to be spread out over multiple years, substantially reducing the impact of returns from a single year on overall solvency. Applying this method can help prevent wild swings in the required year-to-year contributions.

In the most recent 2017 IPERS valuation report (see page 4), the plan boasted a 7.86 percent actuarial rate of return, outperforming the assumed rate of return. This is good news. The strong investment performance resulted in a gain of $102 million, offsetting some of the losses from previous years.

However, this sort of near-term volatility should not be the basis on which Iowa stakes the retirement future of its public servants. What is essential to pension plan managers, and consequently public workers and taxpayers, is the overall health and long-term stability of the pension system. 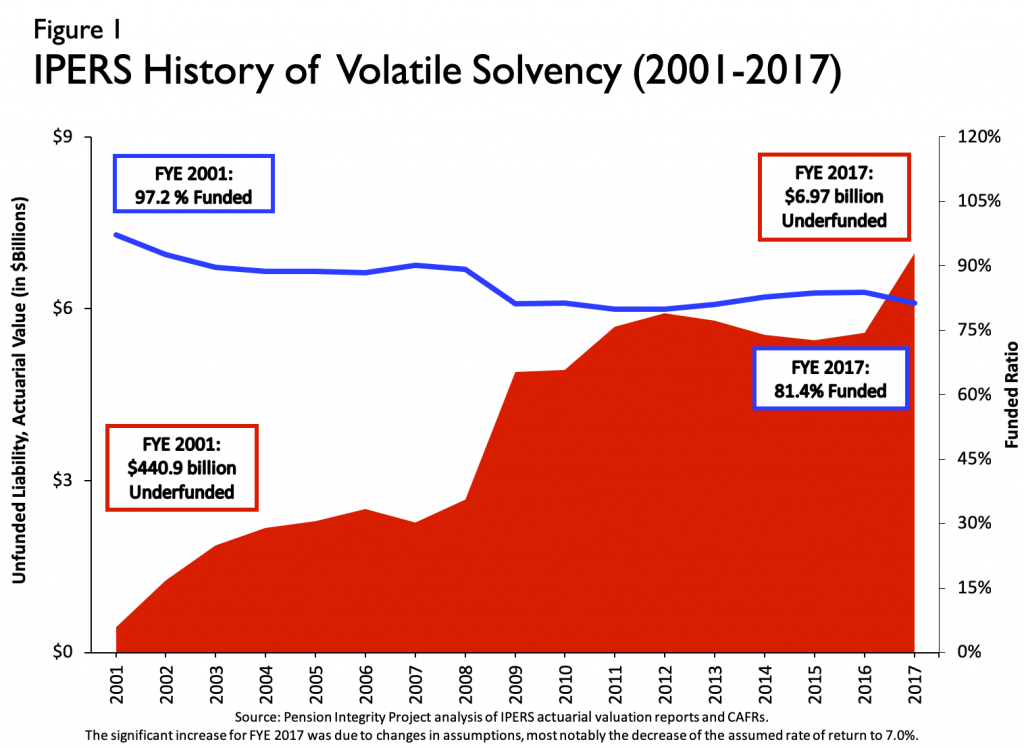 A standard measure of pension health called the funded ratio compares a pension plan’s current assets to the value of benefits a plan has promised to pay out (the accrued liability). As shown in Figure 1 above – IPERS’ unfunded accrued liability—or the value of future pension benefits promised but not currently funded—grew from $441 million in fiscal year 2001 to $6.97 billion in fiscal year 2017. In fiscal year 2017, the funded ratio for IPERS was 81.4 percent, which is well below the peak of 97.2 percent funding the plan experienced in fiscal year 2001. Furthermore, the American Academy of Actuaries’ Pension Practice Council recommends a funded ratio of 100 percent, a condition which would imply all currently invested plan assets are sufficient enough to earn the assumed rate of return needed to provide the benefits promised to future retirees.

Although investment experience has an impact on the funded ratio and accrued pension debt, it is just one of several factors. Statutory limits on contribution rates have arbitrarily limited required payments into the system, resulting in frequent contribution deficiencies. Missed assumptions such as unexpected demographic changes have also played a role. Similarly, IPERS has adopted more conservative assumptions for future investment returns, which affects the valuation of plan liabilities.

The aforementioned issues are illustrated below in Figure 2. From fiscal year 2001 to fiscal year 2017, underperforming investment returns accounted for $1.96 billion in accrued debt. During the same period. During the same period, contribution deficiencies accounted for $1.19 billion in accrued debt. This massive growth in unfunded pension liabilities is also evident in the steady decline of the plan’s funded ratio (see Figure 1). 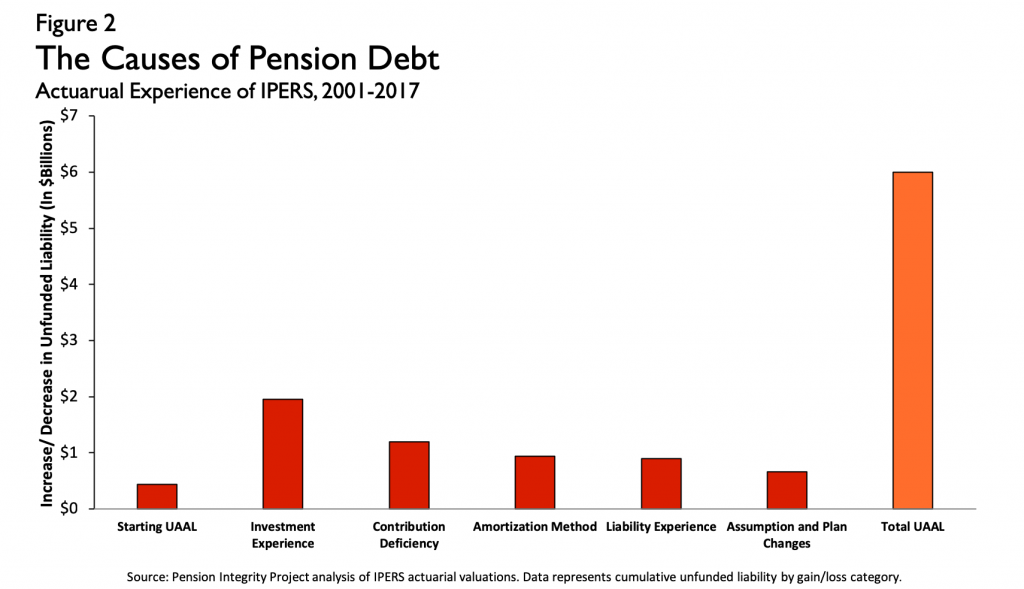 Fortunately, the U.S. is in the midst of one of the longest ongoing economic expansions in American history, the benefits of which have been well noted in financial indices, manifesting into notable gains for private and institutional investors nationwide. Pension funds are no exception to this.

However, strong investment gains are not guaranteed and cannot indefinitely mask structural issues. The Iowa state government has a duty to uphold its obligations made to state workers. Retirement benefits are a form of deferred compensation and represent an earned benefit. To ensure the retirement security of public servants, state legislators should explore those factors that have and could continue to impact the fiscal solvency of the system in the long run if left unchecked.