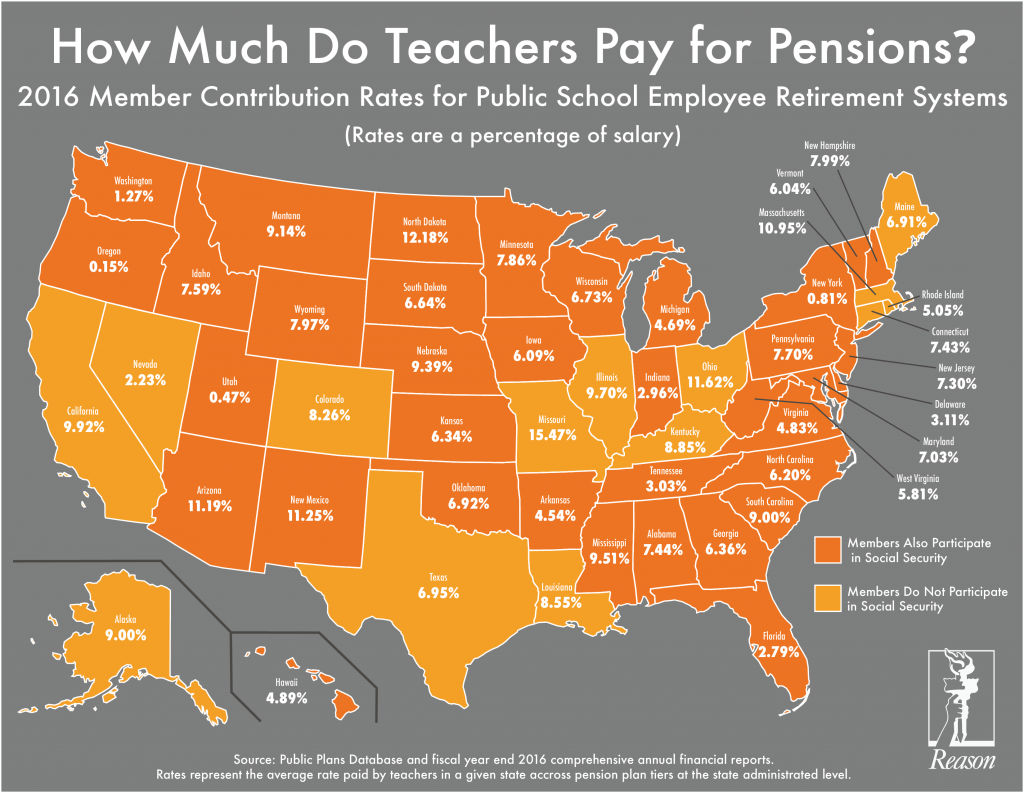 Most defined benefit pension plans require a contribution from the participant, which is drawn as a percentage from their paycheck. For teachers’ pensions, the contribution rate varies greatly from state to state. This map shows the average percentage of payroll that teachers contributed towards their future pensions in 2016.

Several factors drive these differences in teacher payment rates from state to state.

Second, states offer a wide range of benefits for teachers, leading to varying total normal cost rates and thus different approaches from state legislators as to how much to require from employees to cover those normal costs. For example, Ohio is known to have some of the highest average benefit payments for retirees — it is thus no surprise that they have one of the highest employee contribution rates in the country.

It is worth noting that in some states the employee contribution rate is actually paid for—or “picked up”—in full by the employer as part of a collective bargaining agreement. In such a case, the employee does not see a contribution reduction taken out of their paycheck — though the employer pick-up will still influence the future capacity to increase teacher compensation, as pension contributions are tacitly reduced from teacher take home pay anyway.

At least two states, Oregon and Utah, require no contribution from their teachers, yet still have small contribution percentage displayed due to voluntary service cost purchases from their employees.

The amount that teachers contribute to their pensions has many important ramifications for each state. Looking at the average rates across the country can help state policymakers put employee contributions to teacher pension plans in full context relative to other states and can help inform policy debates about reforming underfunded teacher pension systems. These contributions rates, along with all benefit structures, are also important factors for teachers to consider when making decisions on where to work.

Notes on the Data

Contribution rates were calculated by taking the total employee contributions for state administrated defined benefit plans and dividing them by the total covered payroll in 2016. By state administrated we mean plans that are authorized by state statute and managed by a statewide entity, but not municipally administrated plans that might cover local teachers. For example, in Missouri most state teachers are in the Public School Retirement System of Missouri, but teachers in St. Louis are in the Public School Retirement System of the City of St Louis, which is not captured in our data set.

The source of payroll, contribution, and Social Security data for this figure includes data from the Public Plans Database as well as analysis of Comprehensive Annual Financial Reports for states with missing data from the PPD.

Additional notes on specific states include: