Actuarial consulting firms play an essential role in informing and advising pension management teams about the funding status of retirement plans. The firms compute contribution rates required to maintain pension fund solvency, using an array of economic and demographic assumptions. Incorrect assumptions can create major funding shortfalls and cause long-term financial trouble for both pensioners and, in the case of public plans, state and local governments. Because of this, actuarial firms have strong incentives to uphold their reputations as reliable and competent pension evaluators.

Reason Foundation compiled data from over 500 public defined benefit pension plans, and has ranked the actuarial firms responsible for evaluating those plans by their total accrued actuarial liability — the reported obligation that pension plans currently owe based on their own assumptions. (If actuarially accrued liabilities for the plans were not available, total pension liability figures from GASB reports or CAFRs were instead utilized.) The total unfunded liability — the amount by which plan liabilities exceed plan assets (or vice versa) — was also included in the analysis.

Gabriel, Roeder, Smith & Company (GRS) is at the top of list, overseeing plans that report more than a combined $1.1 trillion in accrued liability and comprising nearly one-fourth of the database’s total liability of over $5 trillion. Milliman is second, overseeing more than $712 billion in reported plan liabilities, and Cavanaugh Macdonald third, responsible for plans with about $690 billion in liabilities by their own measurement. These translated to roughly 13.9% and 13.5% of the market share, respectively. Segal is fourth, responsible for plans with around $551 billion in plan liabilities, and CalPERS fifth, with $441 billion. Segal comprises 10.8% of the market share and CalPERS 8.6%.

GRS’s top rank in our league table is largely explained by the fact that it handles some of nation’s biggest public plans including Texas’ Teacher’s Retirement System, Ohio’s Public Employees Retirement System, and Wisconsin’s Retirement System. Its domination of the public-sector landscape may be due to its specialization in public sector pensions, health and welfare plans, defined benefit administration, and other post-employment benefits (OPEB) since 1938. It is a private company headquartered in Southfield, Michigan.

Cavanaugh Macdonald, based in Atlanta, GA, and Omaha, NE, specializes mainly in actuarial and benefit consulting. The firm is relatively small, but it is responsible for evaluating large pension plans, including Virginia’s Retirement System and the Public Employees’ Retirement Association of Colorado.

Segal Consulting was founded in 1939, and provides consulting services for public sector health and retirement plans. It has over 1,000 employees in the U.S. and Canada.

Conduent is the only major actuarial firm near the top of the list with a history of mergers and acquisitions. Much of its current client base was built up under the aegis of Buck Consultants.  In 2009, Xerox Corporation acquired the parent of Buck but just two years ago it spun off Conduent as its own a publicly-traded company, boasting more than 40,000 employees in more than 40 countries. Conduent offers a wide range of business services to public and private clients.

Several states have proprietary auditors perform actuarial services for some or all of their plans. California’s CalPERS, Massachusetts’ Public Employee Retirement Administration Commission (PERAC), South Dakota’s Retirement System, and Washington’s Office of the State Actuary maintain data and publish reports on some of their states’ pension plans. New York State has an Office of the Actuary that performs valuations for the State and Teachers Retirement Plan, and New York City has a similar office overseeing several different city pension plans.

Other firms that play a notable role in public pension consulting include Cheiron; PricewaterhouseCoopers; Foster & Foster, Actuaries and Consultants, and the Hay Group.

Unfunded liabilities can provide more context regarding the overall health of pension plans. Reason’s database of over 500 plans covers over $5 trillion in reported plan liabilities, and over $1.4 trillion in reported unfunded liabilities (based on each plan’s own assumptions and funding methods). When it comes to total pension debt, GRS continues to rank at the top of the list, overseeing plans with over $322 billion in unfunded liabilities. However, Cavanaugh Macdonald and Milliman switch places, with Cavanaugh Macdonald moving into second place with over $226 billion in plan unfunded liability compared to Milliman’s nearly $202 billion. Massachusetts’s PERAC and Foster & Foster enter the top 10, while both of New York State’s auditors drop in ranking (representing smaller unfunded plan liabilities).

Analysis of historical valuations reveals that plans tend to employ the same actuarial firm over time. Within the top 25 plans ranked by highest reported liability, only three had contracted with different firms since 2010, and seven had contracted with more than one firm since 2005. Conduent (formerly Buck Consultants) had evaluated the Teachers Retirement System of the State of Illinois plan until Segal took over in 2015. Segal also took over the evaluations of the State Teachers Retirement System of Ohio in 2013, prior to which both Conduent (formerly Buck Consultants) and PricewaterhouseCoopers (PwC) had served as the plan’s chosen actuarial firms.

For more information, Reason has provided the database of plans used for this analysis, which can be accessed here. Reason is always looking to expand its database of public pension plans, so please contact Marc Joffe at marc.joffe@reason.org with additional reports that may not have been included. 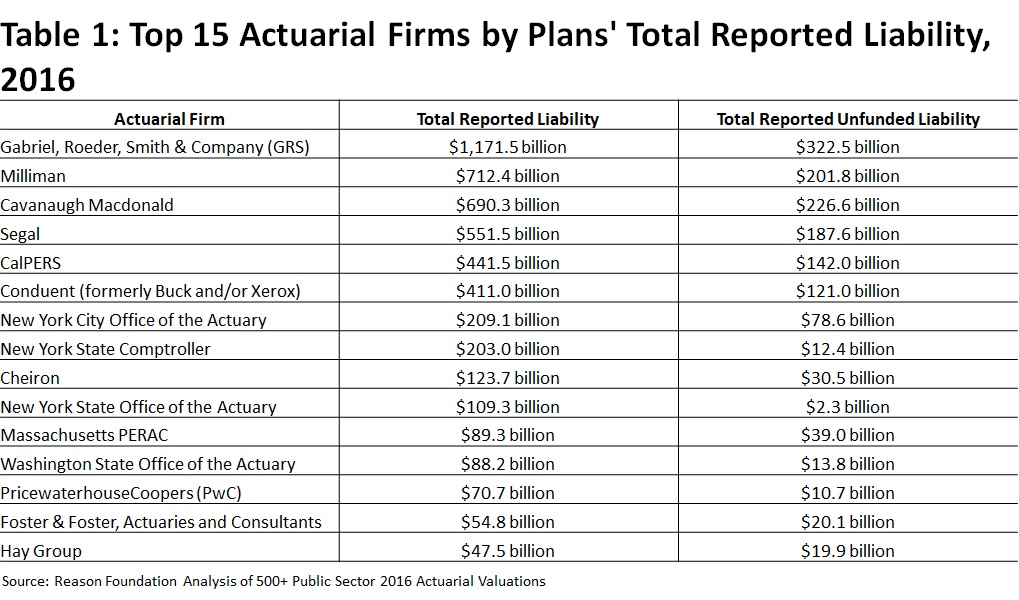