Those on both sides of the pension reform movement are rightfully concerned over pension systems’ experiences with hedge funds and other alternative investments. Some of these concerns are legitimate, as hedge fund investments tend to come with high management fees that can only be justified with outstanding performance. Others are based on more general, populist mistrust of financial institutions. Asset allocation decisions for pension plans are a serious issue, but opponents of hedge fund investments can do themselves a disservice when they make sweeping claims that are divorced from the primary cause for the rise of hedge fund investments by pension systems — the need to find ways of hitting increasingly unrealistic assumed rate of return targets.

To begin, what exactly is a hedge fund? In the simplest terms, a hedge fund is a financial institution that makes actively managed investments to pursue above-market returns using some supposedly unique insights about the market or a specified strategy that is better than just investing in an index fund. It is thus inaccurate to use “hedge funds” as a catch-all for investments beyond the traditional mix of bonds and stocks. Like real estate or private equity, hedge funds are one component of a larger set of assets categorized as “alternatives.”

Other alternatives that pension systems invest in include derivatives (an asset whose value is based on another underlying asset), high-yield bonds (bonds with high payouts due to a risk of default), infrastructure (via a wide array of infrastructure investment funds) and, in a few rare instances, timberland (yes, forests).

Unfortunately, hedge fund returns have been rather lackluster in recent years. This was especially true in 2016, as many hedge funds bet against Brexit and Trump’s election (although some managers are optimistic given the Trump administration). Below is a comparison of popular indices generally considered representative of general market performance compared to top hedge fund indices for the year 2016. Some hedge fund strategies did well on the aggregate, but there is high variance between individual funds. 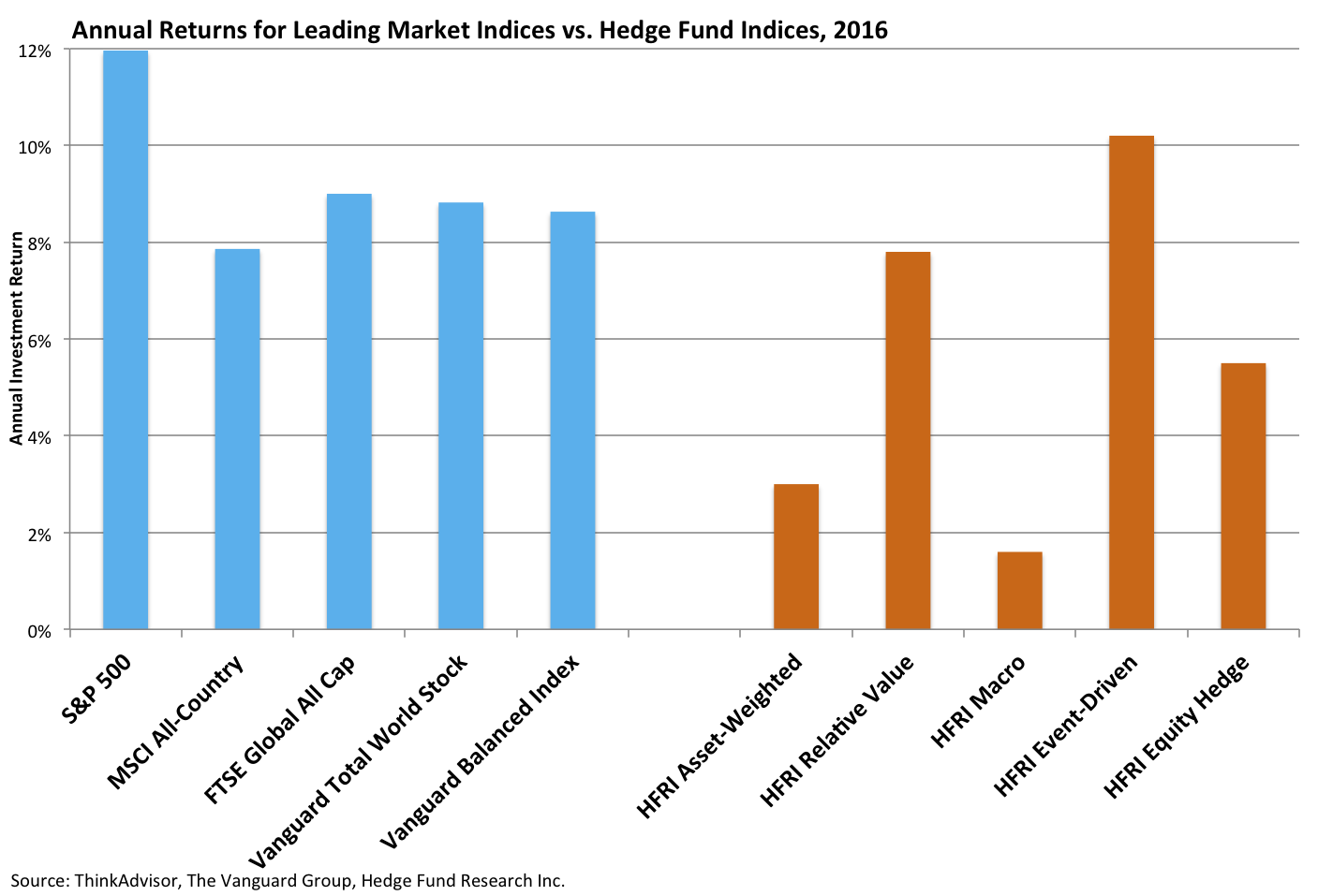 To make matters worse, hedge funds typically charge substantially higher fees for their services relative to more straightforward index fund investment. Many top firms stick to the “2 and 20” fee structure (2% flat fee and then a 20% of return on investment “performance fee”), much to the frustration of investors. Average management fees are closer to 1.5% with an 18.7% performance fee— which would be fine if the returns generated made it worth it.

That said, many plans managed to outperform a simple 65/35 mix of stocks and bonds over the past 10 years thanks to investment in alternatives. While the averages may not be great, certain plans have found the right mix of investments — including hedge funds — to make it work. Yet, at the same time other pension funds have managed similar total portfolio returns without such sophisticated investments.

One explanation for this is almost unsatisfyingly simple: some pension funds are just better at investing than others. Alternatively, the pension systems that have done well could just be lucky. A 2009 study found that only the top 10% of hedge fund managers were able to beat the market through skill. Economic theory tells us that, in the long run, you can’t beat the market. But the purpose of hedge funds is to defy the efficient market hypothesis, and try to get ahead of investments to achieve higher returns.

It’s perfectly reasonable for a private investor to attempt to beat the market (an inability to beat the market in the long run implies some chance of doing so in the short run), but there are problems unique to public sector pensions that should make managers wary when investing in alternatives.

These concerns range from a relative lack of competitiveness in the field due to lower salaries at pension funds (relative to private sector firms) to incompetence, or even outright corruption. Quid-pro-quo corruption, however, is relatively rare.

To quote H.L. Mencken, “[e]xplanations exist; they have existed for all time; there is always a well-known solution to every human problem—neat, plausible, and wrong.” The Sage of Baltimore is right when it comes to the history of pensions investing in hedge funds and critics of these investments should be wary when making sweeping claims about these investments.

The easiest way for public plans to get away from figuring out hedge fund investments would be to lower assumed rates of return to targets that can be hit without much or any asset allocation to alternatives. That, however, would reveal the true cost of most defined benefit plans — which many legislators are unwilling to embrace.

This naturally leads to a question of whether defined contribution (DC) plans might be a more cost effective way of providing retirement benefits that provide retirement security and budgetary predictability (relative to appropriately priced defined benefit plans). The straightforward answer is that, yes, they can — depending on the contribution rates necessary to provide retirement benefits and the specific pricing of the defined benefit plan being compared.

However, opponents of DC plans often employ a more blunt argument that investing in a 401(k)-style retirement system would be a boon to hedge funds because retirees will invest with them. This argument falls apart under the slightest bit of scrutiny.

It is a contradiction to argue that defined benefit plans do not need to lower their assumed rates of return because diversified portfolios (including hedge funds) can meet their targets while also arguing that defined contribution accounts would be a problem because it would funnel money to hedge funds or other risky alternatives.

Even more baffling is the underlying belief that DC plans must rely more on alternative investments than their defined benefit counterparts. DC opponents correctly point out that such plans have historically not guaranteed any given rate of return — but, because they don’t make such promises, DC account balances tend to be invested primarily in stocks and bonds to safeguard retirement savings and rarely are invested with hedge funds.

To conclude, there are three important points to be made. First, hedge funds are not the enemy; they have upsides and pitfalls like any other investment. Some funds have fared well with hedge funds, others have not. Second, as stewards of both the taxpayers’ money and the retirement security of government employees, pension funds should probably pursue a strategy that minimizes risk, but are often trapped by the need to hit high assumed return targets. And third, because DC plans don’t need to meet any investment return, any opposition to investment in hedge funds is an argument for DC plans, not against them.