Delaware County, Pennsylvania’s jail facility, unlike all other county jails in that state, operates under a private contract, as it has since its 1998 completion. The current contract comes up for renewal at the end of this year, and while county officials note cost-savings from the contract agreement, local activists are calling for ending the contract and moving to in-house operation.

Even putting cost considerations aside, if one compares Delaware County’s jail—the George W. Hill Correctional Facility—to its peers in terms of safety and performance, the case for ending the contract appears thin. According to the Pennsylvania Department of Corrections’ data, the George W. Hill facility appears to operate much safer than an average in-house county prison, seemingly validating the county’s continued pursuit of competitively-sourced management and operations.

Pennsylvania Department of Corrections’ County Prison Extraordinary Occurrence Statistics show that, when compared to all other counties, Delaware County saw fewer average deaths, escapes (both attempted and successful), contractions of diseases, total uses of force (as well as most all categories of uses of force), and assaults on inmates (physical, sexual, inmate-on-inmate, staff-on-inmate, etc.) over 2013–2017, with disparities often several orders in magnitude. On average, an inmate was nearly twice as likely be subjected to a use of force, and three times more likely to experience a physical use of force from corrections staff over the 5-year period outside of Delaware County than inside the Hill Correctional Facility. Overall, extraordinary incidents occurred two-and-a-half times more frequently in PA prisons outside of Delaware County. 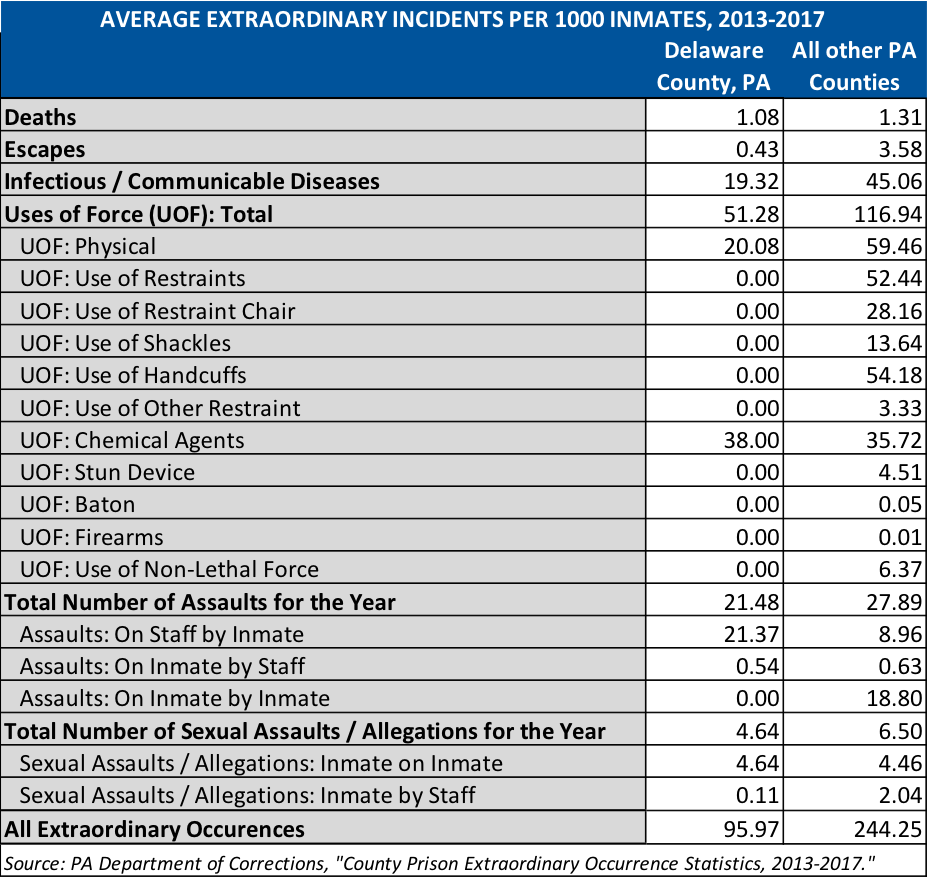 That said, Hill Correctional Facility’s operators have certainly made mistakes that required action and improvements. The facility faced multiple lawsuits over deaths and more recently settled with the family of an inmate who committed suicide in 2015.

On the whole, Delaware County’s continued desire to utilize a private operator for its prison operations suggests it is satisfied with improvements that have been made and the partnership, in terms of both cost and performance.

While many factors should be weighed and analyzed, the data from 2013-2017 in Delaware County does not suggest contracted prison operations should end. Instead, the data comparing the Hill facility’s performance to that of other counties suggests the contract should be renewed.