It’s easy to confuse pension reform advocates—particularly those on the center-right—as anti-defined benefit (DB) pension fundamentalists, taking a “defined contribution (DC) or bust” view of the issue. To be sure, there are many that, in recognition of the nearly $4 trillion of public pension debt across the nation, have adopted a “boo, pensions!” mentality. But this mindset ignores some features unique to defined benefit plans that are attractive to certain types of employees, making DB plans the more prudent option for certain employers.

In a pluralist democracy such as ours, there are numerous interests that must be balanced for the benefit of all. Certainly, the greatest priority should be the financial wellbeing of the government, as literally all government functions depend on the ability to pay for them. To this end, pension reform is sorely needed so governments can provide essential services to their citizens. But once the fiscal ship is righted, it’s important to consider how to compensate government employees, and sometimes DB plans are the best tool for the job.

First, some review: a DB pension plan is a retirement benefit in the form of a lifetime annuity, usually equal to the product of your years of service, final average salary, and a multiplier chosen by your plan (generally between 1% and 3%). For example, an employee who has worked for 30 years with a final average salary of $100,000 in a plan with a 2% multiplier will collect $60,000 a year for the rest of their life ($100,000 x 30 x 2%). The particulars vary from plan to plan; often the eligible years of service are capped along with pensionable salary, and sometimes members can opt into a plan where they select a beneficiary (usually a spouse or child) to get reduced benefits for some time period after the primary beneficiary passes away.

DC plans are more straightforward: you and your employer each contribute a fixed amount into a retirement account, which accrues interest over time. While the employer (i.e. the government) bears all the investment risk in a DB plan, the employee bears all of the risk for a typical DC plan. (Note: best practice for DC plans involves shifting risk away from the employee as they approach retirement, both by moving into safer, fixed income products as well as deferred annuities or inflation-protected bonds where risks are carried by the issuing financial institutions.)

To illustrate the difference between the benefits offered, here’s an example of the expected benefits for an employee in a DC plan or a DB plan as a function of their retirement age. 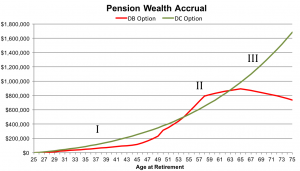 There are certain limitations to this model (for a more advanced version, check out the Urban Institute’s build your own pension plan), but it is useful for determining who benefits from different plan types. From this model, we can identify three distinct phases, two at the beginning and the end (labeled I and III) where the DC value is greater than the DB, and one in the middle (labeled II) where the value of the DB plan is greater than that of the DC plan.

From the date an employee begins their career until they become fully vested in their contributions (I), the value of a DC plan is greater than that of a DB. When an employee isn’t vested and they leave the DB system, they usually only get back their accumulated contributions plus interest, though this varies from plan to plan. The length of this “vesting period” largely determines how long the phase I period lasts.

Employees in category I would generally include younger employees, who are increasingly mobile and thus may be disadvantaged by—or may not be attracted to—plans with longer vesting periods or benefits that increase with years served rather than contributions made. For these workers, choosing a DC plan may make more sense because it lets them keep the contributions from their employers when they move to a different job.

Long vesting periods can scare away new employees, even if they would have wound up spending their career in one system—requiring someone to spend 10 years at a job just to be eligible to receive all of the employer contributions made on their behalf is a bit like having to get married after a first date. Some vesting periods are even longer, and almost half of all public sector employees leave service without vesting.

After employees vest, there is a spike in the projected value of benefits. It is in category II that employees become eligible for an annuity, guaranteeing a stream of income for life that increases with both salary and years served.

If employee contribution rates are the same for both the DC and DB plan, then employees who plan to spend a relatively long amount of time at their jobs will favor a DB plan, and employers looking to maximize employee benefits (hopefully without breaking the bank) when trying to attract employees who are looking for a career with the same employer for a fixed amount of time will likely offer for this benefit. The professions that fit this description are public safety workers, like police and firefighters. Because these employees benefit from local knowledge of the communities they protect and serve, incentives to stay in one place are important.

But something strange happens after an employee in a pension system reaches their maximum number of service years; the total value of their benefits starts to decline. Once the maximum number of service years used to calculate their pension is reached (usually between 20 and 30 years), benefits can only increase with their salary. Because the pension in this model only pays out for the life of the beneficiary, the older the employee gets the less money they will receive as they put off retirement. Though a drawback for employees who plan to work well into their golden years, this is probably a necessary provision for public safety employees given the physically demanding nature of their jobs.

In the past, it was possible to work for 30 years and retire at 55 or 60, but this is becoming increasingly unsustainable as mortality rates improve. Responding to economic realities, more people are working longer, which pushes them into category III, when the value of a DC plan again exceeds the value of a DB plan. Proponents of DB plans say their goal is to increase retention, but this isn’t exactly the case. Rather, pensions encourage retention for a fixed period of time. For employees who plan to work much longer careers, DC plans are a better option.

Of course, this comes with the caveat that though the value of the benefit is larger, those who work longer will have less time to spend it. Just because they can’t take it with them, however, doesn’t mean there isn’t value to earning this money. For the same reason a member of a DB plan would want to opt for a survivor benefit, members of a DC plan may want to work longer to leave money behind for their survivors.

Of course, the particulars of each plan will determine which option is more attractive to employees. A particularly generous DB plan with a short vesting period may, all else equal, be better than a DC plan with low contribution rates.

To summarize, the most important consideration that governments should make when determining employee compensation is the overall sustainability of the government’s finances. After that basic requirement is satisfied, however, pro-DB or DC fundamentalism shouldn’t distract from the primary goal of providing the best compensation possible to attract the best public servants possible. To this end, DB and DC plans cater to different employee types, and policymakers should take note when designing their retirement plans.