Combined, the CORP pension reform effort is expected to shift approximately 90% of new hires into a DC retirement plan and nearly eliminate the potential for new unfunded liabilities once the current pension debt is paid off.

The CORP reform legislation had strong bipartisan support—passing the House of Representatives overwhelmingly with a 53-4 vote, and the Senate by a 23-7 vote. This overwhelming support was possible largely due to the fact it is the negotiated result of a 6-month, collaborative stakeholder process launched by State Senate President Pro Tem Debbie Lesko that ultimately garnered the support of a wide range of stakeholders, including public safety associations, employers, and taxpayer advocates.

Like the PSPRS reform in 2016, the Pension Integrity Project at Reason Foundation played a central role in designing policy options and negotiating the final reform. Our project team provided education, policy options, and actuarial analysis for stakeholders throughout the process, and we helped facilitate a consensus among stakeholders on the conceptual design and other parameters of the reform.

Key public safety associations were active in the stakeholder discussions—specifically the Arizona Police Association, the Consolidated Law Enforcement Associations of Arizona, and the Arizona Police Officer Association—and ultimately supported the CORP reform package in the interest of improving the plan’s solvency and putting a sustainable retirement system in place for the future. Additionally, the state lodge of the Fraternal Order of Police took a neutral position on the main reform legislation (SB 1442), but supported the companion legislation (Senate Concurrent Resolution 1023) that refers a constitutional amendment related to the PBI-to-COLA change to the ballot.

That a comprehensive pension reform could attract such a diverse group of stakeholder supporters is noteworthy on its own. Even more important is that the CORP pension reform marks the completion of a two-year bi-partisan process of overhauling retirement benefits for all public safety employees in Arizona. The CORP and PSPRS reforms together offer evidence that a collaborative, stakeholder engagement process can successfully deliver substantive policy change without the typical political divisiveness often seen in pension reform debates.

The Need for Reform 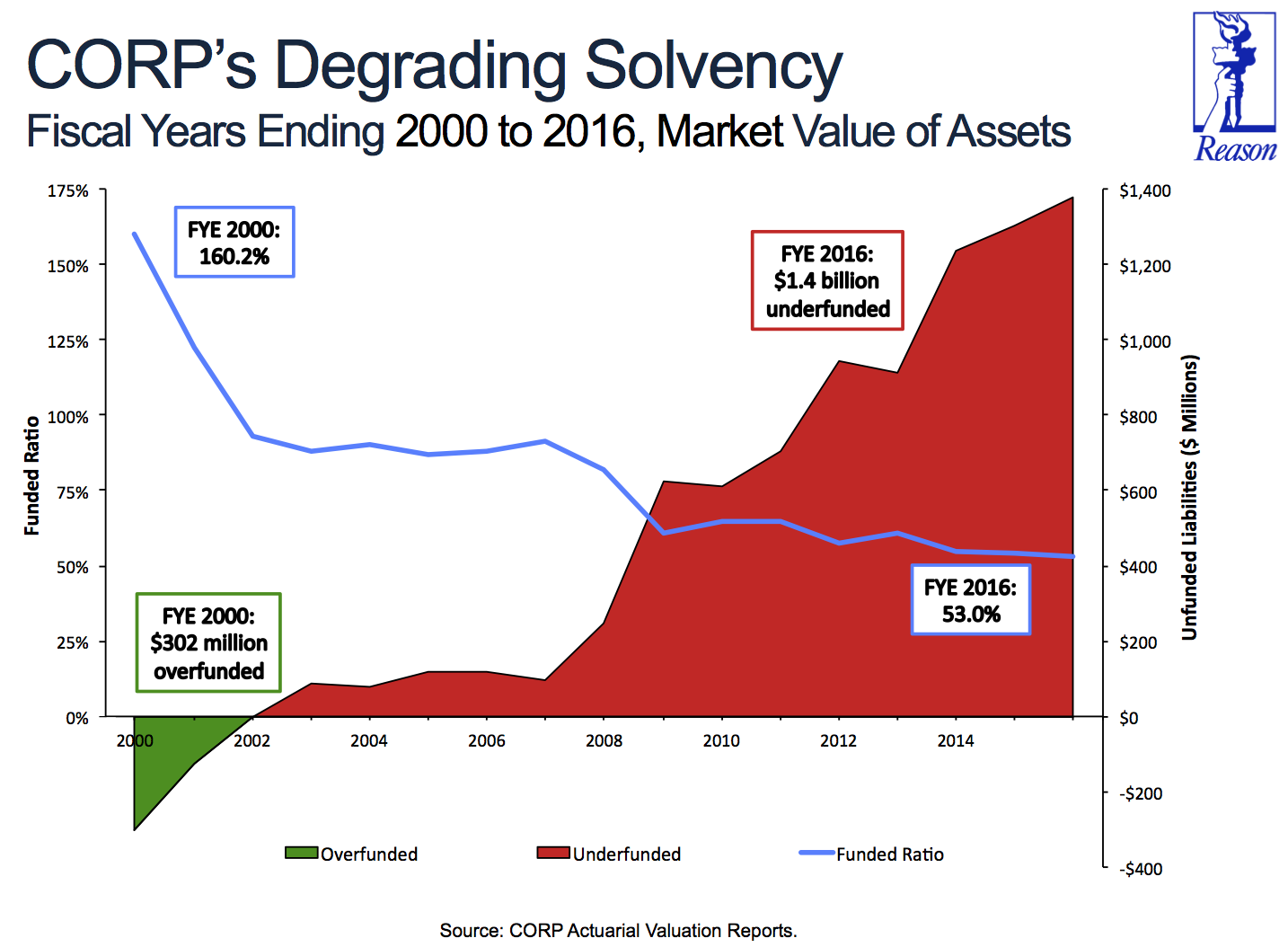 CORP’s degrading solvency since 2000 has led to dramatic increases in annual pension costs for state and local agency employers participating in CORP—total employer contribution rates increased from 3.2% to 18.2% over the last 15 years—which have largely been driven by rising payments to cover the plan’s $1.4 billion in unfunded liabilities. For employers, the growth of these pension debt payments is effectively crowding out other public services and areas of the budget, making it ever more difficult to hire new corrections officers and make pay more competitive. Further, the courts have struck down several previous pension reforms enacted in recent years, and other reforms remain under litigation, creating the need for a new solution.

The PBI mechanism has undermined CORP’s solvency by skimming assets off the top of the fund in years of good market performance and paying them out as permanent benefit increases to retirees over time to partially offset inflation. Among the problems associated with the PBI:

Given current market conditions and future market forecasts, it is doubtful whether retirees would receive future PBI distributions on a regular basis. Until two years ago when the PBI account ran dry, most CORP retirees had received a PBI benefit for well over a decade, despite the continuing decline in CORP’s funding status. Now that the PBI account is empty, the plan would need to have several years of very strong returns for retirees to receive a full PBI.

In addition to the PBI problem, CORP has seen underperforming investment returns relative to its assumed rate of return. 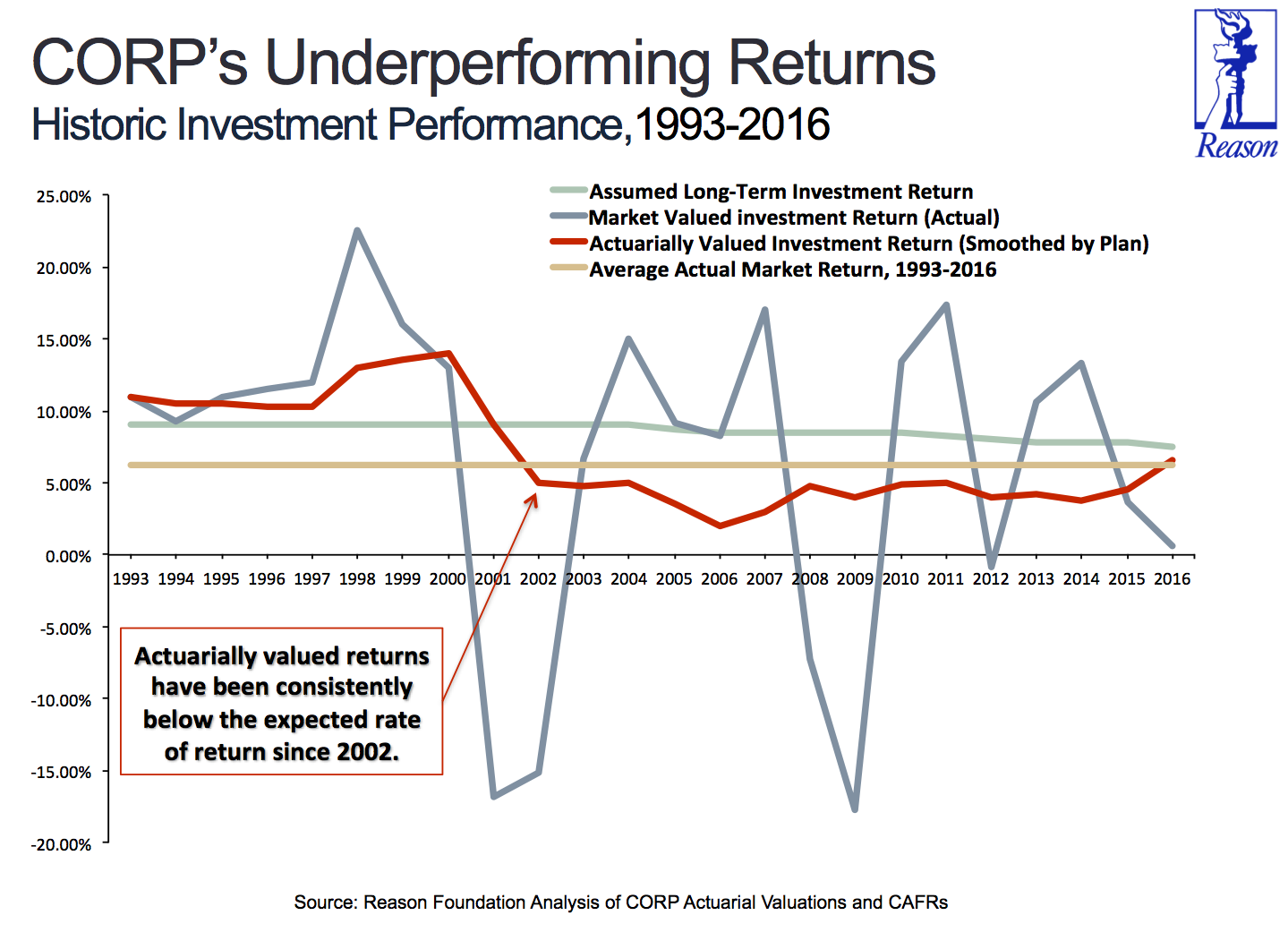 Over the past 25 years actuaries made recommended contribution rates based on assumed investment returns of between 7.4% to 9%, depending on the year. However, the plan’s average market return since 1993 is just 6.2%, and the average market return over the past 15 years is a dismal 4.4%. CORP’s assets are commingled and invested together with PSPRS, and thus the plan has wrestled through the same challenges of increased volatility in rates of return as the investment portfolio has decreased the lower-risk fixed income allocation and increased the amount of equities and alternatives. The chase for yield has not been particularly successful however, and the average actuarially valued return since 2002 has been just 4.3%.

The primary goals of the CORP reform included:

1. Improvements to Ensure Benefit Sustainability for Current Employees and Retirees

For current employees and retirees, the reform will replace the uncertain and unsustainable PBI with a traditional, pre-funded cost of living adjustment (COLA) that provides certainty in retirement. This will serve the public interest by fixing the broken PBI mechanism that has been a major factor causing increased unfunded liabilities:

The reform creates an entirely new retirement plan design for all new correctional and detention officers entering CORP, which today account for approximately 90% of plan members. CORP employees hired on or after July 1, 2018 that are not sworn probation/surveillance officers will be offered a defined contribution (DC) retirement benefit:

The reform will allow all new sworn probation officers or surveillance officers hired on or after July 1, 2018 the choice of entering the full corrections defined contribution plan described above, or a modified, lower-risk defined benefit plan. The new Tier 3 Probation defined benefit plan:

In addition to improving retirement security and reducing financial risk, one of Sen. Lesko’s policy priorities outlined at the beginning of the process was to keep the reform cost-neutral over the long-term. In the end, the CORP reform achieved this goal and is expected to yield short-term cost savings and long-term cost neutrality:

The CORP reform will reduce risks over time by shifting the majority (approximately 90%) of new hires into a defined contribution plan, where, by definition, there is no possibility of new unfunded liabilities. The primary value of the reform from a solvency perspective is that it creates a long-term path to a scenario where CORP does not carry significant financial risks:

It must be noted that the reform does not reduce the amount of pension benefits already promised—all of those still need to be paid and remain exposed to underfunding (unless the PSPRS/CORP board makes substantial changes to key actuarial assumptions). Nonetheless, with fewer liabilities exposed to underperforming asset risk, total unfunded liability payments will be less under the proposed reform in an underperforming scenario than under the baseline.

Creating a defined contribution plan for most new hires helps current employees and retirees in the existing CORP pension plan by capping liabilities and improving the plan’s solvency over time, as there would be fewer accrued liabilities exposed to the risk of underperforming assets or other overly optimistic actuarial assumptions.

The reform also creates a secure, portable benefit, allowing newly hired correctional/detention officers to move their pension benefits anywhere (unlike the current CORP pension plan). Further, the reform will offer a benefit better suited to the experience and demographics of the profession:

Last, the reform also creates more beneficiary choices for new employees, as retirement benefits under reform could be passed on to any beneficiary. By contrast, only spouses or minor children are entitled to a portion of the employee’s pension today.

Like PSPRS in 2016, the CORP reform offers an excellent example of how state and local governments can approach meaningful pension reform. In both cases, stakeholders from across the spectrum convened and successfully forged a consensus agreement on what can often be a politically contentious issue. In CORP’s case, the reform package gained bipartisan support in the legislature, plus the support of employee associations, employers, and taxpayer advocates.

The reform takes a multifaceted approach to tackling CORP’s solvency problems. It will replace the broken permanent benefit increase mechanism undermining the plan with a traditional COLA tied to inflation. It will also offer new retirement plan designs for future CORP members that will provide better retirement security for employees while minimizing taxpayers’ exposure to financial risk. Overall, the reform is designed to ensure that all CORP pension commitments are met, while putting into place a more financially sustainable retirement plan for the future.