Today brings some positive pension news: Alaska’s governor has decided to halt an initiative to issue about $3.3 billion in pension obligation bonds.

The plan proposed by Gov. Bill Walker was to target borrowing at a fixed rate of 4%, add the borrowed funds to the assets of Alaska’s two largest pension plans, and then invest those assets along with the rest of the pension portfolio, which has an assumed rate of return of 8%. The state legislature pushed back on the idea, though, leading the administration to back down from its plans to borrow the large sum.

This is good news because there are a range of reasons for why issuing pension obligation bonds is a bad idea, which my colleague Daniel Takash covers in a new commentary for Reason.org.

Of the biggest of theses risks that this kind of bond issuance is really just an investment gambit. The state of Alaska would be suggesting it could get a better return on the several billions in borrowed dollars than those in the private sector who had that money to lend; on the other side of the trade would be the institutions with available capital taking the position that the 4% yield from Alaska was the best use of their resources in context of their personal investment strategy. For investors looking to park some of their assets in fixed income and Treasury yields offering only around 2.5%, the prospect of a 4% bond yield would come off as a great return for those institutional investors willing to lend Alaska the money.

Meanwhile, Alaska would be taking this risk on the grounds that they’d get a return greater than 4% from their portfolio. Another problem for the state here, though, is that they’ve historically underperformed. Over the past 25 years Alaska’s Public Employees’ Retirement System (APERS) and Teachers Retirement System (ATRS) have fluctuated between 8% and 9% assumed rates of return, but the systems combined have earned just 6.9% over that span. As shown in the figure below, the joint investment return for APERS and ATRS over 20 years is 5.8% and over the past 15 years 4.7%. This is not the kind of historic investment performance pattern that inspires confidence in taking on such a large financial risk. 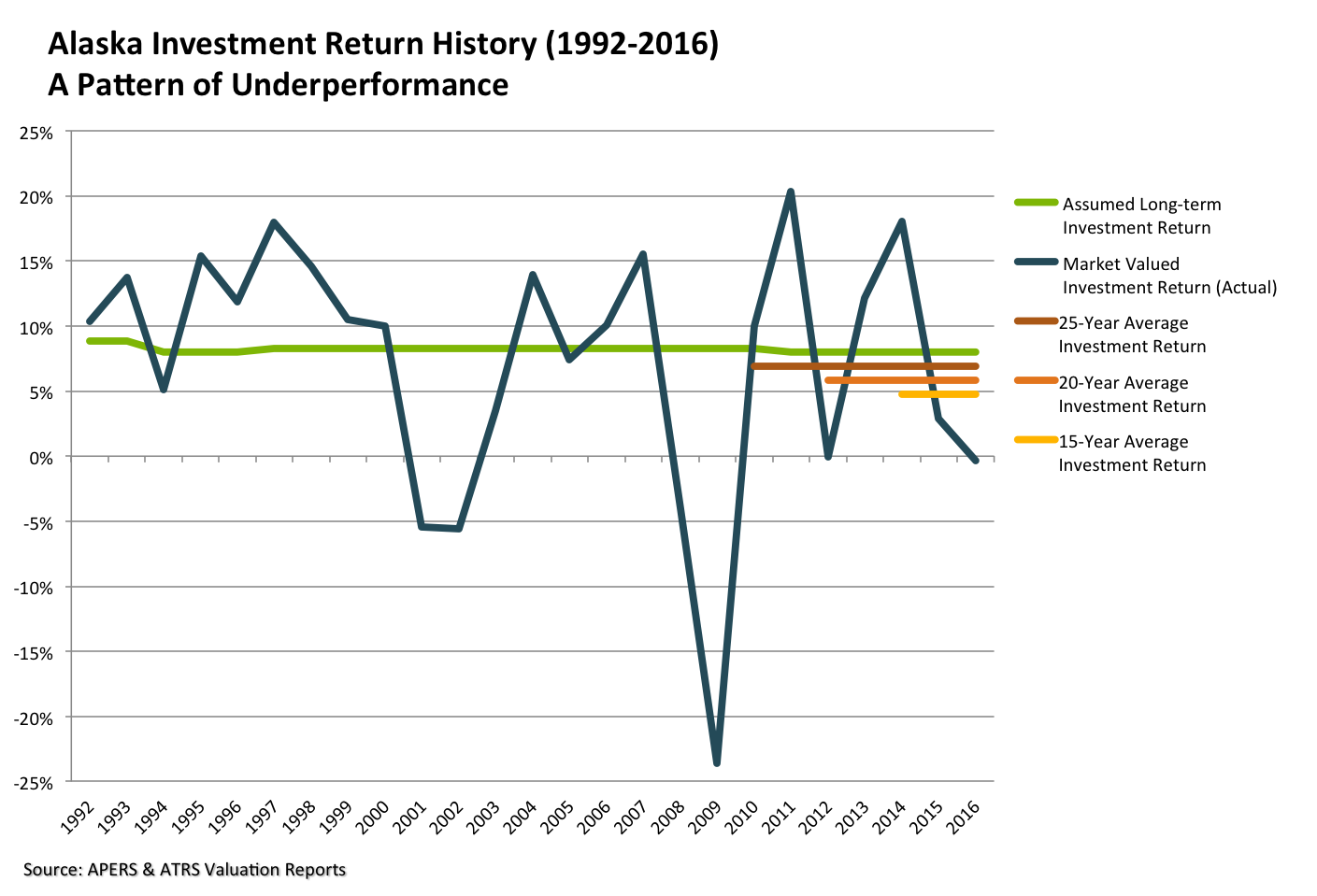 But even beyond past performance and looking forward, Alaska’s pension investments will be exposed to the same “new normal” for institutional investors that all public plans have been. Alaska’s legislature was wise to push back on the pension obligation bond idea, and the state should continue to reject this approach in the future. A better way forward for plan solvency would be to allocate assets to less risky classes that would align with a more realistic assumed rate of return, and consequently pay the contribution rates necessary to fund the existing obligations of the closed APERS and TRS plans.

For more on Alaska’s investment history and their implementation of the 2005 pension reform, see my paper with Truong Bui published earlier this year.