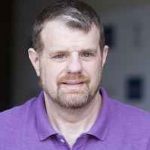 Shackford comes to Reason after nearly a decade of serving in various editing positions for Freedom Communications, a libertarian-leaning media chain that may or may not still exist depending on when this profile is being read. Prior to moving to Reason, he was editor in chief of the Desert Dispatch in Barstow, California, where he wrote editorials focusing on libertarian issues like wasteful municipal spending, school choice, the drug war and abuse of police authority. He also editorialized about state and federal transportation and energy spending. Living in the midst of heavily subsidized solar developments in the Mojave Desert, he warned about potential problems with the Department of Energy’s guaranteed loan program months before Solyndra actually filed for bankruptcy. He was one of the few newspaper editors in California to endorse Proposition 19 to legalize marijuana.

Before becoming part of the massive libertarian media establishment, Shackford once weighed in on much more important matters as a show recapper at Television Without Pity. There, his dislike of Clay Aiken and his disappointment with the writing on Firefly earned him the enmity of the entire Internet. All of it.