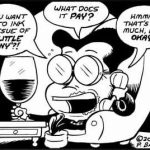 Peter Bagge is a contributing editor and cartoonist at Reason magazine and Reason.com.

Peter Bagge was born in Peekskill, New York. He studied briefly at the School of Visual Arts in New York City in the mid-'70s. Upon exposure to the work of underground comics, particularly the work of R. Crumb, Bagge plunged into cartooning with a vengeance.

In the early '80s Bagge co-published three issues of Comical Funnies (1980-81), a New York-based comic tabloid which saw the debut of Bagge's dysfunctional suburban family, The Bradleys. Bagge broke into R. Crumb's legendary magazine, Weirdo, with "Martini Baton," and Bagge took over as managing editor of that magazine from 1983 to 1986.

Bagge also started his own comic book, Neat Stuff, for Fantagraphics Books, producing 15 issues from 1985 to '89. Buddy Bradley, the Bradleys' alienated and pessimistic teenage son, emerged as Neat Stuff's most engaging and fully-realized character. In 1990, Neat Stuff evolved into a new title, Hate, which exclusively followed the foibles of the semi-autobiographical Buddy Bradley. Hate became the voice of the twenty-nothing slackers as well as being hailed by critics for its brilliant characterization in its complete chronicle of the 1990s. Hate continues to appear in print, albeit less frequently, under the title Hate Annual.

Bagge's distinctive in-your-face illustration style has also appeared on many record and CD covers, and his comics have been featured on the (now defunct) Web site Suck.com. Other comic work includes writing an all ages comic book for DC called Yeah! (drawn by Gilbert Hernandez), and more recently Sweatshop, also for DC, which satirizes the comics industry. He wrote and drew a one-shot satire of Spider-Man for Marvel, as well as a similar treatment of The Hulk that remains in limbo. He also writes and draws a weekly comic strip about "Bat Boy" for The Weekly World News .

Peter Bagge lives in Seattle with his wife Joanne and daughter Hannah.