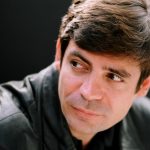 Nick Gillespie is editor at large of Reason, the libertarian magazine of "Free Minds and Free Markets." The two sites draw over 4 million visits per month and have been named among the nation's best political sites by Playboy, Washingtonian, National Journal, and others. Gillespie is co-author, with his Reason colleague Matt Welch, of The Declaration of Independents: How Libertarian Politics Can Fix What's Wrong With America, published in 2011 by Public Affairs (an updated paperback edition was published in 2012).

The Daily Beast, where he now writes a column, named Gillespie one of "The Right's Top 25 Journalists," calling him "clear-headed, brainy...[and] among the foremost libertarians in America." He is a two-time finalist for digital National Magazine Awards for his work on "UPS vs. FEDEX: Ultimate Whiteboard Mix" and the documentary series Reason Saves Cleveland with Drew Carey: How to Fix the Mistake on the Lake and Other Once-Great American Cities.

Gillespie served as Reason magazine's editor in chief from 2000 to 2008. Under his direction, Reason won the 2005 Western Publications Association "Maggie" Award for Best Political Magazine. Gillespie originally joined Reason's staff in 1993 as an assistant editor and ascended to the top slot in 2000. In 2004, Gillespie edited the book Choice: The Best of Reason, an anthology of the magazine's best articles. The Washington Post featured Gillespie's tenure at Reason magazine, asking, "Which monthly magazine editor argues that the spread of pornography is a victory for free expression? And that drugs from marijuana to heroin should not only be legalized, but using them occasionally is just fine? And is also quite comfortable with gay marriage? The answer is Nick Gillespie, libertarian and doctor of literature, who...is injecting [Reason magazine] with a pop-culture sensibility."

Gillespie's work has appeared in The New York Times, The Washington Post, The Wall Street Journal, The Los Angeles Times, The New York Post, Slate, Salon, Time.com, Marketplace, and numerous other publications. He was a regular contributor to the late, lamented satire site, Suck, where he wrote under the name Mr. Mxyzptlk.

He is a frequent commentator on radio and television networks such as National Public Radio, CNBC, CNN, C-SPAN, Fox Business, Fox News Channel, MSNBC, and PBS. He has worked as a reporter for several New Jersey newspapers and as an editor at several Manhattan-based music, movie, and teen magazines. He is almost certainly the only journalist to have interviewed both Ozzy Osbourne and Nobel laureates in economics such as Milton Friedman and Vernon Smith.

In 1996, Gillespie received his Ph.D. in English literature from the State University of New York at Buffalo. He also holds an M.A. in English with a concentration in creative writing from Temple University and a B.A. in English and Psychology from Rutgers University. Gillespie, the father of two sons, lives in Washington, DC, and Oxford, Ohio.