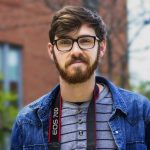 John Osterhoudt is a video producer for Reason TV and a Poynter-Koch Media and journalism fellow.

Osterhoudt is trained as a director of theatre and film. Prior to joining Reason he wrote, directed, and produced plays, documentaries and short films, which can be found at johnosterhoudt.com.

He lives and works in Los Angeles.