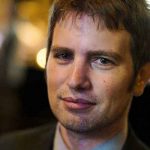 Jim Epstein is a writer and producer with Reason.com, where he primarily covers bitcoin, education, and urban issues.
His more memorable stories include a feature story on the secret, dangerous world of Venezuelan bitcoin mining; a documentary on how Robert Moses destroyed an all-black community on Manhattan’s Upper West Side that was featured in the New York Times; a report on Washington, D.C.’s taxi medallion system that got him arrested; a documentary about Brazil’s growing libertarian movement; and a re-reporting of the New York Times’ series about labor abuses in nail salons, which convinced the paper’s public editor to conclude that the paper’s coverage "went too far in generalizing about an entire industry."

His writing and videos have appeared in the New York Post, New York Daily News, The Daily Beast, PBS, Fox News, and other publications and outlets. Before coming to Reason, Epstein spent eight years as a producer at WNET, the PBS flagship station in New York City, where he won five New York Emmys and three CINE Golden Eagle Awards for his work.

Epstein graduated from Wesleyan University, where he earned a B.A. in American history and wrote a thesis on nineteenth-century transportation in New York City.

He lives in Brooklyn with his wife, Elizabeth, and their two sons, Nat and Harry.