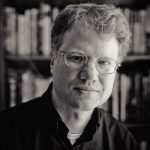 Jesse Walker is books editor of Reason magazine. He has written on topics ranging from pirate radio to copyright law to political paranoia, and he is author of the books Rebels on the Air: An Alternative History of Radio in America (New York University Press, 2001) and The United States of Paranoia: A Conspiracy Theory (HarperCollins, 2013).

Walker's articles have appeared in The New York Times, The Wall Street Journal, The Washington Post, the Los Angeles Times, The Baltimore Sun, The Boston Globe, Time, The Week, CNN.com, Slate, Salon, L.A. Weekly, New York, The New Inquiry, The New Republic, The National Post, National Review, No Depression, Boing Boing, io9, Radio World, Telos, Z, the Journal of American Studies, and many other publications. He has also worked as a DJ, a dishwasher, and a miscellaneous office grunt, and was once hired to help move a clandestine dog farm.

Walker is a graduate of the University of Michigan, where he received a degree in history. His personal blog is The Perpetual Three-Dot Column.

Walker lives in Baltimore with his wife and two daughters.

Walker's complete archive can be found here at Reason.com.