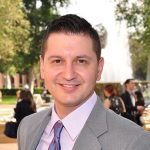 Director, Center for the Study of Ideological Diversity

Hovannes Abramyan, Ph.D., is Director of the Center for the Study of Ideological Diversity at Reason Foundation, where he investigates the foundations of public opinion in American society through survey and experimental study.

Prior to joining Reason, Hovannes was a data scientist at a political consulting company in Washington, D.C., and a policy fellow at the Pacific Research Institute in San Francisco. Hovannes is author of several studies, and has had commentary published in many outlets, including the Wall Street Journal, Forbes, and Investor's Business Daily.