Well, perhaps this is a not so happy labor day graph.

Want to know one reason why the jobs market isn’t coming back? This is far from the only reason, but look at this trend manufacturing—an industry employing millions of people. Not only are there 2.2 million fewer manufacturing workers today then there were in 2007 prior to the recession, but we’ve been on a long-term trend downward in manufacturing. The kicker is that at the same time output has been growing. The solution to this, by the way, is not to force American companies to “bring back” workers from overseas. This fall in manufacturing employment is not so much an outsourcing caused event as much as an automation and efficiency caused event. As it turns out, manufacturing jobs are disappearing all over the world. David Henderson notes:

It is also worth noting that pretty much every major OECD manufacturing nation has seen declines over the past decades, as noted in the below chart (via Scott Lincicome): 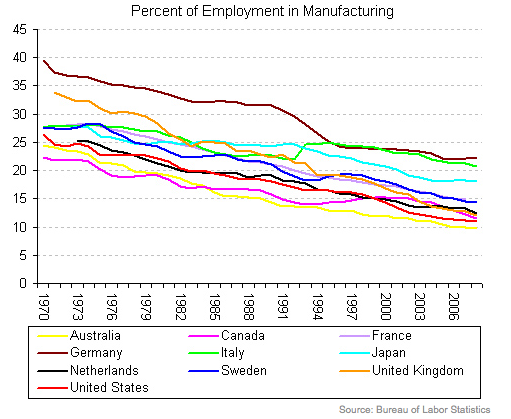 In conclusion, consider this “Macroeconomic Puzzle” from Arnold Kling:

Explain why, with unemployment over 9 percent, there has emerged the phenomenon of self-service frozen yogurt shops.

I’m heading out to Yogi Castle to ponder that.