The National Center for Education Statistics just published a report on the federal government’s largest K-12 education program: Title I. First implemented in 1965, Title I has always been intended to provide additional supports for low-income schoolchildren across the nation. In Fiscal Year 2015, the year on which the new analysis is based, Title I was a $14.3 billion program divided among four major grants. In the 54 years since its inception, the program has grown substantially and developed a dizzyingly complex funding mechanism that poses serious equity concerns for America’s poor children.

The report, commissioned explicitly by a 2015 federal statute, provides data-backed insights as to how Title I’s complicated, antiquated formulas are dispersing dollars to school districts and analyzes how various changes to the existing formulas would distribute dollars differently. The report reveals that nearly every formula feature has the effect of funding poor students differently based on where they live — and that even removing all of those provisions doesn’t go far enough toward treating all poor students equally. There’s no way around it: Title I needs a complete overhaul.

The fundamental problem with Title I is that its formulas try to resolve seemingly unanswerable questions about how competing priorities should be weighed. How much more of a need exists in areas with high concentrations of poverty, and how should those needs be balanced with those of poor students in wealthier districts? How should the needs of districts with high numbers of poverty be balanced with those of districts with high percentages of poverty? Definitive answers are embedded in the Title I formulas themselves — but it’s far from clear that they’re the right ones.

Because of the complex interactions between formula features, no incremental formula change would unilaterally increase equity. For instance, one section in Chapter 3 of the report found that removing a combination of provisions that seem to unfairly favor wealthier states, small states and districts with high raw numbers of poverty had the overall effect of reducing the variation of funding per Title I child across states and across districts of varying sizes and in different locales. However, it also increased the variation in how Title I dollars are distributed to each poor child in districts based on his or her district’s overall level of poverty. 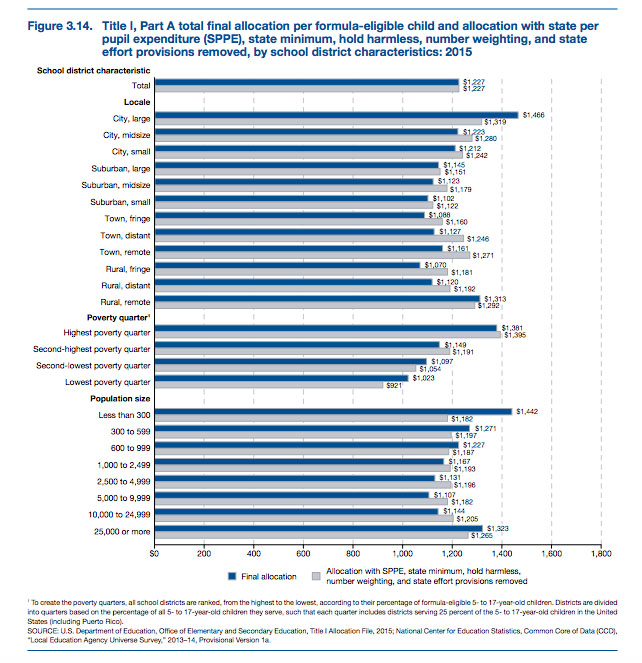 The Title I formulas also try to resolve difficult logistical questions: How quickly can districts be expected to adjust to changes in funding from year to year? What if small-population states don’t receive enough to truly make a difference at the school level? According to NCES’s 230-page report, the two formula features that address these questions are the most consequential in how they affect funding distributions — and those effects are almost always counterproductive to student-level equity. The “hold harmless” provision limits the number of dollars a district can lose from year to year, which in turn shortchanges districts that are eligible for more than they receive. Similarly, the “small-state minimum” provision ensures that each state receives some minimum portion of the total Title I pot, which again shortchanges other states that are eligible for more than they receive.

Repeatedly, the report finds that removing any of these, either individually or in combination, often reduces the variation in funding per Title I child across districts in different states, of different sizes, in different locales and different poverty levels. While this means that simplifying the formulas would be a meaningful step toward funding all poor students more equally, the change still wouldn’t be sufficient, because the eligibility criteria for the four grants, which contain their own questionable assumptions for which types of districts do and don’t qualify for additional funds, would remain intact. It would be easier to start from scratch.

As policymakers have pursued a form of equity that tries to compensate for an ever-growing tent of variables — state spending levels and patterns, state size, district size and complex measures of poverty concentration — they have forgotten the most important thing: student-level equity. The shortcomings of Title I illustrate the never-ending complications that stem from funding a school system over individual students. Policymakers should recognize that they are at a dead end and overhaul Title I, narrowing the focus of the program to funding all poor students equally, regardless of surrounding circumstances that are out of their control.

This article originally appeared at The 74 Million.