This weekend, the National Association for the Advancement of Colored People called for a ban on the very schools that have provided some of the greatest opportunities for African American students. On Saturday during their annual meeting in Cincinnati, the NAACP’s national board ratified a proposal introduced by members this summer calling for a ban on new charter schools. The anti-charter proposal, which had the support of over 50 activist organizations, including Black Lives Matter, cited concerns over heavy-handed discipline and segregation they argued that charter schools promoted.

While the grievances aren’t unfounded, it’s important to remember that traditional public school districts have themselves exacerbated for decades the very issues that opponents place at charter schools’ feet. School districts overwhelmingly use residential assignment to determine enrollment, which forces families to send kids to schools near their local zip code. If a traditional public school is failing its students, the only families that can access better options are those wealthy enough to move near better schools or to afford private school tuition. In many places, this overwhelmingly means white families. A recent ReasonTV video shed light on the racial tensions mandatory attendance lines can foster and how charter schools can integrate families through the shared bonds of voluntary choice. Charters aren’t perfect, but unlike traditional public schools, poorly performing ones close much more easily because they are directly accountable to parents who can enroll their kids (and their kids’ funding) elsewhere at any time.

On the whole, charters have been particularly effective at serving black students, a group historically left behind by traditional public schools. A meta-analysis of four different studies revealed that black students in charter schools scored 4.5 percentage points better than their district peers in English and 2.6 points better in math. As the city with the greatest charter school expansion in the country and an overwhelmingly black student population, New Orleans’ example for black students is also worth noting. After hurricane Katrina, the city converted to an all charter district. In 2004, a year before the storm, the city’s state assessment proficiency rate for black students languished at a dismal 28%. By 2014, black students’ proficiency more than doubled to 59%, surpassing their peers statewide by 2012. A 2013 study by Stanford’s Center for Research on Educational Outcomes found that students in New Orleans charters gained the equivalent of an average of 86 and 101 days of learning in reading and math respectively compared to their peers in traditional public schools. The NAACP ignores this data about those it purports to help at its own peril. 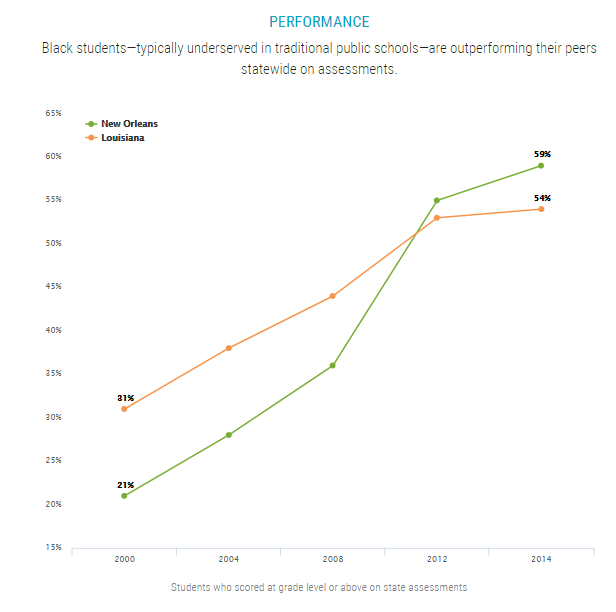 Black pro-charter civil rights leaders and families have been quick to point out that the NAACP doesn’t speak for them. In September, over 160 black education and community leaders signed a letter to the NAACP calling on it to reconsider the charter moratorium proposal. Jacqueline Cooper, President of the Black Alliance for Educational Options, issued a statement expressing her frustration with the NAACP’s decision. “Banning new charter schools will only widen the achievement gap for Black children by reducing the number of high-quality options available and increasing the number of names on existing waiting lists. Low-income and working-class Black families deserve more choice, not less.”

If the NAACP wants to expand opportunities for black students, it should listen to more of its own supporters and the story of black achievement the data tell about charter schools.