With most of the country under government-imposed stay-at-home orders intended to limit the spread of the COVID-19 pandemic, a recession is looking increasingly inevitable at this point.

Prolonged shutdowns of large parts of the economy, nationwide and across the world, are having major impacts already—with 17 million Americans filing for unemployment in the previous three weeks. There are likely to be ongoing and harsh effects on every aspect of American life, even when circumstances return to something resembling normal, particularly on government budgets. And since K-12 education is usually the single largest function of state and local governments, policymakers need to closely consider how students will be affected in the coming years.

State and local leaders should learn from past mistakes and make school finance reforms to ensure that low-income and disadvantaged students aren’t disproportionately harmed, both now and in future recessions.

It’s first important to highlight that over the last three decades, states have made real strides in improving the equity of their school finance systems. After years of gross disparities in funding between high- and low-poverty school districts and between school districts of varying property wealth, the 1990s saw a new era of legislation adopting better school funding formulas at the state level.

Often driven by funding lawsuits and new political pressures, these reforms provided a better framework to ensure that high-poverty school districts and districts with low property wealth get a fairer share of education resources.

However, state education finance systems still have a long way to go. Current funding mechanisms still allow inequities to persist and grow, mainly because they fail to fully equalize for the disparities in local resources schools may receive. They also continue to allocate resources that come with rigid restrictions on their use, which can diminish the effectiveness of education funding.

Moreover, because many recent state-level reforms involved an increased reliance on state revenues, which tend to be more sensitive to business cycles, recent recessions have undermined these equity gains by disproportionately harming vulnerable students. But it doesn’t have to unfold that way this time around.

Lessons From Past Recessions

Over the last half-century, inflation-adjusted spending on K-12 education has more than tripled. During the economic recessions of 1990 and 2001, education revenues nationwide stagnated for a few years, but then continued to tick upward. However, the Great Recession of 2008 was different. Not only were state education funding systems structured differently at this point, but the seriousness of the 2008 downturn led to substantial, sudden decreases in state and local education revenues of around five percent overall.

Although these funding levels were eventually restored in most states, many policy mistakes were made in the interim. While the magnitude of the coming recession is uncertain, it’s very possible that it could be as bad, or even worse than, the Great Recession. Therefore, it’s important that legislators critically examine how they responded during this period.

States also didn’t make cuts to their education budgets with funding fairness in mind. While many states have a main education funding formula that aims to equalize for differences in local resources, they also fund schools outside of their main formula with grant programs that often provide the same amount of per-pupil state resources to each district, regardless of their existing local resources. But during the Great Recession, states too often prioritized making cuts to their equalized funding formulas, rather than collapsing non-equalized grants into those formulas. This is another primary reason for the growth in spending gaps between low and high-poverty districts.

Not Just a Recession Problem

Another working paper, this one published in 2014 by scholars from the University of Notre Dame and the University of Maryland (UMD), took an in-depth look at how the Great Recession affected public education funding writ-large and how those effects were spread between districts and states. These researchers concurrently found that funding inequities increased during the Great Recession.

However, they were hesitant to attribute rising disparities to the recession, instead emphasizing that funding inequality had already been rising at a comparable rate beginning in the year 2000. In fact, they found that rising funding gaps over the 2000s largely erased equity gains of the previous 30 years.

In data they examined for Washington state and Virginia, the researchers highlighted a key factor that helps to explain why funding gaps between districts have been growing nationwide. Here’s how they put it in their report:

The results for these two states suggest that there is an asymmetric response in tax rates to changing assessed values. When property values are increasing the tax rate falls but not so much that revenues decline. In contrast, when property values are falling, millage rates can be increased to more than offset the decline in values.

Essentially, they found that many school districts can partially offset losses in state revenues by large increases in local revenues. But as the rise in overall spending inequality demonstrates, not all districts can do this—despite their best efforts. Similar to what Knight found in his 2017 paper, I’ve also highlighted how lower-wealth school districts in Arizona tend to tax at higher local rates but still receive less education revenues overall. 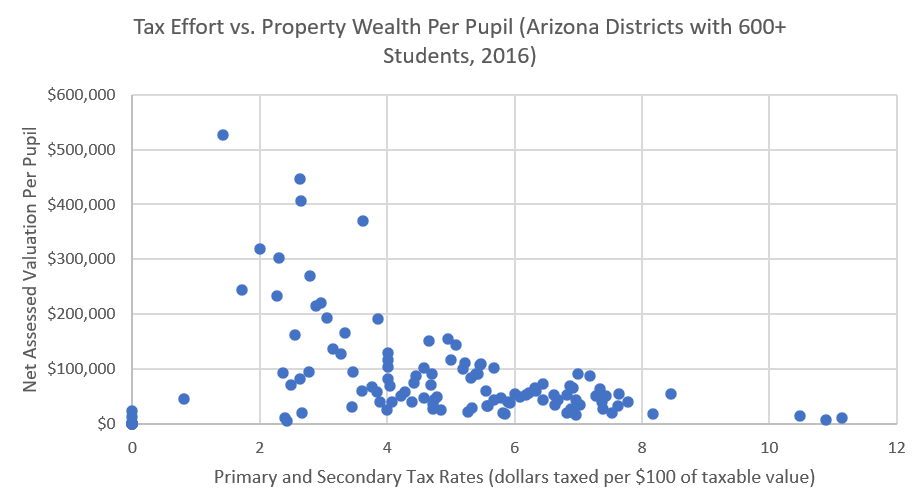 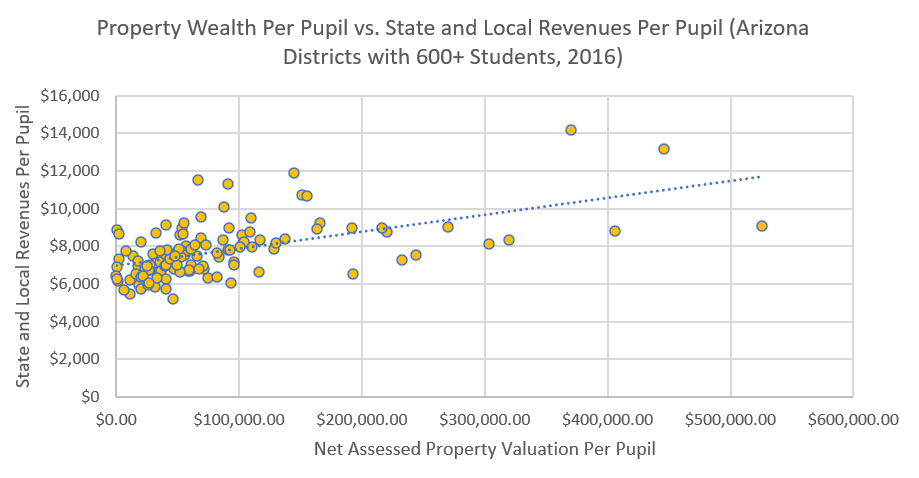 Funding inequities, while they may be exacerbated by a recession, are a deeper problem that states haven’t fully addressed. In contrast to state aid, local property taxes can be more easily leveraged to raise additional funds. During budget squeezes, school districts that have access to more local wealth have an easier time adjusting because they can raise more funds at lower rates.

In their conclusion, the Notre Dame and UMD researchers added:

An important question we do not address is whether it is possible to have a more redistributive state system of support that does not subject districts to these large systemic shocks. Given that states will continue to rely on income and sales taxes, these goals seem incompatible.

This is a striking point: School districts that are more reliant on state aid are more vulnerable to business cycle shocks. And even when the economy is strong, despite state efforts to equalize funding between districts with targeted state aid, funding inequities can persist and grow so long as richer school districts are able to leverage their local wealth.

Getting It Right This Time

During the next recession, policymakers need to prioritize retaining and bolstering programs that advance funding equity.

“States should first look to the aid that goes to the districts with the least need,” Rutgers University education professor Bruce Baker recently told Chalkbeat.

That means re-examining funding streams that aren’t for disadvantaged students and that over-subsidize wealthier school districts.

The first area to explore is the non-equalized state grants that are outside of their main formulas. Arkansas, for instance, funnels over $500 million annually—around 10 percent of its total education budget—through four state grant programs for low-income students, professional development, English language learners, and alternative learning environment programs. While these programs have laudable goals, they aren’t incorporated in Arkansas’ equalized formula. Therefore, the state is over-subsidizing some districts that are already receiving higher revenues. These programs should instead be incorporated into the formula so that the burden for funding these programs can be more equitably shared between state and local resources.

The second area for states to examine is how they leverage local property wealth. One way to control funding gaps is to place caps on excess local revenue, a practice employed in Arizona. But a more fundamental reform would be to adopt a statewide property tax, like that utilized in Vermont. Because local property taxes are typically exclusive to the school districts that use them, they contribute to funding gaps that also lead to tax rate disparities.

A statewide property tax can negate disparities in local tax burdens and allow for a more fair allocation of education resources. Moreover, it prevents vulnerable school districts from being disproportionately hit by state revenue crunches because it leverages the resilience of property taxes for the benefit of all students, not just those in wealthy areas.

Finally, as legislators look to streamline education funding for the sake of equity, it’s also important that they do away with old funding restrictions. Likewise, school district administrators should also focus on giving more autonomy to school principals in allowing them to make their own decisions about staffing arrangements and academic programs. It’s very difficult for state policymakers and school districts’ central office staff to account for differences in local needs at individual schools—particularly at a time when they are shifting resources around and cutting their budgets. Instead, local leaders are better situated to know what kinds of programs and staff will help their students succeed.

School finance reforms should be made to ensure any revenue losses, tax burdens, and future economic shocks can be spread fairly across school districts and students. It’s up to policymakers to make certain that the COVID-19 pandemic and seemingly-impending recession don’t disproportionately hurt disadvantaged students.