USA Today offers a preview of things to come if we don’t get serious about tackling out-of-control entitlement spending: 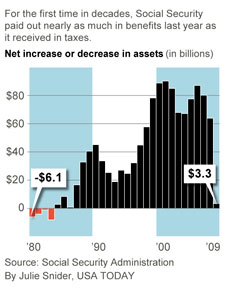 Social Security’s annual surplus nearly evaporated in 2009 for the first time in 25 years as the recession led hundreds of thousands of workers to retire or claim disability.

The impact of the recession is likely to hit the giant retirement system even harder this year and next. The Congressional Budget Office had projected it would operate in the red in 2010 and 2011, but a deeper economic slump could make those losses larger than anticipated. […]

Experts say the trend points to a more basic problem for Social Security: looming retirements by Baby Boomers will create annual losses beginning in 2016 or 2017.

“The moment of truth has arrived,” says Rep. Paul Ryan, R-Wis., top Republican on the House Budget Committee. “This is a wake-up call.” […]

Social Security was saved from bankruptcy in 1983 by a bipartisan deal that increased payroll taxes, taxed some benefits and gradually raised the retirement age to 67. That was supposed to keep the system solvent at least until 2058, but the projection has slipped to 2037.

The problem is gargantuan. According to the GAO’s fall 2009 long-term fiscal outlook, we’re facing $62 trillion in unfunded liabilities ahead of us over the next several decades. By 2040, if nothing changes, the entire federal budget will be consumed by Medicare, Medicaid, Social Security and debt service. Just forget about defense or anything else.

The following GAO chart paints a bleak picture regarding the next three decades of Social Security and Medicare:

Commenting on our entitlement albatross, GAO echoes many other canaries in the fiscal coalmine in concluding that: “The longer action to deal with the nation’s long-term fiscal outlook is delayed, the larger the changes will need to be, increasing the likelihood that they will be disruptive and destabilizing.”