The U.S. is at the height of the new Space Age. The year 2020 saw more space launches than ever before. Private investment is charting new paths and launch providers like Blue Origin and Virgin Galactic carry much of the responsibility to meet the demands of commercial and civil space needs. However, to support these launch providers the Federal Aviation Administration (FAA) must define strategies to improve the quality of, and expand the number of, launch sites and spaceports.

Launch sites and spaceports provide the launch pads and runways that are part of the foundation of space travel. Without the proper security, technology and working equipment at these facilities, space travel would not be possible.

Currently, 19 U.S. launch sites are licensed to host, or have hosted, commercial space launches since 2015. Twelve of these 19 sites have an FAA site operator license and are known as spaceports. As of August 2020, nine additional entities were seeking licenses for 11 prospective launch sites.

While facilities may support current demand, the FAA’s Office of Commercial Space Transportation needs to better address future needs, looking at what infrastructure needs will be in the future. 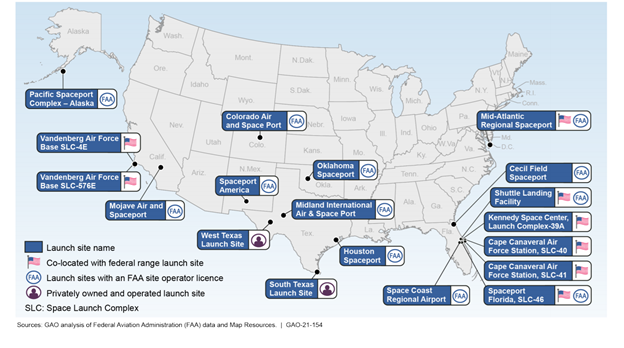 The FAA’s Office of Commercial Space Transportation (AST) had a very busy 2020 as it worked towards reviewing and finalizing rules for streamlined launch and reentry under the White House Space Policy Directive 2 (SPD-2), which was created to support the growth of the commercial space sector, remove barriers that licensing issues created, and to, overall, make launch easier on launch providers.

These streamlined launch and reentry rules could increase demand for launches. Add in the growing number of commercial space companies developing new launch vehicles, as well as more international and domestic businesses looking to launch payloads into orbit, and you can see how launch demand is expected to increase substantially in the next few years.

To truly support the increased needs of public and private launch providers, the FAA must take stock of the working infrastructure currently provided at spaceports and launch sites.

Congress has instructed the FAA to provide a report every two years through December 2024, with recommendations on how to better facilitate and promote private investment in space transportation infrastructure.

These reviews aim to promote space transportation growth in general, but particularly seek to address the increased demands of commercial launch.

In the draft of its current report, the FAA only focuses on options to address these issues that involve two of the FAA’s existing programs: the Space Transportation Infrastructure Matching (STIM) and Airport Improvement Program (AIP). The FAA decided to take this approach due to limited time and resources, and the belief that changes would be more quickly implemented through these avenues, which it already has administrative authority over.

However, by only directing efforts towards these two existing programs, the FAA limits its scope of analysis and precludes needed improvement in other areas.

The federally funded STIM program was used for spaceports and infrastructure-led projects during the fiscal years 2010-to-2012. It is preferred over AIP because it is authorized to support spaceports. However, the funds they distribute are only eligible for public agencies. This funding stream could create 12 eligible spaceports, but no funding would be supplied for private spaceports. This would target some infrastructure problems, but is only one extremely limited option.

The FAA also proposed expanding the Airport Improvement Program’s funding to include commercial space infrastructure. While AIP currently supports some airports where increased funds could aid some space operations (e.g. runways), the FAA would like to expand AIP statutory authority to include funding for exclusive space operations as well.

A recent Government Accountability Office report, “FAA Should Examine a Range of Options to Support U.S. Launch Infrastructure,” suggests that only looking at these two programs is not enough. The report argues that this approach closes off the FAA from finding potential cost-efficiencies and unnecessary substitution of state,
local, and private sector investment with federal investment.”

While new spaceports may be great for future technologies, some of the current spaceports are not currently being utilized for launch. For instance, out of the 12 spaceports available, seven have not hosted any FAA-licensed launch since 2015, due to a range of issues like the population size near the launch zones, geographic location, or the type of infrastructure available at the site does not suit a company’s launch needs.

For existing spaceports that are being heavily used, like those on the coast and in uninhabited areas, some argue that the FAA should spend more time working with the private sector to expand this infrastructure. While the FAA has agreed to take the recommendation by the GAO to better look at the priority of launch site licenses, it should continue to work with those in the private space industry to better understand their needs and how best to partner with them.

Regarding infrastructure, the GAO report shows how funding for space launches has changed from mostly public to public-private. Many private companies have made significant monetary and developmental changes to existing launch sites to fit their operational needs. For example, SpaceX practically rebuilt the launch pad at Launch Complex 39A at NASA’s Kennedy Space Center in Cape Canaveral to accommodate its Falcon 9 launch. Companies negotiate with spaceports to develop further infrastructure to meet their launch needs. Spaceport America in New Mexico has invested with Virgin Galactic to create better launch pads for future space tourism operations and used FAA grants for environmental concerns and for the infrastructure itself.

Private funding saves the taxpayers and FAA money and such partnerships should be encouraged. Since private companies are customizing launch pads, the FAA should prioritize streamlining and approving safety measures that can encourage more of this privately-funded activity.

If the FAA does decide to it needs to federally fund some launch sites and spaceports, the GAO report notes that today’s launch providers need specific alterations that could speed along their launch developments. For example, FAA could fund minor modifications including better internet, fuel facilities, and roads within the launch sites. Such basic infrastructure projects would make launches much easier and more efficient for all customers, plus would come at a minimal cost to taxpayers compared to other aspects of space launches.

To best support spaceports that are not hosting launches at the moment, the FAA should focus its efforts on working with private space companies to better understand the technologies they are developing. The FAA could help current spaceports adapt to the different types of launches as they’re moving forward and making new technological developments, for example.

The difference between the popular vertical launch that needs a classic launchpad compared to a more horizontal launch, like Virgin Galactic’s, which resembles more of a runway, is significant. Additionally, the materials and creation of launchpad infrastructure can differ depending on the weight of the payloads and type of rocket,  shifting structural considerations of launch zones at spaceports. Ideally, the private companies would be funding these facilities. But, if FAA decides it must be involved, it should avoid picking winners and work closely with many companies to ensure taxpayers’ money is being spent in ways that can provide long-term infrastructure to the widest variety of launches and companies.

Some are hoping the FAA will expand its vision regarding commercial space infrastructure. The FAA and NASA recently signed a memorandum of understanding (MOU) expanding funding and support for space transportation infrastructure. The MOU focuses on infrastructure for both government and non-government cargo and payloads for orbital and suborbital space missions. This memorandum pairs with FAA and NASA’s partnership regarding the long-distance commercial point-to-point suborbital flight. Funding from the MOU will also be allocated to selected spaceports and launch sites to support this new form of space travel and is a step in the right direction for the FAA’s support of commercial space.

As the commercial space industry continues to grow and proves to be the future of space exploration, the FAA should seek to minimize its role and move beyond the outdated government funding model for space. It should aim to prioritize its oversight role and empower the private sector in ways detailed in the Reason Foundation study, “The Economics of Space: An Industry Ready to Launch”:

We argue for shifting to an approach based on our current reality of new private launch capability at a fraction of the cost of government procurement, whereby government invests in infrastructure and allows the private sector to innovate to develop efficient transportation and financially sustainable use of space resources.

The private space industry is full of opportunities for innovation and growth, the federal government should remove its regulatory obstacles to those developments.