Advocates of marijuana legalization have argued their case for decades based on a few intended outcomes. Namely, advocates have argued that marijuana legalization should curtail the black market and the violence that black markets engender because its participants have no recourse to the legal system to settle disputes and therefore resort to violence to enforce their claims. Further, by freeing up law enforcement resources from the pursuit of trivial marijuana possession charges, law enforcement could focus its efforts on more serious crimes.

Early statistics on the effects of legalization in a handful of U.S. states at least indicate that there have been no increases in crime associated with legalization and that crime rates have continued their 20-year decline in those states. Marijuana legalization within the U.S. has also led to a significant reduction in drug smuggling across the U.S.-Mexico border over the past several years.

Other claims of legalization advocates involve the regulation of an industry that could not be regulated while it was illicit. As such, marijuana consumers would not need to fear the possibility of receiving dangerous adulterated products because legal marijuana is generally required to be tested by an independent testing lab and to display those lab results on the packaging.

Second, regulations that restrict access to legal marijuana products in ways similar to existing alcohol laws would limit the availability of marijuana products to underage users, whereas black-market suppliers previously made no age-based distinction among customers. As data continues to accumulate, it certainly appears this claim was correct. Although marijuana for recreational use has become legal in only 11 states, national surveys on drug use indicate an overall decline in teen use over the past several years.

According to data from the Substance Abuse and Mental Health Services Administration (SAMHSA), a division of the U.S. Department of Health and Human Services, marijuana use among survey respondents aged 12 to 17 reached a recent high in 2011, the year prior to legalization in the first states to do so—Colorado and Washington.

The SAMHSA data indicate the percentage of persons by age category who have tried marijuana at any point in the last year.  For 2011, that percentage for teens using cannabis was 14.2 percent.  The previous high of 15.8 percent, in 2002, declined steadily throughout the ensuing decade before spiking again in the early part of this decade.  However, teen marijuana use rates have declined throughout the period of marijuana legalization by the 11 states to have already done so, falling from 14.2 percent to 12.5 percent in the newly released data for 2018.

This decrease in teen marijuana use occurred at a time when use rates for adult age groups has increased significantly. Over the same time period, young adults (those aged 18 to 25)—always the heaviest user group—have increased their marijuana usage rate over the past year from 30.8 percent to 34.8 percent. Likewise, those aged 26 and higher have nearly doubled their past-year usage, going from 7.9 percent to 13.3 percent. While these figures indicate that adults may be attracted to the legal cannabis market, they simultaneously provide support for the notion that legal markets are more capable of excluding teen consumption than illegal markets. 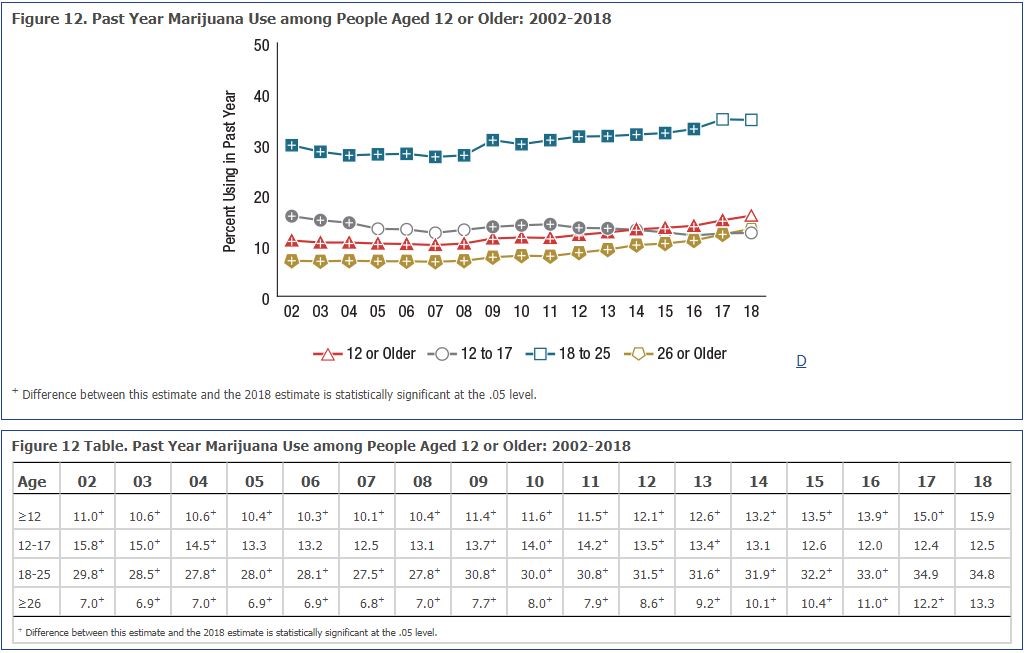 It’s worth noting that survey data is an imperfect measurement tool, particularly when discussing participation in illicit activities. Survey respondents have a tendency to underreport their participation in illegal activities.  Nonetheless, this bias among respondents should be constant over time, such that this bias can be largely ignored when examining statistically significant changes in usage rates over time. If anything, the normalization and increased social acceptance of marijuana use that has accompanied legalization in states could’ve made survey respondents more willing to report their use in recent years. That makes the overall decline in teen use particularly noteworthy.

The newest survey data, for 2018, do indicate a small increase in teen use, from 12.4 to 12.5 percent, but this small change is within the survey’s margin of error and therefore should not properly be viewed as a year-over-year increase. Regardless, the long-term trend throughout the period of marijuana legalization is clear: adult marijuana use has increased while teen use has fallen.

This is exactly the result that advocates of marijuana legalization predicted.