A new Indeed.com study claims that high-tech work is concentrating heavily into just eight major metro areas. This, the author claims, is a troubling parallel to the polarizing forces of inequality we witness in incomes, housing, and politics in our country today – few gain much while many gain little. Unfortunately, this is analysis too short term, is faulty, and clouds the true impact of the technology industry on the American economy.

First, the author uses Standard Occupational Classification codes (SOC) 15-100 “computer occupations”, 11-3020 “computer and information systems managers” and 17-2060 “computer hardware engineers” to define “high-tech” jobs. This definition is too narrow and too computer focused to accurately encompass the “tech” industry. A 2004 BLS report, a subsequent 2005 review of that report, and 2012 report from the Bay Area Economic Council Institute (BAEC) all rely upon a more inclusive, complex, and more accurate labor analysis to identify technology oriented jobs. For example, the BLS definition includes many jobs that the Indeed definition does not; such as, aerospace engineers, civil engineers, animal scientists, epidemiologists, astronomers, and physicists. This is important because technology and its capabilities seem to affecting nearly every industry, not just the field of computer science and manufacturing.

Even those good with computers are working with experts in other fields to leverage technology to make companies which will transform health, manufacturing, services, housing, and pretty much everything in between. It is too narrow to only include those who work with computers as “high-tech.” Even if this metric did accurately capture tech, the author measures the concentration of tech jobs as a percentage of total jobs, presenting a measly 0.9% increase from 26.5% to 27.4% from 2013 to 2017 as evidence of tech hubs “tightening their grip” on the economic gains of the digital revolution. A more nuanced methodology and long term look at the data – which is employed in the BAEC study – reveals a dispersion of tech labor.

Second, the study is far too short term to make the conclusions that it does. As it only dates back to 2013, the author appears to assume that America’s major eight tech hubs have always existed before 2013. Using the NAICS tech jobs categorization method in the Bay Area study, a comparison of maps from 1991 to 2011 shows that some of these eight metro hubs – Seattle and Austin – didn’t even exist in 1991. Furthermore, moving beyond an ultimately arbitrary distinction of “eight” metro hubs, one can see highly increased levels of tech employment in the midwest and south (two regions generally considered to be “missing out” on tech growth.) Some other states like Kansas and Idaho now have entire tech labor markets in their states that had zero trace in 1991. 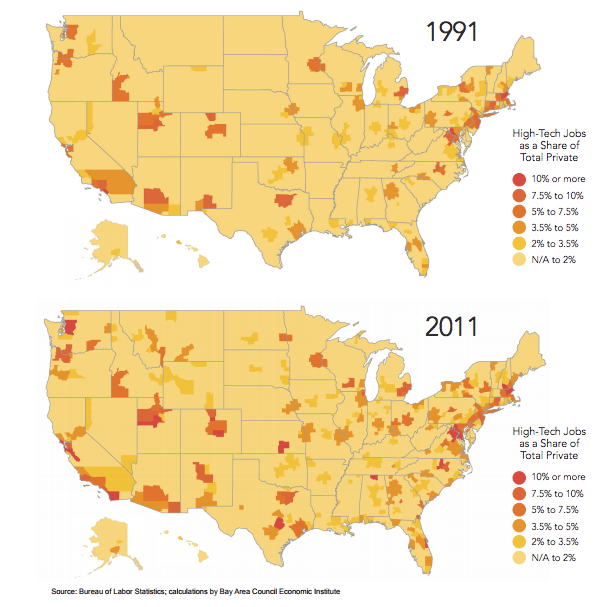 The author admits in the final paragraph that San Jose and the Bay Area, arguably the originators of the tech trend, “are seeing their share of tech jobs fall.” I argue that the mere existence of hubs like Seattle and Austin are proof that in the long run, tech is not “tightening its grip” but perhaps the opposite. In a timeline sense, we are too close to the birth of digital technology to declare that it is a force of inequality and polarization. As the history of inventions shows us, adoption generally starts slow and then accelerates at a rapid pace. Thus, it is reasonable to conclude that the tech inventions of the last 1, 5, 10, and 20 years will only continue to penetrate society and business for the next 25 years as they have done the last 25 years.

We shouldn’t be complaining that eight high tech areas, some of which didn’t even exist 20 years ago, are hiring tech workers at high salaries. In fact, when you consider the multiplier effect that tech jobs have because of their high salaries and tradeable nature of their products, the presence of these jobs creates more economic opportunity in the local community. Instead of continuing to rabble rouse about the riches that tech has created, policymakers and researchers should be looking for ways to help more folks share in the gains of tech. Some examples include creating an atmosphere of permissionless innovation, allowing gig workers and tech companies to negotiate employment without government burdens, and permitting more housing in metro areas.