Indianapolis’ 50-year lease of its downtown parking meter operation to a private concessionaire (ParkIndy, a Xerox-led venture) in 2010 is a model example of privatization done well, a public-private partnership that continues to bring dividends for the city and taxpayers. There’s more evidence today. According to a ParkIndy press release, the concessionaire will be rolling out hundreds of additional street sensors next week that interface with ParkIndy’s wayfinding iPhone/Android app to help guide commuters to open parking spots:

Monday, July 2, will become another noteworthy date in the transformation of the city’s parking system when an additional 811 sensors will be activated to identify vacant parking spaces at meters.

Coupled with 557 already operational sensors, this rollout will bring the total number of parking spaces served by sensors downtown and in Broad Ripple to 1,368. The sensors are embedded in the roadway in each parking space and detect the presence of a car. That information is communicated to motorists to help them more easily find parking.

“This move is another step toward providing Indianapolis the most advanced parking system in the United States,” said Adam Isen, program manager for ParkIndy, the organization modernizing metered parking in Indianapolis.

The app also provides information about parking space time limits, pricing, and meter paying options, including links to pay by phone using Parkmobile. A “Park Now” button allows the driver to note where his or her car is parked — and later find guidance back to the car if needed, set reminders, take a picture of a car, and add notes about the location.

So not only were Indianapolis officials able to transfer a non-core government enterprise to a private partner better equipped to operate it, and not only will the city benefit from $300-600 million in enhanced parking revenues over the next five decades, but it has also ensured that commuters will benefit from dramatically enhanced customer convenience via system modernization and technology deployments paid for and installed by the concessionaire. In short, the city and its commuters are getting a vastly better—cutting-edge, in many ways—parking system. Contrast this with the many cities that still have coin-based meters untethered to wayfinding and other technological innovations that make commuting easier and reduce urban traffic congestion.

But this isn’t all. I found out two more interesting developments this week from ParkIndy staff.

The first involves the deployment of credit card technology, a boon to parking customers. By the end of 2011, ParkIndy had ensured that all 3,650 metered parking spaces in Indianapolis could be paid by credit card, introducing a mix of credit card accepting technology via new single space meters, pay boxes, and pay by phone options. These days, credit cards are a far more convenient payment option for motorists who don’t have or use coins. And customers apparently like the improved convenience. In April 2011, credit cards accounted for 37% of the dollars collected at new meters in Indy. As of last month, however, the percentage of dollars paid by credit card ballooned to 63%. It will be interesting to see if this trend continues, but I would expect it would, given the rapid proliferation of mobile technologies and commuters’ growing awareness of ParkIndy’s apps and their powerful functionality. 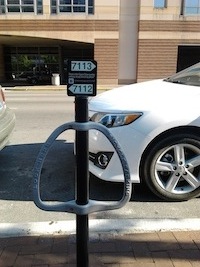 Second, when ParkIndy began installing pay boxes—centrally located meters covering many or all of the spaces within a given block, instead of the one-meter-per-space configuration—in the city last year, they were careful not to remove all of the existing single-space meter poles. In fact, they left more than half of them. Meter poles are very popular among bicyclists who use them to lock their bike to in a pinch. But ParkIndy has gone even further by donating 50 bike racks to INDYCOG, an Indianapolis nonprofit that promotes bicycle use and safety, and installing them this week on existing parking meter poles. Now, even if you’re not driving or parking, securing your bike in Indianapolis got even easier because of the parking concession.

I realize it’s still early in a 50-year deal, but it’s stories like these that reinforce my belief that this privatization seems to be a major win-win-win for the city, the concessionaire and commuters and should serve as a model for other cities seeking to modernize the operations of their parking assets. But don’t just take my word for it. For a view from the city’s perspective, see my brand new Innovators in Action interview with Michael Huber, Indianapolis’ Deputy Mayor for Economic Development, posted earlier today.