A recent editorial by the Idaho Statesman editorial board bemoans recent legislative efforts to advance school choice in the state. The piece advocates that instead of expanding educational opportunities, legislators should devote more tax revenue to the public education budget. The editorial board goes on to cite the fact that Idaho ranks last in the nation in per-pupil education spending, according to a 2020 report from the National Education Association (NEA).

But while state education spending certainly has some impact on student achievement, simplistic rankings of state K-12 education funding like those published annually by the NEA don’t give the full picture.

Other important factors that play into student achievement include how funds are spent, how revenues are allocated between districts, and whether local leaders have the flexibility to customize spending and maximize the use of every education dollar.

First, many states fairing poorly in per-pupil spending rankings published by the NEA and other news outlets are states that often have fewer taxable resources than their higher-ranking peers. For example—to achieve comparable spending levels, lower wealth Mississippi would have to tax much more aggressively than wealthy Massachusetts. Unsurprisingly, low-spending Idaho also ranks third from last among all states in average annual income according to Rasmussen University, after adjusting for regional cost of living. National rankings of per-pupil K-12 spending routinely favor states in the northeast and on the coasts—not necessarily because they have more generous taxpayers but often because they are wealthier.

It is also important to ask how—if Idaho decided to substantially expand its education budget—would dollars be used to improve student performance? While some in the state have urged for class size reductions as a key need for the education system, ample research has demonstrated that shrinking class sizes actually have little to no benefits for student achievement. Perhaps more spending on support staff will make a difference for Idaho students? Again, massive investments nationwide in additional support staff over the last few decades have yielded little improvement in student performance. 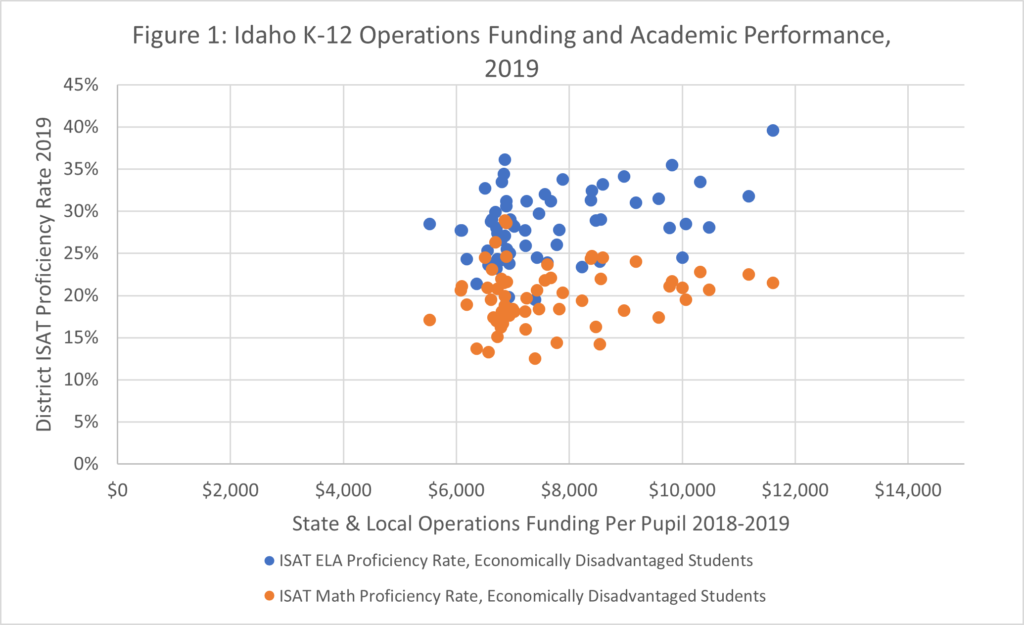 To be clear, the level of resources devoted to a state’s public education system is an important factor for student success. However, another important factor is how dollars are allocated and spent. As our team’s research highlights, the state has an inequitable and inflexible funding system that favors districts with more experienced staff and rigidly determines staffing patterns. In fact, we found that about two-thirds of Idaho’s education dollars come with strings attached and less than 3 percent are allocated based on students and their individual educational needs. This minimizes the extent to which education dollars can be used productively because it leaves local leaders—those closest to the students—with little decision-making power.

If Idaho policymakers boost K-12 spending without addressing underlying issues in the state’s school funding mechanisms, there is no guarantee that the extra dollars will yield significant student achievement benefits.  Policymakers would be wise to focus on fixing the state’s antiquated formula before considering allocating additional funding.