there has been some meaningful repair to banking system’s balance sheet and that is more than can be said for the household balance sheet. This can be seen by examining the flow of funds data for the households, specially household net worth (i.e. household assets minus household liabilities). The figure below graphs this series as a percent of disposable income (click on figure to enlarge): 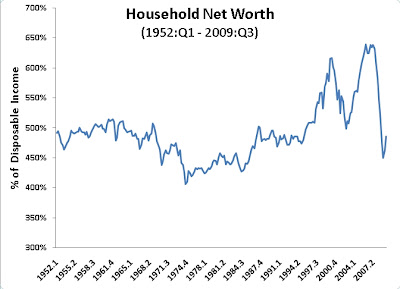 The question, as is frequently asked these days, is what to do about this. Beckworth has some ideas, which you can see here. What will be interesting to see is how this change in household net worth impacts lifestyle choices over the next five to fifteen years, and what it means for the perspective of wealth that children who grow up during that time develop.