New data released today shows that the U.S. GDP only contracted 1% in the second quarter of 2009. Considering the first quarter the economy recessed 6.4%, that is very good news. And it beat expectations from the various “economists surveyed” who expected a 1.5% shrink of the economy. This is, unfortunately, the first time that the economy has contracted for four straight quarters since the Great Depression. With that in mind it probably is fair to say that it is no longer hyperbole to claim this recession is the worst economic period since the 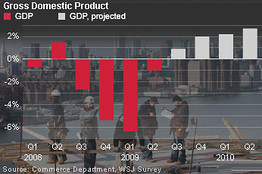 1930s. But “experts” are predicting that the GDP should bounce back to positive growth in the third quarter, which would mean that right now, as we sit, read, and type, the recession is headed towards recovery.

In addition, jobless claims dropped for the first time last week to 570,000. A positive sign, but by no means a large reduction.

(Chart is from The Wall Street Journal)