The Environmental Protection Agency (EPA) has proposed a new set of rules that would set limits on carbon dioxide emissions from electrical power generators. The EPA wants each state, within roughly a year, to develop plans (including legislation and regulations) that would achieve specific emission reductions. If the agency approves them, each state would then have to implement those plans, resulting in various new restrictions on electric utilities and the public. The EPA held a series of hearings on the proposed rules and accepted public comments. Among the comments received by the EPA were many opposing the rules for legal and technical reasons. One damning argument came from Laurence Tribe, a professor of constitutional law at Harvard Law School who followed his comment with an editorial in The Wall Street Journal:

Even more fundamentally, the EPA like every administrative agency, is constitutionally forbidden to exercise powers Congress never delegated to it in the first place. The brute fact is that the Obama administration failed to get climate legislation through Congress. Yet the EPA is acting as though it has the legislative authority anyway to re-engineer the nation’s electric generating system and power grid. It does not.

The EPA acknowledges that the Clean Air Act “appears by its terms to preclude” its proposal. That is an understatement. And the problem can’t be dismissed as a quirk in the statute. The language at issue has been a feature of the Clean Air Act for decades. That’s why, in 2008 (New Jersey v. EPA), the D.C. Circuit struck down a far less ambitious EPA rule under exactly the same statutory constraint involved here. Today the agency is again circumventing the checks Congress deliberately built into the Clean Air Act and distorting it to justify a wide-ranging carbon rule in a way Congress never intended or authorized.

The EPA has responded to Tribe’s WSJ piece with a letter to the editor by Chief Counsel Eva Garbow. Ms. Garbow claims the EPA has given the states choice, through a variety of ‘building blocks’ that give states flexibility in how to comply with the rule’s emission limits.

In developing its proposal, the EPA has conducted unprecedented outreach with states and as a result of what we learned, our proposal sets up a national framework that gives states the power to chart their own customized path to meet the carbon-dioxide emissions targets proposed for each state. Among the many approaches states can take, cutting energy waste and leveraging cleaner energy sources-which many states and utilities are already doing-can play leading roles in meeting the targets. By 2030 our proposal will result in 30% less carbon pollution from the power sector across the U.S. when compared with 2005 levels.

EPA’s response sounds like “Sophie’s Choice”: states must effectively choose between two or more outcomes, all of them unacceptable. And does not address the Constitutional issue raised by Mr. Tribe.

In addition to its questionable legality, the proposed rule would disproportionally harm already disadvantaged communities. Writing in the Washington Times, Deneen Borelli notes the regressive nature of the proposed rule.

The sad truth is Mr. Obama’s agenda includes policies that preferentially harm blacks. In particular, Mr. Obama’s climate change policy, in effect, serves as a 21st-century version of Jim Crow laws owing to its economic impact on black households. A study from the Pacific Research Institute on the impact of the Environmental Protection Agency’s proposed regulations on existing power plants demonstrates the harm Mr. Obama’s climate change regulations could cause black families in Ohio.

The same holds true for each and every other state, as Reason Foundation stated in comments we filed with EPA, although the exact magnitude would vary. We also noted the proposed rule violated EPA’s own programs on environmental justice:

We find that, if implemented, the CPP is likely to increase substantially the amount Americans pay for electricity, negatively and significantly impact the reliability of the electrical service they receive, provide less benefit than estimated by the EPA in its RIA, and disproportionately harm disadvantaged communities.

According to a study released by Energy Ventures Analysis, the typical household’s annual electricity and natural gas bills would increase by $680, or 35%, between 2012 and 2020 as a result of the CPP and various other existing and proposed EPA regulations; costs would escalate each year thereafter. The cost of electricity would increase most in states that have implemented deregulation of wholesale electric power markets (where the price of electricity will rise to the marginal cost to support new generating capacity). The study estimated a cumulative $177 billion increase in electricity costs and a $107 billion increase in natural gas costs in 2020 compared with 2012.

More important than the total cost of the CPP is its distributional impact. It is well established that lower-income customers spend a larger percentage of after-tax income on energy than higher income customers. According to Bureau of Labor Statistics data, a household earning less than $10,000 (pre tax) spends 14% of its income on energy utilities, while a household earning over $70,000 spends just 2% of its income, as shown in Figure 1. 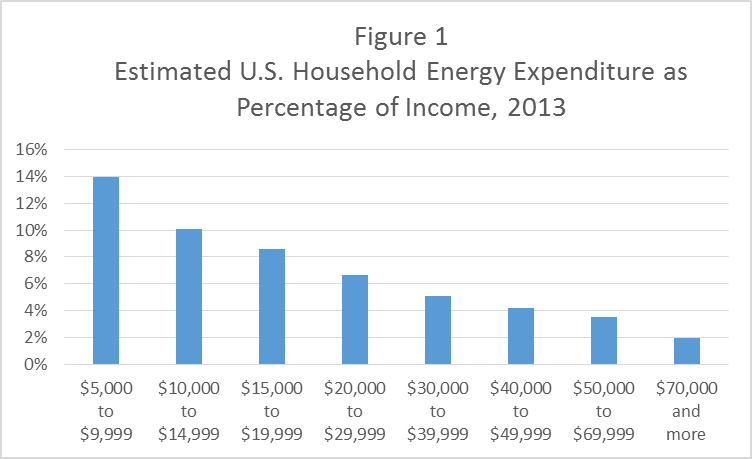 There are numerous other problems with the proposed rules, including inefficiency, double counting of benefits, underestimation of costs, and the fact that the proposed rules require states to impose costs on their neighboring states, also a violation of the dormant commerce clause. Perhaps most damning is that the proposed rule will not achieve the emission reductions claimed by EPA, due to leakage. The rule does not account for the significant trend in the U.S. of lower emissions due to technical innovation and market forces. As we note:

U.S. energy-related carbon dioxide emissions (CO2) have declined in five of the past eight years. This trend has been led by emissions reductions in the electric power sector. Electricity demand growth has been lower than in the past and at the same time the power sector has become less carbon-intensive (measured as CO2 emitted per kilowatt hour of generation). Total emissions from the electric power sector in 2013 totaled 2,053 million metric tons (Mmt), about 15% below its 2005 level. A modest increase in intensity occurred in 2013 (mostly due to weather, which drove up energy demand). According to the Energy Information Administration, the U.S.’s intensity now compares favorably with most other countries. Similarly, the carbon (equivalent) intensity of the U.S. has declined between 2000 and 2013.24 While the U.S.’s total emissions rank high, its intensity ranks better than most other countries, especially some of the large industrializing developed countries, such as China. The Clean Power Plan might actually result in an increase in global emissions, as businesses-especially in manufacturing, but perhaps even agriculture- choose to move production to other countries where emissions intensities are much worse but energy prices more reasonable (in part due to the absence of CPP-type policies).