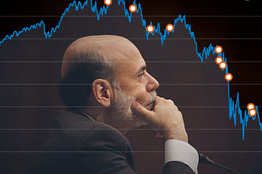 Ben Bernanke has four more years at the helm of the Federal Reserve… for better or worse. The Wall Street Journal has the story.

Interestingly, the vote was relatively divided.

The GOP gave Bernanke a pretty stern grilling during the confirmation hearings. And many within the GOP base wanted to see Bernanke go since he did 1) support the bailout, 2) supported spending, 3) supported the Obama regulatory reform platform, mostly anyway. And since 11 Democrats voted against him, in theory the GOP could have blocked his second term if they wanted to.

But that is not how the chips fell.

Mr. Tough on Wall Street Sen. Chris Dodd himself even voted for confirmation. Meanwhile Sen. Ed Kaufman, who took over Biden’s seat, voted nea in a slight affront to the administration.

A strange tally it was today, but Bernanke comes out the winner and gets a chance to fix a mess he participated in creating and has had a direct role in perpetuating.