The U.S. population of people over the age of 75 is expected to nearly double over the next two decades. The rapidly aging population will place a significant burden on the health care system and will likely contribute to workforce shortages in several health care occupations. These impacts could be particularly severe in the long-term care industry, so comprehensive reforms are necessary to address existing problems in the long-term care industry and prepare for the growing demand in the coming years.

Setting aside the semantics around infrastructure and the political feasibility of either plan, the idea of shifting resources toward in-home care has some merit.

Yet, federal Medicaid policy is biased toward nursing homes. State Medicaid systems are required to cover long-term care services in nursing homes, but most home and community-based services are optional to cover. Many states also cap the number of HCBS enrollees, resulting in waitlists. In 2018, 41 states had waitlists for HCBS waivers—totaling nearly 820,000 people with an average wait time of over three years.

The home health care industry is already facing significant workforce challenges. Low wages and poor benefits contribute to high turnover rates and make it difficult to fill some vacant positions. The majority of home-based care is provided by unpaid family caregivers. However, the caregiver support ratio (the number of potential family caregivers aged 45-64 available for each person aged 80 and older) is expected to decline over the next several decades, driving greater demand for paid home health care workers. 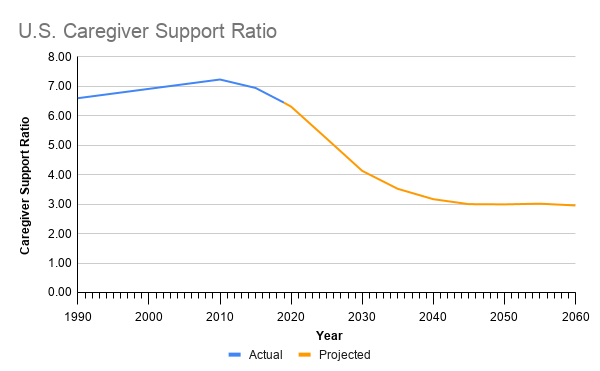 As the country prepares to serve its aging population, the Biden administration has identified legitimate problems in long-term care. The question, however, is whether an additional $400 billion in Medicaid spending is the best solution. It is not.

President Joe Biden’s $400 billion plan is a one-time cash infusion spread out over eight years that would do little to address structural problems in the long-term care industry. Instead, it would simply double down on a broken system by throwing more federal money at the problem.

Hopefully, the administration’s emphasis on long-term care will at least generate a much-needed conversation about the need to fundamentally rethink our current approach to long-term care.

Americans are largely unprepared to finance their long-term care needs. As a result, public spending—particularly through Medicaid—tends to dominate in the market for long-term care. In 2018, Medicaid accounted for 52 percent of all long-term care spending. Meanwhile, private insurance and out-of-pocket spending accounted for just 11 percent and 16 percent respectively. The remaining share came from other public and private sources, including the Veterans Health Administration, Children’s Health Insurance Program, and charities.

The outsized role of Medicaid in long-term care financing is both straining government budgets and contributing to the lack of access to home-based care and the workforce shortages the Biden administration is aiming to address. Expanding the role of private payment sources would help rein in state and federal spending, expand access to home-based care, and increase wages for long-term care workers.

Part of the problem is that Medicaid “crowds out” private long-term care insurance. As the Commission on Long Term Care noted in a 2013 report to Congress:

The structure of federal health care programs, particularly Medicaid, discourages individuals from taking responsibility for their future long-term care needs. Medicaid resources need to be more carefully targeted to those individuals the program was intended to serve—the needy and the poor.

The report pointed to several reforms that would restructure incentives and provide greater flexibility for insurers to design policies that are more affordable and sustainable. Tightening eligibility rules and strengthening asset recovery efforts, for example, could go a long way.

A whole cottage industry of elder law attorneys exists to help wealthier Americans restructure their assets in order to qualify for Medicaid benefits. As a consequence, state Medicaid systems are stretched thin and provide insufficient coverage for those who truly need it.

Rethinking our approach to long-term care financing and placing a greater emphasis on private payment is a necessary step to addressing the workforce challenges in the long-term care industry.

Without more careful targeting of Medicaid eligibility, increasing reimbursement rates would lead to even higher costs for state and federal governments. Rising Medicaid expenditures would compete with other spending priorities such as education and transportation. Those budget concerns have already motivated states to cap the number of Medicaid home and community-based services (HCBS) waivers they offer, leading to long waiting lists for home-based care. Again, expanding the role of private payment sources would help solve the problems identified by the Biden administration. Achieving meaningful reform in this area would be a significant undertaking, but would be far more beneficial than merely prolonging the status quo.

Aside from issues with financing long-term care, there are a number of regulatory reforms that could expand access to home-based care while reducing costs for consumers. These reforms would have a substantial impact on long-term care services, and many could be pursued by states regardless of action at the federal level.

Federal Medicaid rules aren’t the only source of bias toward institutionalized care over home-based services. State-level certificate of need (CON) laws limit the growth of home health services, pushing more seniors into nursing homes. Certificate of need laws require prospective care providers to demonstrate that there is an unmet need in the community before establishing or expanding health facilities or services. Currently, 14 states impose CON requirements on home health agencies.

Research suggests that certificate of need laws serve to limit competition and prevent the expansion of home health industry capacity. The authors of a 2016 paper on the effect of CON laws on Medicare and Medicaid spending on nursing home care and HCBS concluded that CON laws “act as a direct impediment of expansion of home- and community-based care” and “provide nursing homes with some degree of market power that does not allow the market to respond freely to price changes or federal policies.” Other research suggests certificate of need requirements are associated with lower quality ratings among home health agencies.

Increasing the use of telehealth in home settings would also be beneficial for those seeking to receive long-term care in their homes. Telehealth allows patients to connect with health care providers remotely via telecommunications or digital communications technologies. For example, various wearable devices and monitoring systems enable care providers to track patients’ health status and mobility. The technology can also be used by aides and family caretakers to consult specialists without requiring an in-person visit. Innovative care models that rely on telehealth have the potential to alleviate workforce demands, reduce costs, and improve patient outcomes.

Unfortunately, state and federal regulations can present an obstacle to the use of telehealth. At the federal level, outdated laws that are intended to protect patient privacy haven’t kept pace with technological innovation. These rules may hinder the use of some communications and remote monitoring technologies. At the state level, licensing laws may limit the ability of providers to practice telehealth across state lines. State laws may also create unnecessary hurdles to establish a patient-provider relationship. These requirements can make it difficult for providers to prescribe medications via telehealth without an initial in-person visit––a potential challenge for many home-bound seniors. Lawmakers should consider reforms that would maximize flexibility in the use of telehealth technologies and avoid policies that could inhibit future innovation.

Expanding the role of direct care providers could also reduce costs while providing a channel to raise wages. Currently, home health workers are very limited in terms of what they can do on the job due to what is referred to as their scope of practice (SOP). State-level scope of practice restrictions prevent home health aides from performing many routine tasks, such as administering eye drops or oral medications. According to the MIT Sloan School of Management’s Paul Osterman, expanding the SOP of home health workers could go a long way toward improving the quality of their jobs and increasing the efficiency of care delivery. Osterman argues that allowing these workers to take on more responsibilities would help boost their wages. Even with higher wages, these reforms could reduce overall costs by shifting some tasks away from higher-paying occupations such as registered nurses.

While raising wages and leveraging innovative technologies could alleviate some pressure on the long-term care workforce, the existing labor pool may still be insufficient to meet future demands. Expanding immigration opportunities for long-term care workers offers a solution.

Despite the importance of immigrant workers in the long-term care workforce, they typically don’t qualify for employment-based visa programs. Instead, most immigrant long-term care workers come to the United States on family-sponsored, refugee, or diversity visas. Some visas are targeted toward “skilled” workers that include many professional health care occupations such as physicians and advanced practice registered nurses. However, long-term care aides are not considered skilled workers under these programs.

Creating a state-based visa system would decentralize decisions about which types of workers should be prioritized by immigration policy. Under such a system, states could allocate visas according to their own workforce needs rather than rely on federal bureaucrats’ definitions of “skilled” or “unskilled.” The current one-size-fits-all approach pits the interests of states against each other, resulting in unnecessary conflict and, in some cases, a mismatch between supply and demand for different types of immigrant workers. Canada and Australia have implemented similar regional immigration programs that could serve as models.

Alternatively, lawmakers could pursue reforms specifically targeted toward bolstering the long-term care workforce. One solution proposed by long-term care advocates is to create a new guest-worker program that would extend temporary visas to qualified, English-speaking, foreign-born workers hired to positions that cannot be filled by native-born workers. The workers would be admitted for a fixed, three-year period that could be renewed one time for a total of six years. Another solution would be to simply include long-term care workers under existing skilled worker programs.

Such reforms may experience newfound support in light of the COVID-19 pandemic, which has highlighted workforce shortages across the health care industry. For example, a recent bipartisan effort in Congress would recapture 40,000 unused visas and allocate them to foreign-trained physicians and nurses to help combat the pandemic. As those shortages continue to grow in the coming years, more permanent efforts may gain similar traction among lawmakers. It is essential that lower-skilled long-term care occupations not be excluded from potential reform efforts.

Whenever lawmakers decide to act, it is clear that the long-term care workforce would benefit from immigration reform. Moving forward, policy debates surrounding both immigration and long-term care reform should consider the relationship between the two.

President Joe Biden’s recent proposal identifies some of the right problems facing the long-term health care services but, unfortunately, does not offer meaningful solutions to the challenges posed by a rapidly aging population. Rather than simply throwing more money at the problem, tackling the looming long-term care crisis will require thoughtful, meaningful policy reforms.

The most significant challenge to the industry is to rethink the current approach to financing long-term care services. Reducing the role of Medicaid in favor of private payment would help expand access to health care and alleviate workforce pressures by increasing wages.

Regulatory reforms could expand the supply of home-health providers, unlock the potential of technological innovation, and better leverage the role of home-health workers.

Combined, these policy reforms would help address the structural problems affecting the home-health care industry while improving access, reducing costs, and giving home-health workers a much-needed pay raise. The scale of the challenge presented by America’s aging population demands such comprehensive solutions, not just a massive influx of federal dollars.