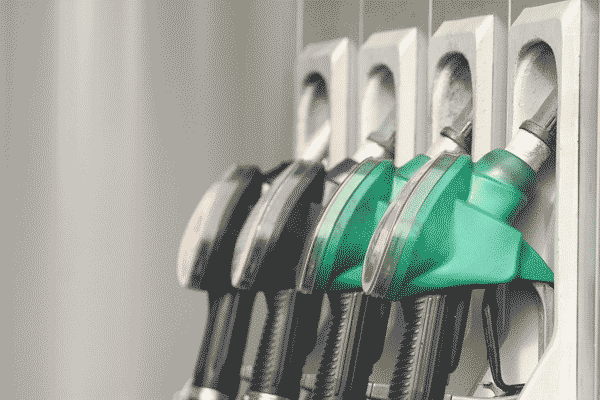 In 1975, Congress enacted Corporate Average Fuel Economy (CAFE) standards as part of the implementation of the Energy Policy and Conservation Act. The intent was to reduce oil consumption in the wake of the Organization of Petroleum Exporting Countries (OPEC) oil embargo of 1973–1974 that had limited oil supplies and spiked prices. Since 1986, the National Highway Transportation Safety Administration (NHTSA) has been tasked with setting the actual standards. In 2010 NHTSA and the Environmental Protection Agency (EPA) jointly developed a new set of standards to meet the requirements of both the Energy Policy Conservation Act and the Clean Air Act.

This brief describes in plain English the development of the CAFE standards and how they function. 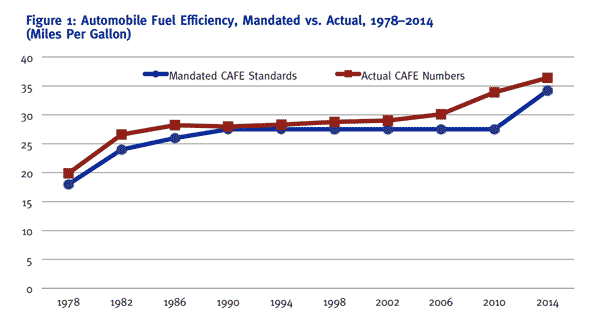 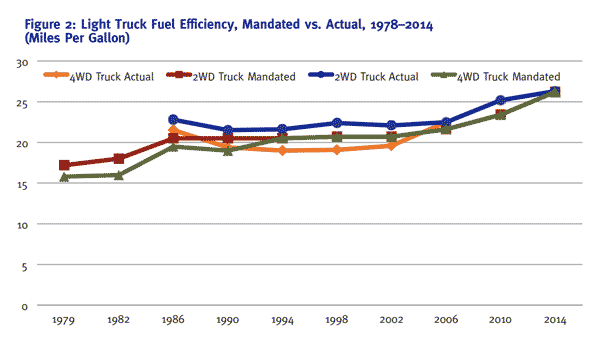 How Fuel Efficiency Is Calculated in CAFE Standards

To most of us, “average” refers to what mathematicians call the “arithmetic mean.” For example, if we want to find the “average” weight of three people, we would first calculate their total weight and then divide by three to calculate the arithmetic mean. That is not how “average” fuel efficiency is calculated under the CAFE standards.

In the original CAFE standards, the “average” used is what is known as the “harmonic mean.” To understand what this is and its implications, it is helpful to use an example. Consider a car manufacturer that produces two types of passenger cars, a Big and a Small. Each year the manufacturer produces 300 Bigs, rated at 15 mpg, and 1000 Smalls, rated at 30 mpg.

Now, dividing the total number of miles travelled by all the cars (1,300 x 10,000 = 13 million) by the number of gallons used (533,333), we get an average fuel economy of 24.4 mpg.[4] If the number of miles travelled by each vehicle is approximately the same then this ”average”—known as the “harmonic mean” [5]—is more accurate. Accordingly, NHTSA and the EPA use the harmonic mean to assess vehicle standards for compliance.

In 1975, when the original CAFE standards were developed, the U.S. was in the middle of an oil crisis, and curtailing fuel use was paramount. The original CAFE standards were predicated on the assumption that the vehicle fleet would use less fuel each year, and they were part of a package of other government mandates, including a 55-mile-per-hour (mph) national speed limit. The decrease from 75 mph in most states was expected to save hundreds of millions of barrels of oil a year.[7] As well, the economic consequences of fuel rationing sparked consumer demand for smaller, more-fuel-efficient vehicles, powered by 4-cylinder as opposed to 8-cyclinder engines. Emotional arguments that suggested patriotic Americans should drive more-fuel-efficient cars also increased demand for smaller vehicles. Finally, carpooling was increasing rapidly, in part due to incentives from both the government and private sector.

However, after the oil embargo, as gas prices dropped, vehicle purchasing patterns changed. In the 1980s and 1990s, Americans began buying larger cars and more light-duty trucks. The classification of SUVs as light-duty trucks, which allowed them to be subject to less-stringent fuel economy standards, also played a role. In 1987, the 55-mile-per-hour speed limit—always unpopular, challenging to enforce, and failing to meet its fuel-savings goal—was repealed. With America’s population and job locations decentralizing, carpooling has decreased by more than 50% from its high in the 1990s,[8] resulting in an increase in the average number of miles driven per vehicle. With these changes, meeting CAFE standards is far more challenging.

Starting in 2005 for trucks and 2011 for all vehicles, the standard is based on one specific attribute: a manufacturer’s collective vehicle footprint. The formula multiplies every vehicle’s wheelbase by its average track width for each manufacturer. This creates a relatively simple inverse-linear formula with cutoff values. The attribute-based formula produces one number for each automaker. So while each model sold does not have to achieve a specific target, the automaker’s fleet on a whole must meet its target. This method helps balance earlier standards, which were biased against automakers whose overall vehicle lineup was fuel-efficient, but sold one or two models (typically work trucks) that were not fuel-efficient.

In 2012, NHTSA and the EPA issued joint standards for 2017–2025. While NHTSA’s standards continued to focus on fuel efficiency, the EPA’s more-stringent regulations targeted reductions in carbon dioxide emissions (greenhouse gas emissions) and not fuel efficiency. NHTSA increased the CAFE standards to 41 mpg by 2021 and 49.7 mpg by 2025. The EPA’s standard of 163 g/mi of CO2-equivalent emissions[11] effectively increased standards to 54.5 mpg by 2025. This 54.5 mpg 2025 standard is the first one benchmarked to emissions and not gasoline consumption.[12]

While NHTSA is required by law to consider “feasibility of available technology” for its fuel economy standards, the EPA has no such obligation for its standards. As a result, the EPA could mandate standards that are not technologically feasible using currently available technology. Some analysts argue the 54.5-mpg standards may not be technologically feasible while maintaining the current fleet mix (which is characterized by a high concentration of sport utility vehicles) and would necessitate a dramatic change in vehicle purchasing habits.[13]

Details on the Standards

Calculating emissions accurately is increasingly complex. Instead of two separate standards, as of 2005 a single “fleetwide” standard is used. Up until 2011, the measurements include three different fleets: “domestic passenger cars,” “imported passenger cars,” and “light-duty trucks.” Imported cars were calculated differently from domestic vehicles, since they started from a lower fuel-efficiency base when the CAFE standards were implemented in the 1970s.

As before, the standard is calculated using the harmonic mean, taking into account anticipated annual mileage of each of the three types of vehicle, as well as their “footprints.” The calculations are complex because the formula requires two different fuel economy targets (cars and light-trucks) and several adjustment factors.

For light duty trucks there is yet another factor to consider. The light duty standard provides for a floor term to prevent any footprint target from declining between model years. For example, without the floor term the target could actually decline from 40 mpg in 2027 to 38 mpg in 2028. The idea is to treat smaller and larger vehicles in an equivalent way since smaller vehicles would have an easier time meeting the standard.

The original CAFE standards applied to the total fleet of vehicles in each class sold each year by each manufacturer. For manufacturers with multiple models, some of which had lower fuel economy than the relevant standard, the standard could only be met by ensuring that consumers purchase a large number of high-mpg models.

Both the NHTSA and EPA standards offer certain flexibilities, termed “components,” to help manufacturers comply with the standards. The first component is a credit trading system that allows manufacturers to carry efficiency and greenhouse gas credits forward by up to five years and backwards by up to three years to achieve compliance and avoid fines. Manufacturers can transfer credit between cars and trucks and trade credits with other manufacturers. Carbon dioxide credits generated for EPA compliance from model year 2016 and before can be carried forward up to model year 2021.

The second component is air conditioning efficiency improvements as compliance credits. For the NHTSA program, credits depend on fuel consumption reductions. The EPA allows credits for reductions in fuel use and refrigeration leakage and alternative refrigerants with lower global warming potential.

The third component is off-cycle credits, potentially including solar panels on hybrid vehicles, active aerodynamics or adaptive cruise control. Manufacturers can also apply for credits for newer technologies if they can provide sufficient greenhouse gas emission reduction data to the EPA.

The fourth component is for zero-emission, plug-in hybrid, and compressed natural gas vehicles. To encourage use of these vehicles, the EPA has included a credit multiple for model years 2017–2021. All-electric and fuel cell vehicles count as two vehicles in 2017 and phase down to 1.7 by 2021; plug-in hybrid electric vehicles begin with a multiplier of 1.6 in 2017 and phase down to 1.3 by 2021. Electric vehicles sold during this time period will be credited with emitting no carbon dioxide. After 2021 the multiplier disappears and a cap on the number of vehicles that qualify is applied. For manufacturers that sell 600,000 vehicles between 2019 and 2021, the cap is 300,000. For manufacturers that sell fewer than 600,000 vehicles, the cap is 200,000. For electric and fuel cell vehicles over the cap, manufacturers need to account for upstream emissions such as electricity used to generate hydrogen production. This cap only applies to EPA calculations, as NHTSA has legal concerns about credit multipliers.

The fifth component is for “truck hybridization.” Hybrid pickup trucks that capture 15% to 65% of “braking energy” (recover energy loss through friction in braking and apply it to power the vehicle), are eligible for a per-vehicle credit of 10 g/CO2 per mile, per model years 2017–2025, if the technology is included in 20% of the company’s model year 2017 full-size pickups and 80% of model year 2021 vehicles. Pickup trucks in which at least 65% of braking energy is recaptured would be eligible for a credit of 20g/CO2 per mile, assuming the technology is used in 20% or more of a company’s full-size pickup trucks.

What Happens When CAFE Standards Are Not Met

In 2016, with little notice and no public hearing, NHTSA announced plans to double the fines for failing to meet CAFE standards from $5.50 per 0.1 mpg to $14.00. The fine is applied to each 0.1 mpg the automaker falls short and multiplied by the number of vehicles sold in a model year. Companies must satisfy both EPA and NHTSA standards. Manufacturers passing EPA’s greenhouse gas emissions standards that fail NHTSA’s CAFE standards still pay the fine.

While the original CAFE standards sought to drive automotive innovation to curtail fuel consumption, the purview of current standards has been expanded to address emissions of greenhouse gases. In the process, the standards have become increasingly complex. Future versions of CAFE standards may also seek to take into account other factors such as the environmental impact of electric vehicles’ battery disposal, or of hydrogen vehicles’ fuel transport effects. As the standards become more complex and administratively burdensome, legitimate questions arise as to their suitability for achieving fuel efficiency and environmental objectives. Additionally, CAFE standards are increasingly at odds with Americans’ preference for larger vehicles, including trucks and SUVs, which are generally less fuel efficient, calling into question their feasibility. Other briefs in this series will consider the implications of CAFE standards in more detail.

[3]     See http://www.c2es.org/federal/executive/vehicle-standards for more information on the difference between the arithmetic and harmonic mean.

[11]   To measure fuel economy, the U.S. now uses “grams of Carbon Dioxide equivalent (CO2e)”. CO2e units are used because different greenhouse gases have different “global warming potentials.” For example, a single molecule of nitrous oxide (N2O) results in about 300 times the amount of warming as a single molecule of CO2.[11] So, simply adding emissions of carbon dioxide (CO2) and nitrous oxide (N2O) would produce an inaccurate measure of warming potential.

[12]   The EPA’s power to regulate greenhouse gas emissions (and thus fuel economy standards) was challenged, but the Supreme Court upheld the decision to regulate GHGs, citing an earlier Supreme Court decision that determined carbon dioxide and other greenhouse gases to be pollutants that can be regulated. While these decisions did not change the standards, they set the legal basis for the EPA’s regulation of CO2 emissions from cars.